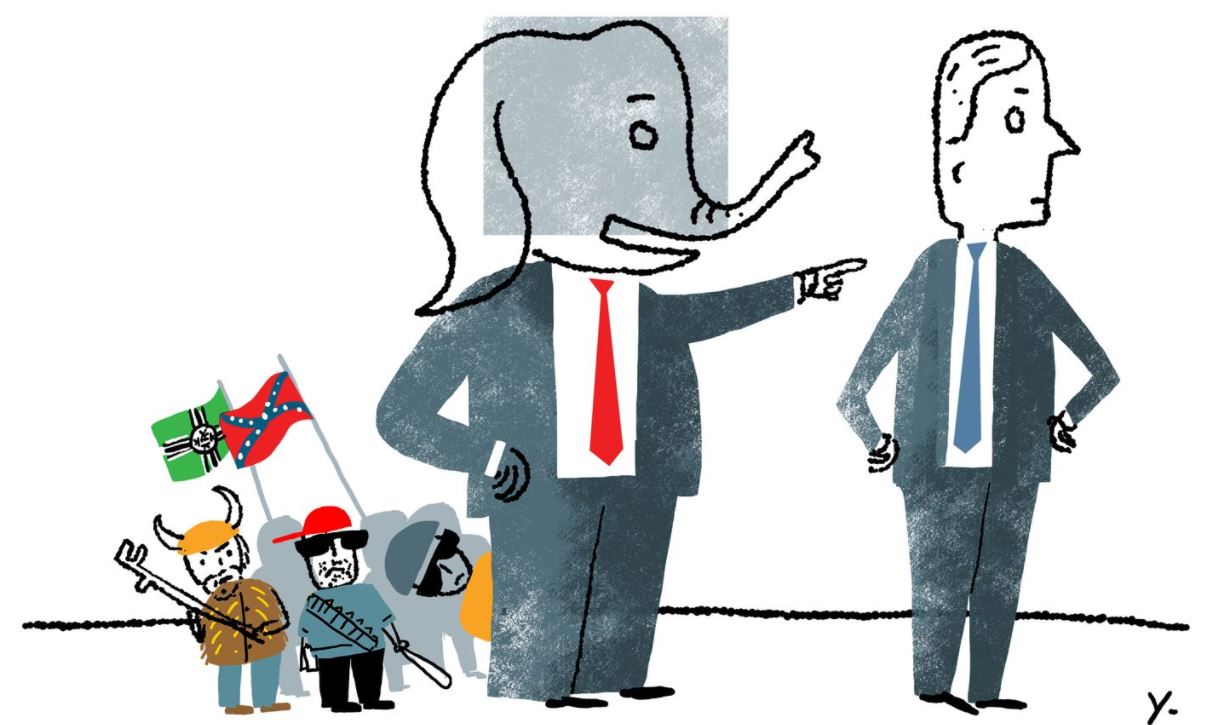 Editor’s note: Do you need to guess how our US Rep Greg Steube voted? Really?

For more than five years, I begged Republicans to reject the creeping anti-Semitism Donald Trump brought to the party, noting on the eve of the 2016 election that “when a demagogue begins to identify scapegoats, the Jews are never far behind.”

But I never expected I would see in my lifetime, in the United States of America, what occurred on the floor of the House this week. One hundred ninety-nine Republican members of Congress rallied to the defense of a vile, unapologetic anti-Semite in their ranks who calls for assassination of her opponents.

This is more than a Republican problem; it’s an American problem. You don’t have to be a scholar of 20th-century Europe to know what happens when the elected leaders of a democracy condone violence as a political tool and blame the country’s ills on the Jews.

Rep. Marjorie Taylor Greene (R-Georgia), who is quickly becoming the de facto face of the Republican Party, has suggested that the deadly neo-Nazi rally in Charlottesville, where white supremacists chanted “Jews will not replace us,” was actually an “inside job” to “further the agenda of the elites.”

She shared a video in which a Holocaust denier claimed that an “unholy alliance of leftists, capitalists and Zionist supremacists have schemed to promote immigration and miscegenation” with the purpose of “breeding us out of existence in our own homelands.”

She posed for campaign photos with a white-supremacist leader and then refused to renounce the man.

She approved of a claim that the Israeli intelligence service assassinated John F. Kennedy, and she speculated that wealthy Jewish interests — the Rothschilds, a target of anti-Semites since the 19th century — set forest fires in California using lasers from space.

This isn’t idle bigotry, for she “liked” a social media suggestion that “a bullet to the head would be quicker” to remove House Speaker Nancy Pelosi (D-Calif.), who has committed “a crime punishable by death.” She posted on social media about hanging Barack Obama and Hillary Clinton, approved of a suggestion that FBI agents be executed, and posted a photo of herself with an automatic weapon next to three Democratic members of Congress, calling herself their “worst nightmare.”

On the House floor this week, she offered no apology and no direct mention of her anti-Semitic and violent statements. Using Christ-on-the-cross imagery, she condemned those who would “crucify me in the public square for words that I said, and I regret, a few years ago.”

But she didn’t regret them. She had tweeted the night before: “We owe them no apologies. We will never back down.” She retweeted an article featuring another QAnon adherent attacking the Republican Jewish Coalition. And several Republican colleagues gave her a standing ovation Wednesday night when she delivered a private speech that Republicans said was similar to the unrepentant one she gave in public on Thursday.

“Marjorie Taylor Greene will be remembered for breaking new ground for her wild anti-Semitism,” Jonathan Greenblatt, head of the Anti-Defamation League, told me after the vote. Greenblatt, whose group has tracked all-time-high levels of anti-Jewish incidents during the Trump years, wrote three letters to House Minority Leader Kevin McCarthy (R-Calif.) about Greene since her nomination, and he urged McCarthy to remove her from committees. Greenblatt received no reply.

Greene’s ugly pronouncements about Muslims and Black people, and her harassment of school-shooting survivors and families of victims, are no less reprehensible. But the rallying around this unrepentant anti-Semite by Republicans is an ominous new frontier. The Republican Jewish Coalition said it is “offended and appalled by [Greene’s] comments and her actions.”

Yet on Thursday, House Republicans rushed to her defense. “We’ve all said things we regret,” said Rep. Jim Jordan (R-Ohio), top Republican on the Judiciary Committee.

Rep. Chip Roy (R-Tex.) protested the proceedings by forcing a vote to adjourn. “We shouldn’t be wasting the time of this body attacking a member of this body,” he said.

Rep. Tom Cole (R-Okla.) disowned Greene’s rhetoric, but what he really found “sad” and “unprecedented” was that Democrats weren’t giving her “due process.”

Rep. Ted Budd (R-N.C.) informed Democrats that “today is really about one party single-handedly canceling a member of the other party because of something said before that member was even elected.”

Republicans have used similar gaslighting in their response to impeachment. Trump helped organize a rally, incited his supporters to attack the Capitol and refused to call for an end to their murderous spree as they rampaged in search of elected officials in their hopes of overturning the election. But Democrats are the ones doing something “unconstitutional” by holding an impeachment trial after he left office?

Insurrection? Sedition? Assassination? Move on, the Republicans say. These actions and threats are mere “distractions” from the real issues.

Republicans defended Greene with absurd parallels. They attacked Rep. Ilhan Omar (D-Minn.) for past anti-Semitic statements — omitting the crucial distinction that Omar, after Democrats roundly condemned her words, said, “Anti-Semitism is real and I am grateful for Jewish allies and colleagues who are educating me on the painful history of anti-Semitic tropes. … I unequivocally apologize.”

Greene, by contrast, remained unrepentant. On Friday, she held a celebratory news conference, again refusing to recant, or apologize for, her violent and anti-Jewish words and gestures.

Would she apologize for advocating the execution of Pelosi?

“I don’t have to,” she said, calling for the journalist to apologize instead.

Would she disavow her endorsement of putting “a bullet to the head” of Pelosi?

Accusing the questioner of lying, she replied: “That’s your problem and that’s how we end news conferences.” She walked away.

In retrospect, it’s clear Trump led us to this point. In his 2016 campaign, he singled out prominent Jews as part of a “global power structure” that doesn’t “have your good in mind.” He elevated white supremacists, spoke of “blood suckers,” told Jewish Republicans they wouldn’t support him “because I don’t want your money,” and shared an image of a Star of David atop a pile of cash.

As president, he spoke of the “very fine people” marching among the white supremacists in Charlottesville. Anti-Semitic violence increased significantly: pipe bombs sent to favorite Trump targets such as financier George Soros, and the synagogue massacre in Pittsburgh, the deadliest anti-Semitic attack in U.S. history. Yet Trump continued, embracing the far-right,violent Proud Boys in a presidential debate.

As Thursday’s emotional debate drew to a close, Rep. Steny H. Hoyer (D-Md.), the House majority leader, displayed a poster taken from one of Greene’s social media posts showing her with an AR-15 next to photos oftwo Muslims and one Latina — Reps. Omar, Rashida Tlaib (D-Mich.) and Alexandria Ocasio-Cortez (D-N.Y.) — and Greene’s caption: “Squad’s Worse Nightmare.”

“They’re not ‘the Squad’,” Hoyer thundered. “They are people. They are our colleagues.”

He asked Republicans: “Imagine your faces on this poster. Imagine it’s a Democrat with an AR-15. Imagine what your response would be, and would you think that person ought to be held accountable?”

One hundred ninety-nine House Republicans looked at that invitation to assassination and voted to defend its author. God only knows what horrors they have unleashed.