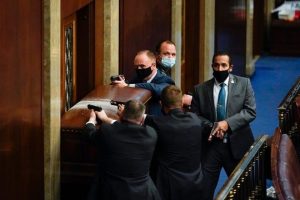 President, GOP to blame for insurrection OMG! We are now officially a Third World country! Led by a would-be dictator, emperor and king, and enabled by the majority of his party, officials and supporters.  Donald Trump’s “go home” message to the mob included talk about the “stolen” election and called essentially anyone who voted against him “evil.”  He