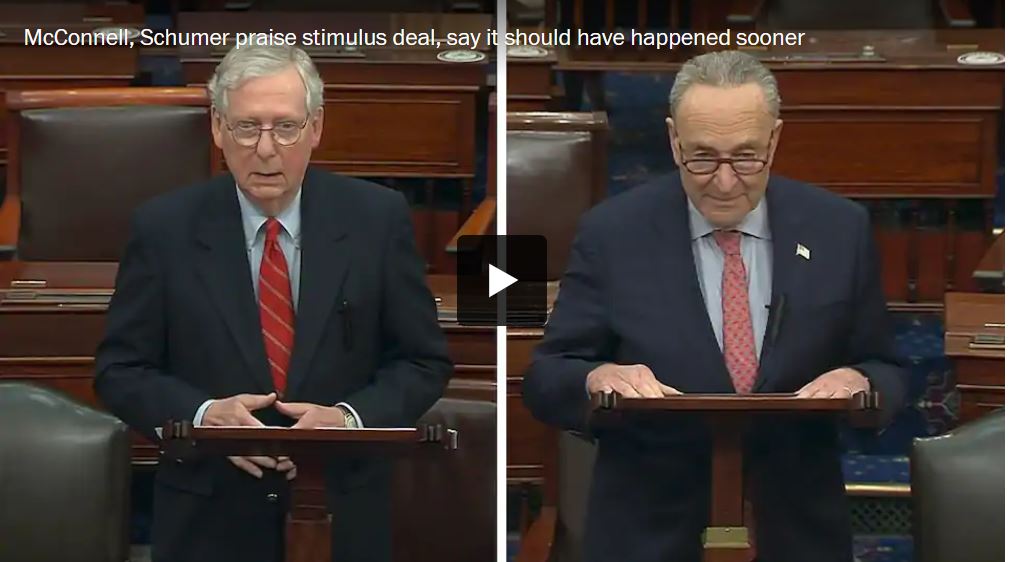 The impeachment trial of former president Donald Trump has ended with his acquittal — the second in two impeachments. Here are four final points on the trial.

No, Trump wasn’t convicted. But he suffered the most bipartisan vote ever in favor of convicting a president at an impeachment trial — and one of the most significant rebukes of a president in American history. That’s hardly nothing.

Notably, the number of GOP votes for conviction was larger than the previous number in support of proceeding with the trial. In total, 17 Republicans voted either to impeach Trump or convict him during these proceedings — with both the 10 House impeachment votes and the seven conviction votes being unprecedented.

But Cassidy’s vote might be the most significant. Burr and Toomey are retiring, and the others have been high-profile critics of Trump. Cassidy comes from one of the most conservative states in the country. Even his vote to proceed with the trial last week — after he previously voted that the trial was unconstitutional — led to predictions that he would eventually fall in line. As with several other Republicans, he risked a great deal to vote as he did.

One key vote the House impeachment managers did not get was that of another senator who had expressed openness to conviction: Senate Minority Leader Mitch McConnell (R-Ky.). McConnell suggested in a speech after the vote that he indeed blamed Trump, saying, “President Trump is practically and morally responsible for provoking the events of the day.” But he said Trump’s status as former president rendered the issues at hand moot.

Given the historically bipartisan votes, though, you have to wonder whether, had McConnell decided to press the issue, he could have assembled enough votes for a conviction.

It probably never would have happened, but it was closer than most predicted.

As the trial began on Tuesday, a disconnect emerged. Democrats said this situation was vitally important — so important that they needed to impeach Trump for the second time and then, for the first time in history, hold a Senate trial for a former president — yet they didn’t plan to call any witnesses to unearth new evidence.

For a brief period Saturday, given that several huge questions remained unresolved, it appeared they were reversing course. They called for a subpoena of Rep. Jaime Herrera Beutler (R-Wash.) to describe Trump’s phone call with House Minority Leader Kevin McCarthy (R-Calif.) during the Capitol riot.

Then they backed off. A deal was cut under which Beutler’s statement suggesting Trump had spoken approvingly of the Capitol rioters in real time would be entered into the trial record, and no witnesses would be called.

It’s easy to call this a cave. As many noted, Democrats seemed to have the votes for witnesses, with several Republicans voting with them on the broader question of whether to allow witnesses. Enough Republicans appeared to be onboard and conviction-curious to hear from the likes of Herrera Beutler and others. Trump’s lawyers could have requested all the witnesses they wanted — and they threatened to call hundreds — but each would have required a vote. Democrats held the cards.

And then they laid down their hand.

We’ll surely learn how this all came about. Democrats clearly wanted to get past the trial and move on to passing President Biden’s agenda, including coronavirus relief. They also knew that virtually nothing would sway the 17 Republicans needed for a conviction.

But then we come back to what was mentioned at the top: They said this was vitally important. They said this was the worst offense a U.S. president had ever committed. They said accountability was required. Even if Republicans would never have provided enough votes, there is still value in putting all of this on the record — and maybe even, however unlikely, forcing those Republicans to confront the evidence the Democrats said was incontrovertible.

Democrats passed on even really trying. It just doesn’t speak to the idea that this was the worst high crime in American history.

But it’s not just because Trump didn’t testify or comment that we don’t know that; it’s also because Democrats opted not to press this further. Even many Republicans have faulted Trump for his conduct both before and during Jan. 6. Why not put them in the position of voting against even more compelling evidence — evidence that Democrats have said is out there for the finding?

Raskin was talking about Republicans being sheep. But Democrats didn’t exactly make themselves wolves.

The overriding reason for Trump’s acquittal was the alleged unconstitutionality of the proceedings. Republicans who have raised concerns about Trump’s actions or have declined to vouch for him have repeatedly signaled this would be why they vote against conviction. McConnell after the vote issued a damning indictment of Trump, suggesting he had indeed incited the attack, which others including Sen. Shelley Moore Capito (R-W.Va.) echoed even while voting against conviction “solely” on constitutional grounds.

Those statements reinforce just how bad even Trump’s allies decided his conduct was, and they shouldn’t be glossed over.

But it’s also the definition of a technicality — and it arguably doesn’t hold up.

As even many conservative legal scholars argued in the past week, the Senate had a duty to evaluate the evidence against Trump. There were legitimate questions about whether the Senate could hold an impeachment trial for a former official or a former president — though most legal analysts agreed it could — but it’s never been tried in court.

But the courts almost always defer to Congress on such things, because of the separation of powers. Thus, when the Senate itself voted that it had the jurisdiction to try Trump, that arguably settled the issue. The Senate voted 56 to 44 that it had jurisdiction.

Lawmakers are allowed to vote to acquit Trump for whatever reason they choose. The rules in such a trial are not the same as in a criminal trial, in which jurors at this stage would be required to disregard previous rulings and decide the case on the merits.

They would argue they’re upholding the Constitution, but the process moved beyond the constitutionality question. Through a constitutionally prescribed process, the lawmakers elected by the people to make such decisions — and who could be held accountable for them — decided to press forward. And the others could just as well cite this technicality while also addressing Trump’s actions, if they so chose.

Most of them aren’t, for a very obvious reason.

4. The country’s next step

Democrats had plenty of reason to tell themselves it was okay to move on from this without pressing harder for a conviction.

One of them is the looming congressional, 9/11 commission-like investigations into what happened that day. Whatever we might not have learned from witnesses in this impeachment trial, we could learn in such an inquiry.

Another is that Trump could conceivably face criminal liability for his actions — which would render the constitutional question and his disqualification from holding high office in the future less relevant. Prosecutors in Fulton County, Ga., are investigating Trump’s attempts to overturn the election result in Georgia, including a phone call in which he asked Georgia Secretary of State Brad Raffensperger (R) to “find” enough votes to do so. Trump’s lawyers this week even cited this possibility, suggesting that was actually the venue for such charges. McConnell, too, referred to Trump’s potential legal liability, saying he “didn’t get away with anything yet.”

We might learn plenty in the months and years to come. But there is a clear political disincentive when it comes to criminal charges against a former president. Anything that results from a congressional inquiry will be older news by then. Even in the month-plus since the Capitol riot, the unquestionably tragic scenes fade somewhat from memory. I’m sure I’m not the only one who watched the videos played in the past week and realized how much I’d forgotten — or potentially blocked out — from that day. Acting quickly is fraught because you might not know everything, but waiting also carries drawbacks.

Legally speaking, incitement is a high bar to clear. It requires knowledge of a person’s frame of mind and/or a lot of evidence about how that person might reasonably have understood their words would be perceived. Trump has almost always offered mixed messages that provide him plausible deniability while suggestively alluding to violence by his supporters or, at least, painting a drastic enough picture that might lead to such drastic measures.

But we also know not just that many people — including Trump’s allies — suggested that his words could lead to violence but also that many Republicans suggested in the aftermath that Trump had contributed to just that.

From here, any real resolutions when it comes to Trump’s culpability will take a very long time. If Trump is still flirting with an attempt to run for the presidency in 2024, that will remain relevant. If he’s not, it could fade even further from memory in a way that Democrats said it shouldn’t be allowed to.