Jean was an active member of our Englewood Democratic Club (EDC).

She was at our Drink Liberally event last Thursday at the Cool Pickle in Paradise restaurant.

She always had a smile on her face.

Last Thursday, we talked about the Gulf and Red Tide.

She swam every morning that was possible in the Gulf.

Last Thursday, she reported no red tide at Englewood Beach and her swim was wonderful.

We, and all of Englewood, will miss our “Peace Lady”.

The Englewood Review twice published an interview with this wonderful woman. Read it HERE.

But there’s a really good chance you’ve seen her, maybe even interacted with her.

For as many years as most can remember, Jean Ranallo stood in the hot sun, cold wind and sometimes even rain on the corner of West Dearborn Street and South Indiana Avenue in Englewood on weekends with a simple message — “Peace!”

She drew plenty of horn honks and maybe a balled fist or two as she vigorously waved her sign.

Her mission in life, it seems, was to bring everyone together and live in peace.

Her activism will be missed by many who stood shoulder- to-shoulder with her in various protests and calls for action.

“She was an integral part of our community,” John Munn said. “She deserves accolades for standing on that corner every weekend. She was there just this past weekend.

Jean Ranallo from Englewood, left, holds her peace sign during a rally in North Port in this Feb. 25 file photo. Motorists were likely to see her at Dearborn Street and State Road 776 in Englewood. SUN PHOTO BY TOM O’NEILL

“I saw her first on the corner and she would stand there Saturdays and Sundays,” he said. “She told me she did that for 30 or 40 years. She believed peace could be achieved if everyone worked together. She hated war.

“She was not a rabble- rouser. She always had a smile.”

Ranallo was involved in the Englewood community and could often be found at the Elsie Quirk Library. She was also a frequent writer of letters to the editor in The Daily Sun. Her final letter, which the newspaper received Monday, is being published today.

When Ranallo wasn’t waving signs or organizing events, she swam. Almost every day, no matter the weather, she could be found practicing her stroke early morning in the Gulf of Mexico, often at Manasota Beach in Englewood.

She was always a good source to report if there was any red tide in the area.

Rosemary Hagen, 98, said she “will be lost without Jean (Ranallo).”

Hagen was actually waiting Tuesday for Ranallo to pick her up to attend a luncheon at the Manasota Beach Club.

She didn’t make it because she was on her way to the hospital, where she died Wednesday, Hagen said.

Hagen, who lived in Englewood from 1986 until last year, said she spent plenty of weekends on the corner with Jean and others “getting a sunburn” and holding signs.

“(Jean) was one of the most interesting people I know — and very caring,” Hagen said. “She always asked me if I wanted to go somewhere. We went to movies and all sorts of places. She would bring me and other friends her New York Times after she read it.”

Hagen said Ranallo started a “peace club” a few years ago and had dozens of people join to help her with the weekend protests. They had officers in the club and made it official.

“A couple years ago, we had a big meeting and honored Jean with a picture of a bird going into its nest,” she said.

Plans for any service for Ranallo are incomplete. 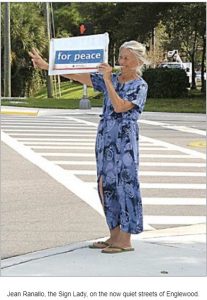 May Jean be a role model for all of us to remain dedicated to our values and principles.  Rest in PEACE, Jean.

Image Credits: Jean Ranallo, left, and Sushila Cherian protest in Punta Gorda against war in Iran in this Jan. 9, 2020 photo. While Ranallo often appeared with her sign in Englewood, she would travel to rallies in other communities. SUN PHOTO BY LIZ HARDAWAY