A hotter future is certain, UN climate panel warns. But how hot is up to us. 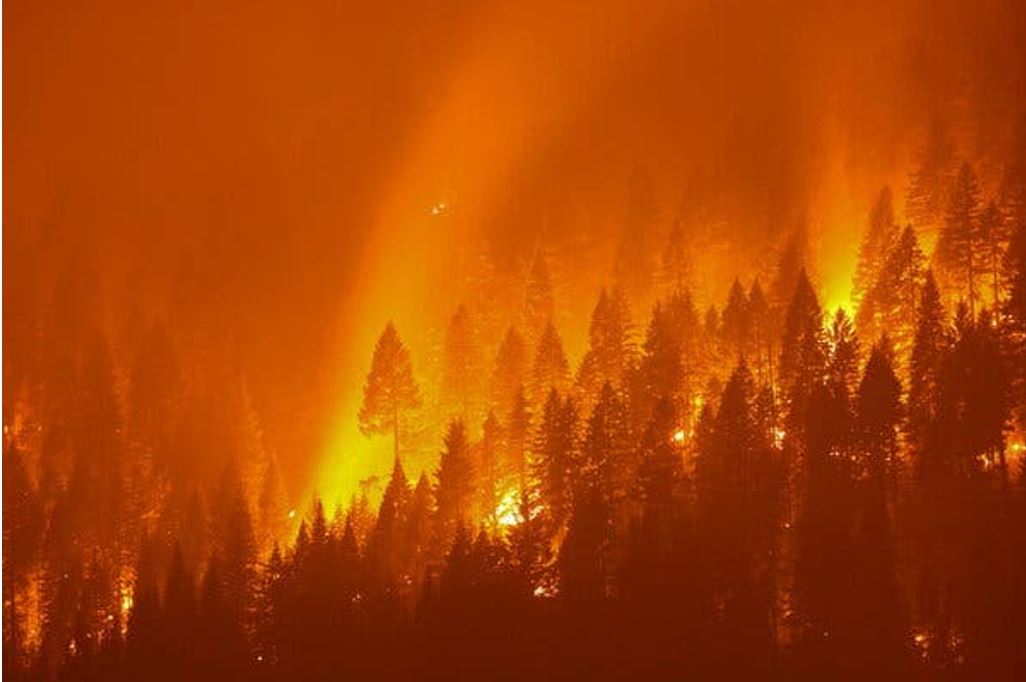 Nations have delayed curbing their fossil-fuel emissions for so long that they can no longer stop global warming from intensifying over the next 30 years, though there is still a short window to prevent the most harrowing future, a major new United Nations scientific report has concluded.

Humans have already heated the planet by roughly 1.1 degrees Celsius, or 2 degrees Fahrenheit, since the 19th century, largely by burning coal, oil and gas for energy. And the consequences can be felt across the globe: This summer alone, blistering heat waves have killed hundreds of people in the United States and Canada, floods have devastated Germany and China, and wildfires have raged out of control in Siberia, Turkey and Greece.

But that’s only the beginning, according to the report, issued on Monday by the Intergovernmental Panel on Climate Change, a body of scientists convened by the United Nations. Even if nations started sharply cutting emissions today, total global warming is likely to rise around 1.5 degrees Celsius within the next two decades, a hotter future that is now essentially locked in.

At 1.5 degrees of warming, scientists have found, the dangers grow considerably. Nearly 1 billion people worldwide could swelter in more frequent life-threatening heat waves. Hundreds of millions more would struggle for water because of severe droughts. Some animal and plant species alive today will be gone. Coral reefs, which sustain fisheries for large swaths of the globe, will suffer more frequent mass die-offs.

“We can expect a significant jump in extreme weather over the next 20 or 30 years,” said Piers Forster, a climate scientist at the University of Leeds and one of hundreds of international experts who helped write the report. “Things are unfortunately likely to get worse than they are today.”

Not all is lost, however, and humanity can still prevent the planet from getting even hotter. Doing so would require a coordinated effort among countries to stop adding carbon dioxide to the atmosphere by around 2050, which would entail a rapid shift away from fossil fuels starting immediately, as well as potentially removing vast amounts of carbon from the air. If that happened, global warming would likely halt and level off at around 1.5 degrees Celsius, the report concludes.

But if nations fail in that effort, global average temperatures will keep rising — potentially passing 2 degrees, 3 degrees or even 4 degrees Celsius, compared with the preindustrial era. The report describes how every additional degree of warming brings far greater perils, such as ever more vicious floods and heat waves, worsening droughts and accelerating sea-level rise that could threaten the existence of some island nations. The hotter the planet gets, the greater the risks of crossing dangerous “tipping points,” like the irreversible collapse of the immense ice sheets in Greenland and West Antarctica.

“There’s no going back from some changes in the climate system,” said Ko Barrett, a vice-chair of the panel and a senior adviser for climate at the National Oceanic and Atmospheric Administration. But, she added, immediate and sustained emissions cuts “could really make a difference in the climate future we have ahead of us.”

The report, approved by 195 governments and based on more than 14,000 studies, is the most comprehensive summary to date of the physical science of climate change. It will be a focal point when diplomats gather in November at a U.N. summit in Glasgow to discuss how to step up their efforts to reduce emissions.

Five key points from the thousands of pages in the new report.

A growing number of world leaders, including President Biden, have endorsed the goal of limiting global warming to 1.5 degrees Celsius, though current policies in the major polluting countries are still far off-track from achieving that target. The 10 biggest emitters of greenhouse gases are China, the United States, the European Union, India, Russia, Japan, Brazil, Indonesia, Iran and Canada.

The new report leaves no doubt that humans are responsible for global warming, concluding that essentially all of the rise in global average temperatures since the 19th century has been driven by nations burning fossil fuels, clearing forests and loading the atmosphere with greenhouse gases like carbon dioxide and methane that trap heat.

The changes in climate to date have little parallel in human history, the report said. The last decade is quite likely the hottest the planet has been in 125,000 years. The world’s glaciers are melting and receding at a rate “unprecedented in at least the last 2,000 years.” Atmospheric levels of carbon dioxide have not been this high in at least 2 million years.

Ocean levels have risen 8 inches on average over the past century, and the rate of increase has doubled since 2006. Heat waves have become significantly hotter since 1950 and last longer in much of the world. Wildfire weather has worsened across large swaths of the globe. Bursts of extreme heat in the ocean — which can kill fish, seabirds and coral reefs — have doubled in frequency since the 1980s.

In recent years, scientists have also been able to draw clear links between global warming and specific severe weather events. Many of the deadly new temperature extremes the world has seen — like the record-shattering heat wave that scorched the Pacific Northwest in June — “would have been extremely unlikely to occur without human influence on the climate system,” the report says. Greenhouse gas emissions are noticeably making some droughts, downpours and floods worse.

Tropical cyclones have likely become more intense over the past 40 years, the report said, a shift that cannot be explained by natural variability alone.

And as global temperatures keep rising, the report notes, so will the hazards. Consider a dangerous heat wave that, in the past, would have occurred just once in a given region every 50 years. Today, a similar heat wave can be expected every 10 years, on average. At 1.5 degrees Celsius of global warming, those heat waves will strike every 5 years and be significantly hotter. At 4 degrees of warming, they will occur nearly annually.

Or take sea level rise. At 1.5 degrees of warming, ocean levels are projected to rise another 1 to 2 feet this century, regularly inundating many coastal cities with floods that in the past would have occurred just once a century. But if temperatures keep increasing, the report said, there is a risk that the vast ice sheets in Antarctica and Greenland could destabilize in unpredictable ways, potentially adding another three feet of sea-level rise this century in the worst case.

Further unpredictable changes may be in store. For example, a crucial ocean circulation system in the Atlantic Ocean, which helps stabilize the climate in Europe, is now starting to slow down. While the panel concluded with “medium confidence” that the system was unlikely to collapse abruptly this century, it warned that if the planet keeps heating up, the odds of such “low likelihood, high impact outcomes” would rise.

“It’s not like we can draw a sharp line where, if we stay at 1.5 degrees, we’re safe, and at 2 degrees or 3 degrees it’s game over,” said Robert Kopp, a climate scientist at Rutgers University who helped write the report. “But every extra bit of warming increases the risks.”

Experts have estimated that current policies being pursued by world governments will put the world on track for roughly 3 degrees Celsius of warming by the end of the century. That has ramped up pressure on countries to make more ambitious pledges, beyond what they agreed to under an international climate agreement struck in Paris in 2015.

If nations follow through on more recent promises — like Mr. Biden’s April pledge to eliminate America’s net carbon emissions by 2050 or China’s vow to become carbon neutral by 2060 — then something closer to 2 degrees Celsius of warming might be possible. Additional action, such as sharply reducing methane emissions from agriculture and oil and gas drilling, could help limit warming below that level.

“The report leaves me with a deep sense of urgency,” said Jane Lubchenco, deputy director of the White House Office of Science and Technology Policy. “Now is the critical decade for keeping the 1.5 target within reach.”

While the broad scientific understanding of climate change has not changed drastically in recent years, scientists have made several key advances. Computer models have become more powerful. And researchers have collected a wealth of new data, deploying satellites and ocean buoys and gaining a clearer picture of the Earth’s past climate by analyzing ice cores and peat bogs.

That has allowed scientists to refine their projections and conclude with greater precision that Earth is likely to warm between 2.5 degrees and 4 degrees Celsius for every doubling of the amount of carbon dioxide in the atmosphere.

The new report also explores in greater detail how global warming will affect specific regions of the world. For example, while only one corner of South America to date has had a detectable rise in droughts that can harm agriculture, such damaging dry spells are expected to become much more common across the continent if global average temperatures increase by 2 degrees Celsius.

The focus on regional effects is one of the most important new aspects of this report, said Valérie Masson-Delmotte, a climate scientist at University of Paris-Saclay and a co-chair of the group that produced the report. “We show that climate change is already acting in every region, in multiple ways,” she said.

Past climate reports have focused mainly on large-scale global changes, which has made it hard for countries and businesses to take specific steps to protect people and property. To help with such planning, the panel on Monday released an interactive atlas showing how different countries could be transformed as global temperatures rise.

The new report is part of the sixth major assessment of climate science from the Intergovernmental Panel on Climate Change, which was created in 1988. A second report, set to be released in 2022, will detail how climate change might affect aspects of human society, such as coastal cities, farms or health care systems. A third report, also expected next year, will explore more fully strategies to reduce greenhouse gas emissions and halt global warming.

Brad Plumer is a climate reporter specializing in policy and technology efforts to cut carbon dioxide emissions. At The Times, he has also covered international climate talks and the changing energy landscape in the United States. @bradplumer

Henry Fountain specializes in the science of climate change and its impacts. He has been writing about science for The Times for more than 20 years and has traveled to the Arctic and Antarctica. @henryfountain • Facebook

Image Credits: The Dixie Fire, which destroyed one town and forced thousands to flee their homes in Northern California, became the second largest wildfire in state history on Sunday. Credit…David Swanson/Reuters

Facebook
Twitter
Email
PrevPreviousDeSantis’ effort to blame Covid-19 spread on migrants is short on evidence
NextWho should get the dirty water?Next