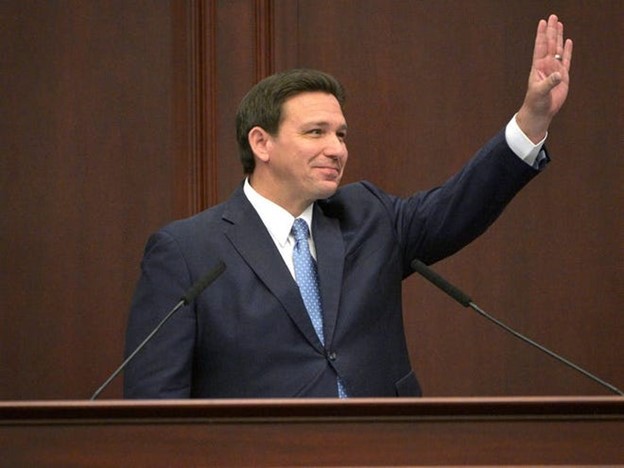 When Gov. Ron DeSantis outlined what he wanted from lawmakers on the opening day of the 2022 Legislature with his State of the State speech, Florida Republicans were paying attention.

At the 60-day session’s midpoint, helped by fellow Republicans moving in almost lockstep to meet each of his demands, the governor is close to a high-five moment.

To be sure, Florida’s legislative history is rife with tussles between the legislative and executive branches over policy and spending.

But not this year.

DeSantis, facing a re-election campaign this fall and widely seen as a future Republican presidential candidate, has an almost hypnotic hold on the Republican-led Legislature.

And GOP legislators evidently share his vision of revving-up a voting base with issues Democrats deride as divisive and part of a culture war strategy.

“When we refer to Florida as being a ‘free state,’ we’re referring to freedom to ‘do as you’re told,’ ” said Rep. Carlos Guillermo Smith, D-Orlando, chiding Republican leaders with the governor’s self-proclaimed title for Florida after resisting mask and vaccine requirements.

“We have so many bills moving through the legislative process that go hand-in-hand with what the governor is pushing,” he added.

Democrats, far outnumbered in the Legislature, snipe at the governor and other GOP leaders. But a look at DeSantis’ 35-minute State of the State address, delivered Jan. 11, and the bills moving forward show that he’s on his way to taking Florida just where he wants it.

“We should provide parents with recourse so that state standards are enforced, such as Florida’s prohibition on infusing subjects with critical race theory in our classrooms… Our tax dollars should not be used to teach our kids to hate our country or to hate each other.” —DeSantis, State of the State

Legislation modeled on what DeSantis called the “Stop Woke Act,” has cleared most of its required committees in the House and Senate and will soon be ready for a full vote.

The measures bar teaching in grades K-12 that could make individuals feel responsible for historic wrongs because of their race, color, sex or national origin.

“We shouldn’t be teaching students … that someone is automatically racist or sexist or anti-immigrant by the sheer nature of their background,” said Sen. Manny Diaz, R-Miami, a sponsor of the measure.

“As a state, we cannot be a party to what is effectively a massive human smuggling operation run by the federal government. Companies who are facilitating the movement of illegal aliens from the southern border to Florida should be held accountable… Florida should not be made to bear the burden of our federal government’s lawless open border policies.” —DeSantis, State of the State

Prodded by DeSantis, Republican lawmakers want to expand the state’s ban on “sanctuary cities” by discouraging airlines, bus companies and even social service organizations from assisting the federal government in relocating undocumented immigrants to Florida, many of them unaccompanied minors.

Under the legislation, companies could be prohibited from doing any business with Florida governments if they helped the Biden administration transport “unauthorized aliens” into the state.

While many are eventually reunited with family members or get resettlement assistance, Republican leaders say these federal relocations are intended to divert attention from the migrant influx at the border.

The GOP also repeatedly warns that those arriving from other countries bring more crime and are behind illegal drugs. Opponents of the Legislature’s push say it only fosters more xenophobia in Florida.

The 2019 law the measure is built on required local governments to assist with the enforcement of U.S. immigration laws but has been blocked as unconstitutional by a federal judge who said it was driven by an “immigrant threat narrative” advanced by DeSantis and the GOP-led Legislature.

“It is Orwellian doublespeak to invoke the concept of ‘voting rights’ to mean ballot harvesting, prohibiting voter ID and taxpayer funding of elections. Those are political concepts that erode the integrity of our elections.” —DeSantis, State of the State

DeSantis has never distanced himself from President Trump’s discredited claims that vote fraud cost him the White House in 2020. And tightening Florida’s elections laws remains a theme for the governor and GOP lawmakers this session.

The House and Senate are on track to approve a scaled-back version of an Election Crimes and Security office sought by DeSantis, who had envisioned a powerful, 52-person, almost $6 million agency ready to investigate possible voter fraud and other wrongdoing.

Lawmakers would instead add 15 staffers to the Department of State who would work with 10 assigned Florida Department of Law Enforcement agents on investigating reports of elections problems that come in, including those fielded on a tip line.

Critics worry this force could be politicized and used against groups promoting get-out-the-vote efforts in communities viewed as likely to vote for Democrats.

The legislation also adds new requirements on mail-in ballots, which had been a Trump target and subject of a law enacted last year whose constitutionality also is being reviewed by a federal court.

The latest measures would make mail-ballot voters include for the first time either the last four digits of the number from a driver’s license, state identification card, or social security card.

Supervisors also would be required to screen voter rolls more frequently to remove those no longer qualified to vote — another priority for DeSantis.

And ranked-choice voting, an election method already prohibited in state contests but gaining popularity in some cities across the country, would be banned for use by all Florida governments.

“Finally, we have an opportunity to strengthen protections for the right to life, without which the other rights mean little.” —DeSantis, State of the State

Republican lawmakers are poised to approve banning most abortions after 15 weeks of pregnancy, knocking two months off what had been the state’s 24-week prohibition. That standard was in place for decades.

A Mississippi case, awaiting a ruling from the U.S. Supreme Court, is inspiring the change. And there seems to be no reluctance among Florida lawmakers that they should wait for the justices to rule.

More than 70,000 abortions are performed in Florida each year, with the overwhelming majority occurring in the first trimester. Only about 4,500 abortions took place in the second trimester, terminations outlawed under the legislation moving forward.

Democrats have tried unsuccessfully to include exceptions for victims of rape, incest or human trafficking. The measures have drawn steady criticism in committees for potentially harming lower-income and minority women, or others without quick access to health care.

Sen. Kelli Stargel, R-Lakeland, a sponsor of the legislation, said she “believe(s) strongly that these are babies in women’s wombs and I want to protect them.

“With this bill, you’ve got 15 weeks. Most people recognize after their last period that they’re pregnant, maybe at the most, two to three weeks after that,” she added.

“Floridians should not have their data utilized by Big Tech without providing affirmative consent and I urge the Legislature to enact protections for the data privacy of all Floridians.” —DeSantis, State of the State

The governor has railed against Facebook and Twitter, which has kept Trump off its platforms for inciting violence.

And DeSantis last year pushed the Legislature to enact a measure aimed at regulating and potentially punishing these companies. That’s since been blocked by a federal court as a likely violation of free speech.

But data privacy efforts now in play in the Legislature focus on consumer protections – giving people the right to opt out of the sale of personal information or use of private data for targeted advertising.

While DeSantis endorses that goal, the House and Senate are clashing again over whether to give Floridians authority to sue companies that violate opt-outs and sell data without permission. House leaders support the lawsuit approach; while the Senate resists — echoing a deadlock that derailed privacy attempts last year.

All told, this could be one of the governor’s rare challenges with fellow Republicans. With last year’s social media attack facing an uphill fight in the court, data privacy legislation this spring could be DeSantis’ only chance to claim a victory over the Big Tech bogeyman he often warns about.

The budget and more

“We have 60 days to work together to build upon our rock of freedom. Lost time is never found again. Seize the moment.” —DeSantis, State of the State.

Florida lawmakers are scheduled to conclude the legislative session March 11. Still to be completed is a state budget expected to be over $100 billion, a congressional redistricting plan, and final action on scores of bills.

Among items still unresolved and watched by the governor: The fate of his proposed $1 billion gas tax cut, which he wants to launch in July and extend for five months, and his pitch to reestablish the Florida State Guard, a band of civilian volunteers to assist the National Guard in emergencies.