Abortion isn’t a dirty word in Florida, but DeSantis and the GOP act like it is 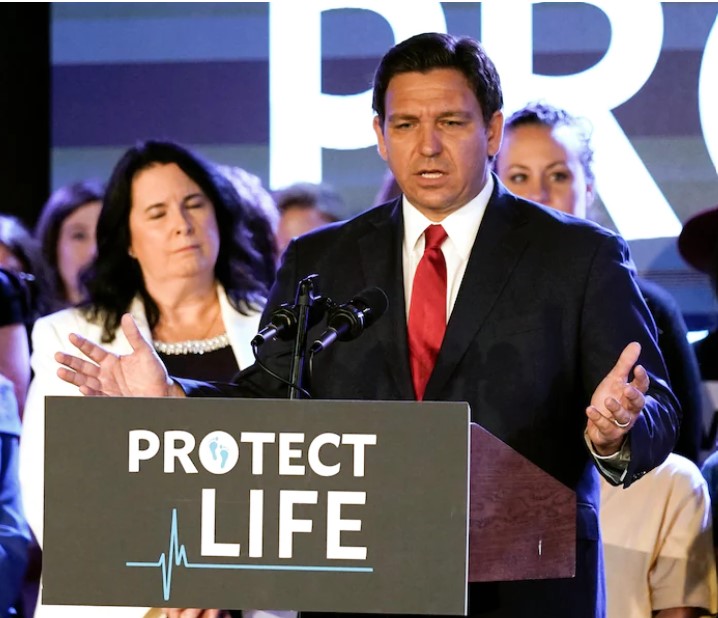 Abortion is not a dirty word in Florida. Most voters in the state support abortion rights. Florida has one of the highest abortion rates in the country. And clinics here serve as a haven for out-of-state women now barred from getting an abortion by their own state governments. Florida even boasts something unique — a constitutional right to privacy that protects abortion under a state Supreme Court ruling.

The Republican-dominated state legislature had already moved to limit abortion access even before the ruling, passing a bill banning the procedure after 15 weeks of pregnancy. The law took effect July 1, but a challenge to it for violating the state constitution has been appealed to the Florida Supreme Court.

What’s unclear is how far DeSantis and Florida’s GOP lawmakers would go to “expand pro-life protections” and force women to carry their pregnancies if the governor is rewarded with another term. Would they push for a near-ban? Cap it at six weeks? Bar the use of medication to end pregnancies? Arrest women or doctors who defy the law?

“Who knows?” Stephanie Fraim, the chief executive and president of Planned Parenthood of Southwest and Central Florida, told me. “I’m so far beyond predicting what Gov. DeSantis will do to curb our freedoms.”

Many pro-choice women in Florida are prepping for battle and setting out to prove that the Sunshine State is not Texas or Oklahoma or Alabama, where abortion is now virtually illegal. Aided by a surge in donations, the pro-choice coalition here is pushing back on a variety of fronts, from social media blitzes to voter registration.

At the same time, reproductive health organizations and Democratic lawmakers are busy strategizing how to best protect women’s rights. Their multi-pronged approach includes the possibility of a citizen-led ballot proposal to amend the state’s constitution to explicitly protect abortion rights, similar to one in Michigan that on Wednesday was blocked, at least temporarily, by a state board from appearing on the November ballot.

“Everything needs to be on the table to protect abortion access in Florida and in the country,” state Rep. Anna V. Eskamani, a rising Democratic star, told me. “We cannot leave any stone unturned.”

The judge, Jared Smith, had based his decision in part on the fact that the young woman, who under Florida law was forced to tell him why she wanted an abortion, claimed to have a B average but did not. (Smith’s decision was overturned on appeal.) His opponent, Nancy Jacobs, a lawyer who had run twice for judgeships and lost, won the seat, despite the difficulty of defeating sitting judges.

Hillsborough County Democratic Party chair Ione Townsend told the Tampa Bay Times that the race was the county’s most significant election outcome. “I think it means that abortion is on the ballot,” she said.

Booting DeSantis from the governor’s mansion is the top priority among pro-choice advocates — not an easy feat, considering his $130 million campaign war chest and strong appeal to Republican voters.

His Democratic opponent, Rep. Charlie Crist, has made abortion rights a cornerstone of his campaign. The same goes for Rep. Val Demings, in a tight race to unseat Republican Sen. Marco Rubio, who advocates severe abortion restrictions.

With DeSantis, at this point, appearing likely to be reelected and the conservative-dominated state Supreme Court unlikely to reject the 15-week abortion ban if it decides to hear the case, the idea of the citizen-led ballot proposal to enshrine abortion rights in the state constitution looks increasingly appealing.

Florida voters have taken the ballot route before to sidestep recalcitrant Republican lawmakers, raising the minimum wage and reclaiming voter rights for felons.

But the ballot amendment process has become excruciatingly difficult. Recent laws make it extremely expensive and complex to collect the necessary signatures on petitions (nearly 900,000 signatures are needed). To gain passage, the ballot proposals must reach at least 60 percent approval. Even if amendments pass, the legislature still tries to dismantle them.

The stakes on abortion are so high that the effort would be worth it. Outlawing abortion in Florida would essentially turn it into a forced-pregnancy state for millions of women. The closest state with reasonable access to the medical procedure is North Carolina — an 11-hour drive from Miami.