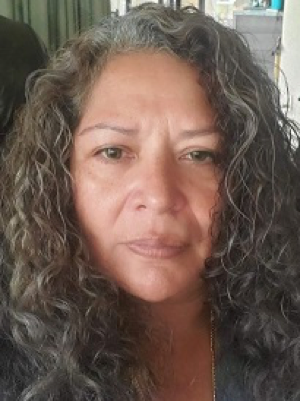 “As the unbelievable [election] results became undeniable—while living in the United States, my birth country—I located my passport and have carried it with me ever since. That’s how threatened I felt.”–Vielka Wambold

Vielka Wambold was born in San Antonio, Texas and, like many American military families, she was often afforded the opportunity of making new friends in new places. The family’s first move was to Panama, her father’s birthplace. As a green card holder, he was an active-duty instructor for the Inter-American Air Forces Academy (IAAF). Vielka says: “I was fortunate to spend most of my childhood in the Panama Canal Zone.”

Florida State University has a campus in Panama where Vielka completed a B.S. degree in two years, with a double major in Social Services and Criminology and a minor in Psychology. She supported herself working full time in the Civil Service. “My plan was to join the U.S. Air Force and see the world.” But after graduation, she decided to take a much-needed break to enjoy life before “seeing the world”. Somehow . . . she got sidetracked. She moved to San Antonio and decided to follow her second career choice, Civil Service. After six years, her career took her to Patrick AFB, Florida where she met her USAF husband, Gary. They have one son, Tristan. They spent 15 years in Colorado Springs, followed by stints in Italy and Germany. A promotion for Vielka took them back to Colorado Springs until her retirement in 2007.

“The year I retired Obama’s campaign was in high gear. A voter registration volunteer knocked on our door and the ensuing conversation about the campaign and issues sparked my interest. So I became a volunteer. It was fascinating to participate and see first-hand how the election process works and learn about the grassroots movement.”

After settling in Port Charlotte, she joined the Southwest Florida Indivisibles, a non-partisan group committed to increasing voter registration and participation by the disenfranchised—supporting Black Lives Matter, Civil Rights, LGBTQ, Women’s Right to Choice, and environmental causes, to name a few. Next, she volunteered with the Charlotte County Democrats (CCDems), where she discovered there had never been a Hispanic Caucus. The idea of a caucus was to focus on fostering a better and more representative government for the disenfranchised, encouraging Hispanic citizens to become candidates for public office and to support campaign efforts to elect Democratic Party nominees. Vielka believes: “Under this administration, it is a matter of life and death.”

In 2016, two events had a significant impact on Vielka—the election results and learning about family/child separations at the border. She revealed:  “As the unbelievable results became undeniable—while living in the United States, my birth country—I located my passport and have carried it with me ever since. That’s how threatened I felt.”

In 2018 she learned about Joshua Rubin, who started a Witness Movement. Josh has dedicated his life to witnessing the camps holding immigrant children who have been separated from their families. He has stood vigil at two camps, the Tornillo Facility in Texas and the Homestead Temporary facility in Florida. Vielka joined Josh and other Witnesses at the Homestead facility on more than one occasion. “The purpose of the vigil was to shine a light on the harm being done to these children by the Trump administration’s immigration policies.”

When asked what she would be doing if she were not working with the CCDems, without hesitation, Vielka said: “Marching with other activists, in any state capital or Washington, for Black Lives Matter and immigration rights, and showing up in D.C. to demand that legislators do their jobs! I would return to the border and work alongside those incredible groups helping the asylum seekers.”  She also dreams of someday returning to Panama where she and Gary would enjoy retirement living.

“But for now,” Vielka says, “there is so much to do. And we not only know what we have to do, we understand what is at stake. To my fellow Hispanics: We need your voice, your vote, and for you to show up. Complete the census and be ‘counted’ because we all matter. And Recuerda: Tu Votó Es Tu Voz! To voters who are not Democrats, I say to you: We will fight for your rights that are and will be infringed upon, too.”

We need you at the polls and we need you to volunteer! Please join Vielka by completing this application.