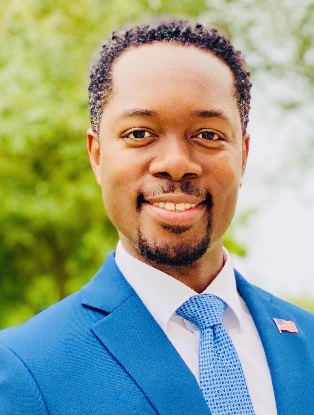 When Allen Ellison, our Democratic nominee for US House of Representatives, FL District 17, was a boy of eleven, his dad told him: “If you can play two songs on the piano by Christmas, I will buy you a go-kart.”  Allen won the bet, got the go-kart, and to this day is a mainstay piano player at churches around the state.

That Allen successfully took on his dad’s challenge tells you a lot about him.

So does hearing him talk about his ten-year-old daughter, Allanah. “She’s one of the reasons I ran for Congress,” Ellison says, as his eyes light up. “I know from the struggles my mom faced how hard it is for women, especially women of color.”  Allen’s mom was a teacher of people with disabilities helping them to live more independently. His dad was an auto mechanic and painter. Allen rebuilt his first car engine when he was ten. Later, he started playing around with cutting hair, realized he was good at it, and decided it was not a bad way to make a living.

“Working in the field of cosmetology for over 20 years has taught me a lot,” Ellison says. “It taught me how to listen, to connect, and to be open-minded and resourceful in helping people solve problems.”

After listening and learning about his community and issues faced by average people, he decided to go back to school focusing on political science and graduating from Florida Southern College in 2007.

In the fall of 2018 Allen was informed that April Freeman, who was running for the U.S. House of Representatives, had suddenly died.  He quickly assembled a campaign team and, despite having only a few weeks to prepare and with Ms. Freeman’s name still on the ballot, had a more than respectable showing, collecting over one-third of the votes in the district.

In 2020, Allen was the obvious choice to run as our Democrat for the U.S. District 17 seat and faced no serious opponents in the primary.

Allen lays out plainly what he sees at stake in the current election. “It is absolutely true that this is the most important election of our lifetime,” he says.  “We are living in the worst economic slump since the Great Depression. Our nation is suffering, divided, and dying.  We need leaders who will take action to solve the most pressing issues of our time as they speak with healing words and lead with a sense of unity.”

Allen’s website and Facebook page outline his approach to a number of issues faced in his district including jobs, the economy, healthcare, the environment, veterans, and seniors, to name just a few.

Allen speaks directly about the failures of our current U.S. District 17 congressman.  “It is shocking to me that Greg Steube voted ‘NO’ on the Coronavirus Relief Bill,” Ellison says.  The bill was written to provide relief to the millions of families out of work due to the closing of the economy and massive job losses.

Steube also voted ‘NO’ on The Heroes Act, which included some $1.13 trillion of emergency supplemental appropriations to federal agencies, as well as economic assistance to governments at the state, local, tribal, and territorial levels. Much of the funding would have supported nutritional assistance, help with utility payments, and job-training.  All key issues to low-income people in these difficult times.

Remarkably, Representative Steube was one of two Florida congressmen who opposed the legislation that would have provided hurricane relief to those in the panhandle.  Imagine how refreshing it would be to have a representative in Congress who cares about us and our issues rather than the issues of his wealthy donors?

“We need a new path forward,” Allen’s website proclaims. “My vision for our future is centered around improving the quality of life for all citizens by protecting our environment, securing social security, healthcare, the rights of women, veterans care, increasing disability benefits, and making improvements to infrastructure and our educational system. It means creating good-paying jobs, sustainable agricultural development, and green solutions for a stronger, cleaner, and safer environment.”

Beyond these great plans, what Allen brings to us is a trait we all crave in our leaders:  Decency

In a time when political rhetoric has become toxic, wouldn’t it be refreshing to have someone in Washington who quietly and compassionately considers all sides and then acts accordingly?

Charlotte County Democrats enthusiastically endorse Allen Ellison as our candidate for U.S. Congress. Donate website to his campaign and then vote Democratic up and down the ballot this year for the change we desperately need.