Amendment #6-Why Vote No? 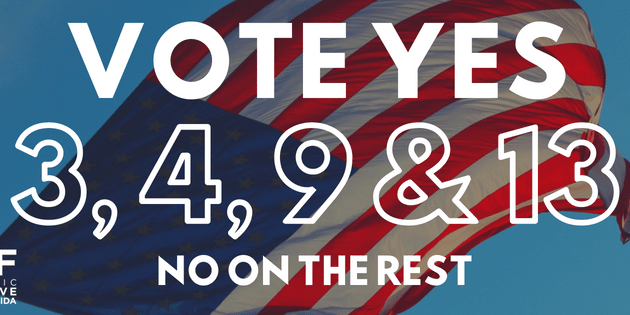 Have you noticed the yard signs and letters to the editor asking for you to vote “yes” on Amendment 6?

Amendment 6 is confusing because it contains three proposals: (1) to expand the rights of victims; (2) to raise the retirement age of judges from 70 to 75; (3) to force courts and judges to interpret laws and rules for themselves rather than rely on interpretations by government agencies. Raising the retirement age of judges to 75 will put Florida in line with most other states. But that is no reason to vote yes on this amendment.

As to victims’s rights, they are already enshrined in the Florida Constitution (Article I) and detailed in Florida Statute (Chapter 960). The Florida Democratic Party, the Florida League of Women Voters and the ACLU agree that this amendment would disrupt the balance between the rights of victims and the rights of the accused by deleting current constitutional protections for those accused of a crime. In fact this amendment would end up eroding the rights to due process.

Amendment 6 would overburden a court system that already has limited resources for protecting victims of violent crimes while broadening the definition of “victim” to include corporations and corporate entities.

Further, the American Legislative Exchange Council (ALEC) and those aligned with the Koch brothers would love for this amendment to pass. Why? It would prohibit the courts from deferring to administrative agency expertise in rule making cases. It’s hard not to believe that this is an effort by the Republicans to limit the power of a Democratic governor to use administrative agencies to protect Floridians from corporate abuse.

For these reasons, we must defeat Amendment 6!

A dark money mystery in Florida; a spoiler candidate helps a Republican win by 32 votes
November 28, 2020