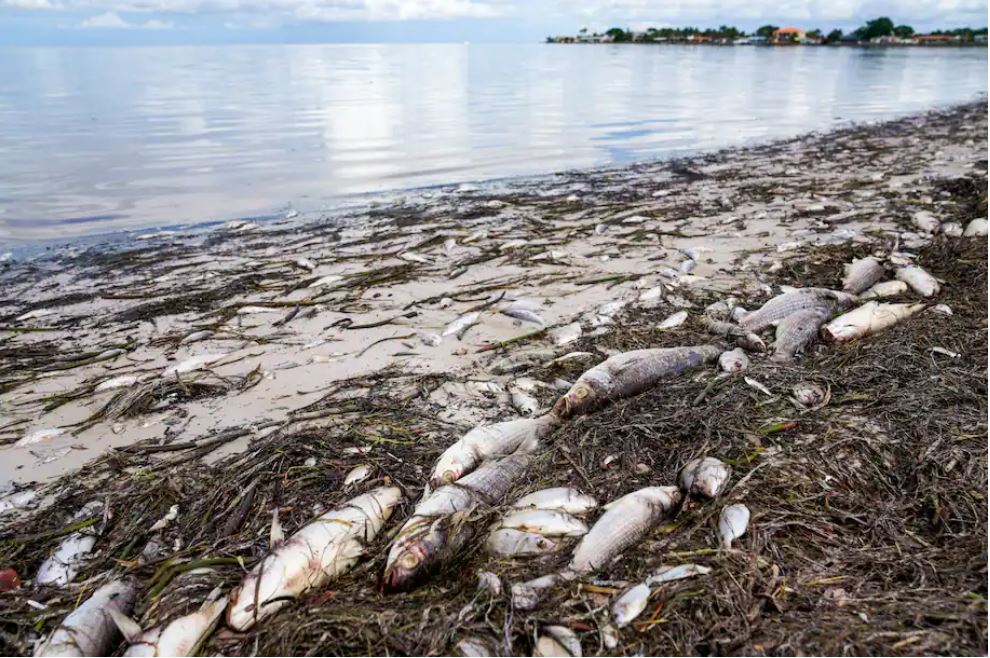 When Glen Nguyen drove his boat out onto Tampa Bay on Sunday afternoon, he did not bother bringing his fishing rod. The 38-year-old St. Petersburg, Fla., native had cast lines into the bay since he was a child, but this weekend, all he could see was tragedy, “endless death.”

“Never, ever, have I seen it this bad,” Nguyen, who fishes both in tournaments and commercially, told The Washington Post.

The dead fish have been washing up on the shores of Tampa Bay in West Central Florida since at least early June, thanks to a natural phenomenon known as “red tide” — large “blooms” of toxic algae that spread through the water. They can harm sea creatures and even humans.

Since Tropical Storm Elsa swept Florida last week, the problem has become worse, as strong winds pushed scores of lifeless fish onto the shores of St. Petersburg, surrounding residents and visitors in a miasma of rotting death.

On Friday, St. Petersburg cleaning crews had collected 15 tons of dead fish after 10 days of cleaning up, officials said during a news conference, as the cleanup continued. “Nine tons of those fish have actually been picked up in the last 24 hours,” St. Petersburg Emergency Manager Amber Boulding said at the news conference.

“That push of water from the winds of Elsa seems to have definitely pushed in more of those fish kills,” she said.

Even after the 15 tons had been cleaned up, the fish were still everywhere — out in the water, on the shores, in the mangroves, Boulding said. On Saturday in Vinoy Park, which overlooks the bay, thousands of dead tarpon and snook, both shiny scaled fish, lined the sea wall and were scattered in the water, the Tampa Bay Times reported.

St. Petersburg is the epicenter of the state’s recent red tide, the paper reported. The National Weather Service on Saturday evening issued a beach-hazards warning for the southern areas of Pinellas County, where St. Petersburg is located. Exposure to a red tide bloom can cause coughing and eye, nose, and throat irritation in humans, according to the Florida Department of Public Health.

Red tides, formally known as “harmful algal blooms,” “occur when colonies of algae — simple plants that live in the sea and freshwater — grow out of control while producing toxic or harmful effects on people, fish, shellfish, marine mammals, and birds,” according to the National Oceanic and Atmospheric Administration.

Specifically, it is a microscopic organism called Karenia brevis that is responsible for Florida’s red tide. In 2018, a long-lasting K. brevis red tide afflicted residents of the nearby Sarasota County, causing sharp drops in tourism and hitting its economy hard, The Washington Post reported.

Like this month’s red tide, the 2018 event brought a lot of death. At least 19 dolphins and 239 sea turtles in Sarasota and Manatee counties died, and about 2,000 tons of dead marine life were recovered from five counties hit by the red tide, The Post reported. Statewide, 100 manatees died.

“We think back to our last red tide bloom in 2018 and how serious it was. And talking to the staff here, this is worse,” Boulding said. “They’re seeing … more fish kills coming in. We go up and take aerial footage, we still see more out there in the bay.”

“It’s frustrating for residents … because we don’t know the end of it,” she added.

It is unclear why this red tide is so severe, but some suspect it might have been exacerbated when 215 million gallons of nitrogen-rich wastewater made its way into the bay earlier this year from the site of an old fertilizer plant, the Tampa Bay Times reported. The algae feed on phosphorus and nitrogen.

Regardless of the cause, Nguyen knows one thing: The water he and his father once traversed in search of redfish is unrecognizable. The damage was such that he fears the ecosystem may not heal.

“It’s going to affect us in ways we haven’t seen yet,” he said.