Another Sarasota link to those fighting 2020 election results 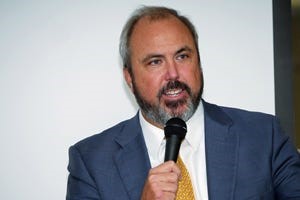 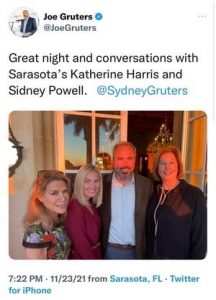 The Sarasota region’s connections to those fighting the 2020 election results keep growing, the latest example being a visit from former President Donald Trump lawyer Sidney Powell.

Sarasota state Sen. Joe Gruters met with Powell and former Sarasota Congresswoman Katherine Harris on the Tuesday before Thanksgiving. They had a private dinner at a Sarasota residence. Gruters tweeted a picture of himself with Powell and Harris, but later deleted it.

Powell became famous for pushing a series of unfounded election fraud claims. While her election lawsuits have been unsuccessful, she continues to press the issue, and spoke with Gruters about her concerns.

“We talked about election integrity issues and other issues that are happening on a national level,” Gruters said. “We had some interesting topics come up. I’m always trying to understand the issues that are out there.”

Gruters, who also chairs the Florida GOP and the Republican National Committee’s Election Integrity Committee, said he has a long relationship with Harris, who also was at the center of a big election controversy as Florida’s secretary of state during the 2000 presidential recount. The dinner was the first time Gruters met Powell.

“When I sat down with her she’s making some very valid points,” Gruters said. “The most important thing we have in our democracy is to make sure we have safe and secure and valid elections.”

Gruters declined to go into specifics about what Powell said.

“I’ll just say she made some good points. She went over a bunch of stuff,” Gruters said.

Asked if he believes the election was stolen, Gruters said: “There’s a lot of questions still outstanding.”

Powell’s unfounded claims have generated legal problems for her. She is being sued by Dominion Voting Systems for defamation, and this week a federal judge ordered Powell and other lawyers who filed an unsuccessful election lawsuit in Michigan to pay the legal fees incurred by the state and the city of Detroit.

Powell’s visit comes as the Sarasota region has turned into a hub for those challenging the 2020 election. Michael Flynn, Trump’s former national security adviser, has a house in Englewood and former Overstock.com CEO Patrick Byrne also owns property in Sarasota County.

Both Flynn and Byrne have been heavily involved in efforts to cast doubt on the election results.

Meanwhile, Sarasota company Cyber Ninjas was hired to audit election results in Arizona’s most populous county. The audit was initiated by those questioning Trump’s loss in the state.

Florida Gov. Ron DeSantis is pushing more election law changes in the upcoming legislative session, something that Gruters will be involved in.

“Florida has been doing things right for a long time and I think we’ll continue to tighten the screws here,” Gruters said.