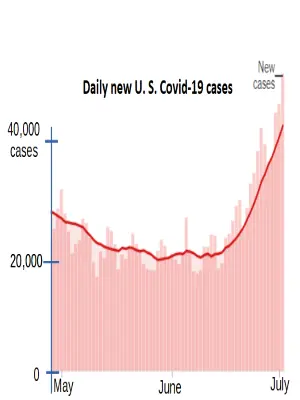 Americans, at least those who believe in science, love Dr. Anthony Fauci. He has become a folk hero in the war against Covid-19 and serves as a beacon of scientific truth against a backdrop of silence, secrecy, and lies promoted by the Trump administration. For payback, the Trump administration often kept Dr. Fauci’s chair empty during the daily Coronavirus Task Force briefings.

When the briefings ceased, science was replaced with President Trump stepping in and pathetically suggesting an infusion of bleach into our veins might kill the virus (and perhaps turn our lovely blue veins lily-white?). At that point, we knew we were on our own to secure scientific information regarding the pandemic’s spread within our borders.

Either directly or indirectly through his influence as president, Donald Trump and his misinformed disciples are systematically destroying our public health system. Not since its inception in 1906 has this safety net for American health been so maligned, attacked, and misunderstood by some of the very people benefiting from public health initiatives.

Ignorance, ego, and lies have fueled the virus spread and destroyed trust in the top levels of government.

Trump is truly not the leader of this country; he is, however, the leader of his base. His behavior implicitly offers permission for the verbal and physical harassment of hard-working public health professionals prescribing uncomfortable but scientifically valid practices to save lives and lead us through this pandemic. These scientists are tired, they are scared and they are leaving.

As Dr. Fauci disappeared from the Trump stage, so have other respected public health professionals left their leadership positions.

The backlash toward health officials has taken its toll: At least 24 public health officials across the country have either resigned, retired or been fired from their positions during the Covid-19 pandemic, the National Association of City and County Health Officials (NACCHO) reported Monday.

“What has typically been just pure public health advice coming from a trusted source in the community, the local health department is systematically being politicized and made to seem like the public health advice is something that is restricting people’s rights and their freedoms to move about,” maintained Lori Freeman, CEO of NACCHO (National Association of County and City Health Officials).

We witness this demonization daily. During a live public briefing on Facebook last month, “someone very casually suggested the Los Angeles County’s public health director should be shot.” Director Barbara Ferrer has been receiving threats since March.

KathleenToomey, Commissioner of the Georgia Department of Public Health, confirmed threats by email and phone beginning more than a month ago. At one point, she reported her state office received six to ten hostile messages a day.

Dr. Amy Acton, director of the Ohio state health department, has also become a lightning rod of criticism from opponents claiming she overestimated the deadliness of the Coronavirus and overreached her authority in ordering closures. Republican lawmakers tried to strip her of her power and protesters demonstrated outside her home. She resigned June 11th.

California is currently tracking over 20 resignations, firings, and unusual retirements that really would never happen in the course of a pandemic with a normal health official, typically because they’re so needed in the community. Dr. Ferrer, Los Angeles health director, concedes it’s been “extraordinarily hard to work under conditions where people are so angry with you, take it so personally that they threaten your well -being and the well-being of people around you.”

This is not only a national travesty. In our own state of Florida, we have commiserated with Rebeka Jones, a well respected public health epidemiologist fired for her refusal to “cook the books” of reported Covid-19 data appearing on the state dashboard. But revenge is sweet! She now maintains her own dashboard of truth providing daily virus updates devoid of manipulated facts intended to make us believe things are not so bad.

America needs to be alarmed. This is a wake-up call. The war on truth is affecting our protective health infrastructure and everyone under its umbrella of safety. Unless we vote Trump and his mute supporters at the highest levels of government, including our own District 17 US Representative Greg Steube, out of office on November 3rd the very concept of public health may fade away like an aging photograph reminding us of better times from the past. Vote Blue!