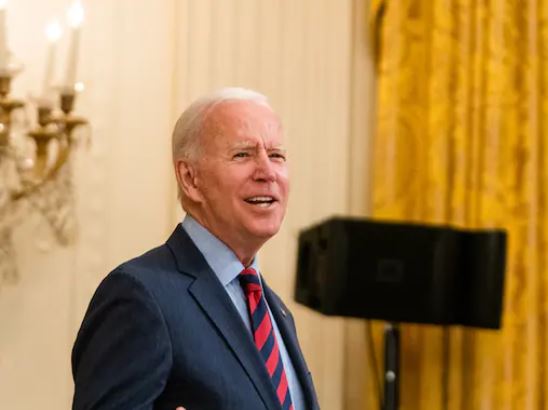 President Biden on Tuesday denounced Republican officials who have blocked efforts to mandate vaccines, as he encouraged cities and states to require that individuals show proof of vaccination to visit restaurants and other public spaces.

In a notable toughening of his message, the president called out Republican governors who have banned businesses and universities from requiring vaccines or defied masking guidance from the Centers for Disease Control and Prevention.

“I say to these governors: Please help. But if you aren’t going to help, at least get out of the way,” Biden said. “The people are trying to do the right thing. Use your power to save lives.”

When asked specifically about Republican Govs. Ron DeSantis of Florida and Greg Abbott of Texas, Biden said that “their decisions are not good for their constituents.” DeSantis signed an executive order last week that prohibits schools from requiring masks, and Abbott signed an order that bans local governments and state agencies from mandating vaccines.

Until now, Biden has largely sought to avoid statements that could exacerbate the partisan cast of the vaccine debate and has gone out of his way to praise Republicans who are promoting vaccinations. But the White House has grown increasingly frustrated with leaders who are actively seeking to block efforts to encourage or require vaccinations.

Both governors have questioned the effectiveness of mandates.

Before Biden spoke Tuesday, DeSantis blamed media “hysteria” for making conditions in Florida seem worse than they are.

Renae Eze, a spokeswoman for Abbott, said in a statement: “Governor Abbott has been clear that we must rely on personal responsibility, not government mandates. Every Texan has a right to choose for themselves and their children whether they will wear masks, open their businesses, or get vaccinated.”

In remarks from the East Room of the White House, Biden also pleaded again with Americans to get vaccinated, warning against the dangers of the delta variant. Cases of the virus have skyrocketed in recent weeks, particularly in communities where vaccination rates remain low.

New daily cases have risen 52 percent over the past week, according to The Washington Post coronavirus tracker. Still, hospitalizations and deaths have lagged, which Biden noted was because the vaccines are effective in reducing the likelihood of severe illness or death.

“If you’re unvaccinated, you are much more likely to, one, get Covid-19; two, get hospitalized; and, three, die if you get it,” Biden said. “This is a tragedy. People are dying and will die who don’t have to die.”

The resurgence of the virus has also caused an uptick in overall vaccinations, with the president finally meeting his goal of having at least 70 percent of adult Americans get at least one dose of a vaccine. Biden had aimed to meet that goal by the Fourth of July, but it took until Monday.

Still, infections are tearing through parts of the country and local health officials are warning that hospitals are reaching capacity, largely because of unvaccinated young and middle-aged adults. As a result, some cities and states have taken more-aggressive steps to encourage vaccinations, as they look to balance public health with businesses’ ability to operate and keep the economy open.

At the end of the month, the White House said, it would begin to ship the first batch of the half-billion Pfizer-BioNTech doses it has pledged. The doses are largely being distributed through Covax, a World Health Organization-backed initiative to distribute vaccine doses to poorer countries.

The White House had been eager to shift the focus beyond the pandemic and put more emphasis on the president’s efforts to enact an infrastructure package and a social spending bill. But the highly transmissible delta variant, along with the refusal of so many Americans to get vaccinated, has forced Washington to refocus on the coronavirus.

The latest example came Tuesday when the CDC announced a new federal moratorium on evictions after intense pressure from liberal Democrats over the expiration of the previous moratorium. Led by Rep. Cori Bush (D-Mo.), some Democrats had camped outside the Capitol and rebuked the White House for not doing more to protect millions of renters.

Biden previewed the order after his speech Tuesday, but he acknowledged that the move was likely to face a court challenge and said scholars he consulted thought the measure was probably not constitutional.

Biden’s message Tuesday reflected a tone and approach that has become steadily tougher as it has become clear that a significant percentage of Americans are refusing to get vaccinated not because they are hesitant or fearful, but because they have a firm ideological objection to the shots and in many cases embrace conspiracy theories about them.

Last Thursday, the president announced that he was requiring all federal workers to get vaccines, or else they would have to wear masks at work and take regular coronavirus tests. The goal in part was to persuade other employers, public and private, to follow suit, in hopes of covering millions of Americans.

That new policy came as the White House grew increasingly worried about the delta variant raging through the country at the same time that vaccination rates are stalling, a development that could threaten the country’s economic and social reopening.

“You want to know how we put this virus behind us? I’ll tell you how,” an evidently exasperated Biden said in announcing the move last week. “We need to get more people vaccinated.”

But the path has not been easy. Thursday’s announcement drew immediate opposition, including from unions that Biden has long considered allies but that resist the idea that their members would be required to get vaccines.

A growing number of political and business leaders have sought in recent days to meet the continued resistance with more-forceful tactics, concerned that if vaccination rates do not increase, infections could surge even higher in the fall.

The president now regularly decries the “pandemic of the unvaccinated,” stressing that those who have been inoculated rarely get infections and that when they do, their symptoms are almost invariably mild. The nation’s current deaths are especially tragic because they are avoidable, Biden suggested Tuesday.

The need for broad vaccine mandates was dismissed by many at first because public health officials assumed they wouldn’t be necessary once the shots were widely available. But with up to 30 percent of American adults forgoing a vaccine, that viewpoint has changed for many officials.