Biden’s $6 trillion budget aims to grow the middle class, financed by the rich 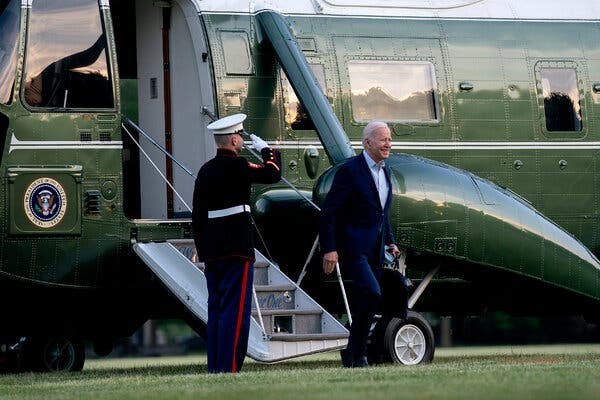 WASHINGTON — President Biden’s $6 trillion budget bets on the power of government to propel workers, families and businesses to new heights of prosperity in a rapidly changing economy, by redistributing income and wealth from high earners and corporations to grow the middle class.

The inaugural budget request of Mr. Biden’s presidency reduces spending levels compared to last year, when lawmakers dispensed trillions of dollars to people, businesses and local governments to help them survive the pandemic recession. But it sets the nation on a new and higher spending path, with total federal outlays rising to $8.2 trillion by 2031 and deficits running above $1.3 trillion throughout the next decade.

That spending represents an attempt to expand the size and scope of federal engagement in Americans’ daily lives, including guaranteeing two years of prekindergarten and two years of free community college, reducing the costs of child care, granting paid leave for workers, sending monthly government payments to parents and paving the way for electric cars and trucks to take over the nation’s highways and cul-de-sacs.

Mr. Biden would borrow trillions over the next decade to fund those programs, swelling the national debt to a record size as a share of the economy, in hopes of putting the country on more solid fiscal footing for decades to come.

“The budget is built around a fundamental understanding of how our economy works and why, for too long and for too many, it has not,” Mr. Biden wrote in an introductory message. “It is a budget that reflects the fact that trickle-down economics has never worked, and that the best way to grow our economy is not from the top down, but from the bottom up and the middle out.”

To nudge that process along, Mr. Biden unveiled $3.6 trillion in tax increases on wealthy Americans and big corporations, a move Republicans warn would cripple American companies’ ability to compete globally and make it harder for them to tap into growing consumer markets abroad.

Administration officials argue that the tax increases would help rebalance the economy to the benefit of businesses and their employees alike. They say workers would be more productive, earning and spending more money, and that government investments in infrastructure and research and development would better position American companies in a global competition with China and others to dominate emerging high-tech industries like advanced battery production.

Democrats who have long pushed for higher spending on social programs financed by tax increases on the rich welcomed the budget as a sign of validation. Speaker Nancy Pelosi of California called it “an unequivocal declaration of the value that Democrats place on America’s workers and middle-class families.”

Republicans slammed Mr. Biden for wanting to spend too much overall and not enough on national defense: The budget’s proposed increases in military spending of 1.6 percent per year over a decade are lower than its forecast rate of inflation.

“President Biden submitted the details of a budget that promises higher taxes, higher prices, crushing debt and less security,” Representative Kevin McCarthy of California, the House Republican leader, said. “It is the most reckless and irresponsible budget proposal in my lifetime.”

The White House disagrees and sees the budget as both a collection of Mr. Biden’s ambitious economic proposals from his first months in the White House and a repudiation of former President Donald J. Trump’s policies. The budgets put forth by the previous administration pushed tax cuts, future spending reductions and unfulfilled promises of sustained, accelerated economic growth, while Mr. Biden’s inaugural budget envisions an era of federal taxation and spending previously unseen in the United States outside of periods of war or pandemic.

Mr. Trump sought to trim more than $1 trillion in federal spending on Medicaid and Obamacare, and rein in spending on Medicare. In contrast, Mr. Biden’s budget proposes an additional half-trillion in spending for home health workers and federal subsidies for low- and middle-income Americans to buy health insurance. Mr. Biden would spend more than $2 trillion more on domestic discretionary programs, like research and education, than Mr. Trump proposed in his final budget in office.

And while Mr. Trump sought to pull back from government action on climate change, Mr. Biden proposes about $1 trillion on climate-related initiatives, including infrastructure improvements meant to accelerate the nation’s transition to an economy powered less by fossil fuels and more by lower-emission energy sources.

Mr. Biden also seeks to expand the government safety net in an effort to help Americans — particularly women of all races and men of color — work and earn more, rather than relying on corporate America to funnel higher wages to workers.

The budget reflects “the pathways to the middle class,” along with investments in those families already there, the acting director of the White House budget office, Shalanda Young, told reporters.

Some of the spending increases Mr. Biden forecasts reflect the growing strains of an aging population on social welfare programs. As more baby boomers retire over the next decade, the budget projects Medicare spending to double and Social Security spending to rise by 75 percent.

In other areas, Mr. Biden is pushing what amounts to a permanent increase in the size of the federal footprint on the U.S. economy. Since 1980, annual federal spending has been, on average, about one-fifth the size of the nation’s economic output; under Mr. Biden’s plans, that would grow to close to one-fourth. The federal work force would also grow: The American Federation of Government Employees thanked the president on Friday for proposing “substantial staffing increases to multiple agencies.”

That growth would be funded by businesses, high earners and federal borrowing.

The budget projects an additional $14.5 trillion would be added to the national debt over the course of the next decade. It also projects a doubling of the amount of tax revenue collected from corporations by 2025, compared with 2020, the year before Mr. Biden took office. But it would take more than a decade for tax revenues to fully cover the costs of Mr. Biden’s agenda.

Corporate tax increases would raise $2 trillion over a decade, with nearly half of that revenue coming from higher taxes on money that multinational companies like Microsoft, Procter & Gamble and General Motors earn outside the United States.

Tax increases on high earners — those making above $400,000 per year — would raise another $750 billion over the decade. That includes raising the top marginal income tax rate to 39.6 percent from 37 percent for married couples making just over $500,000 a year and individuals making just over $450,000. The proposal also estimates a near-doubling of capital gains tax rates for people earning more than $1 million a year. Revenue from those tax increases would begin reducing deficits by the end of the decade.

Yet while Mr. Biden has pledged not to raise taxes on people earning less than $400,000 a year, the budget assumes that tax cuts passed by Republicans in 2017 would expire as scheduled at the end of 2025, which would raise taxes on most Americans. On Friday, administration officials said the president would work with Congress before 2025 to ensure people earning less than $400,000 would not face a tax increase.

It was one of several areas in which Mr. Biden’s team chose not to apply traditional budget estimates to his administration’s policy initiatives.

In its budget summary, the White House signaled a commitment to a range of major health care proposals, including the creation of a public option health insurance plan; an effort to reduce prescription drug costs; a plan to lower the age of eligibility for Medicare; and an expansion of Medicare benefits, to add vision, hearing and dental coverage. But the administration declined to calculate the costs of those policy changes.

Officials also did not estimate costs for an overhaul of the unemployment insurance program that Mr. Biden asked Congress to undertake this year.

Those omissions contributed to the mixed reviews Mr. Biden earned from Washington groups that push for fiscal balance and a reduction in the national debt.

“We are encouraged that the president continues to offer concrete proposals to pay for his legislative agenda over time, and we strongly support the administration’s insistence on offsetting new spending,” said Maya MacGuineas, president of the Committee for a Responsible Federal Budget. “Yet the president’s budget takes too long to pay for his initiatives and does little to address our high and rising debt, lower health care costs or secure major trust funds headed toward insolvency.”

Congress will decide how much, if any, of Mr. Biden’s proposals to write into law. The president has a narrow window of opportunity to push them through. Democrats control the House and the Senate by slim margins. Republicans have balked at Mr. Biden’s plans to raise taxes on high earners and corporations and at much of his spending agenda, though some Senate Republicans are negotiating with the president over a potential deal to invest in physical infrastructure, like roads and bridges.

Republicans are incredibly unlikely to support Mr. Biden’s tax increases and the White House’s push will not be helped by the modest economic benefits that his budget estimates his policies will produce.

Mr. Biden’s aides anticipate the economy will grow by 5.2 percent this year, slowing to less than 2 percent growth by the end of the decade. But they stressed on Friday that those forecasts, which were completed in February, did not account for all of the plans Mr. Biden has since proposed. They said they expected that the policies Mr. Biden had set forth in the budget would do even more to grow the economy.

“When we did the forecast in early February,” said Cecilia Rouse, who leads the White House’s Council of Economic Advisers, “the world looked much different than it does today.”

While Mr. Biden tries to court Republicans, Democratic leaders are simultaneously preparing for a possible effort to advance much of Mr. Biden’s agenda through Congress without any Republican support via the budget reconciliation process, which bypasses the 60-vote filibuster threshold in the Senate.

Senator Bernie Sanders, independent of Vermont and the chairman of the budget committee, said he planned to hold a hearing on the budget and work “to write and to pass a reconciliation package that builds upon President Biden’s proposal as soon as possible.”

Jim Tankersley is a White House correspondent with a focus on economic policy. He has written for more than a decade in Washington about the decline of opportunity for American workers and is the author of “The Riches of This Land: The Untold, True Story of America’s Middle Class.” @jimtankersley