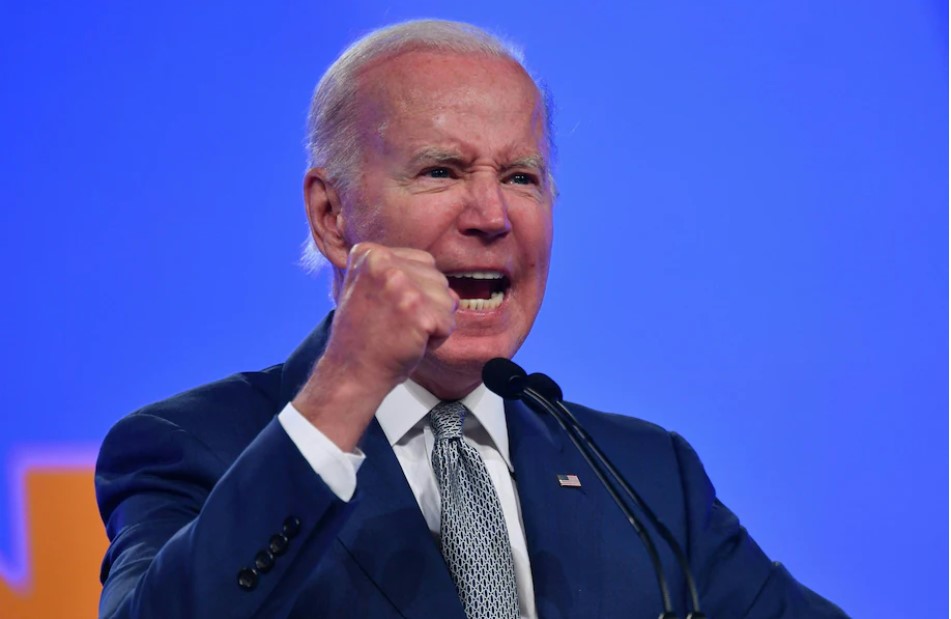 President Biden and his White House staff have received a lot of criticism lately, much of it from Democrats nervous that his message isn’t breaking through or that he isn’t hard enough on Republicans. Biden must have heard the complaints.

At a rousing speech before the AFL-CIO in Philadelphia on Tuesday, he sounded like he used to as vice president and on the campaign trail when he inhabited the persona of “Joe from Scranton.” His delivery was punchier and at times angrier than usual. He mocked and knocked Republicans’ plutocratic economics. And he made a stronger-than-usual case that Republicans are blocking economic progress. He was rewarded with multiple ovations.

Biden took his time reminding the audience what a mess the country was when he took office, including Americans “waiting in line for an hour for a box of food.” “That’s what we inherited,” he said. His argument boiled down to an effective message: Look how much better off we are, even if there’s more room for improvement.

He regaled the crowd with the gains to date: more than 8 million jobs created, including more manufacturing jobs; a significant reduction in daily covid deaths; the opening of “shuttered” schools and businesses; and increased personal savings. He featured the infrastructure plan that will create millions of new union jobs. “Now not only is it infrastructure week; we’ve arrived at infrastructure decade,” he declared.

While acknowledging inflation is “sapping the strength of a lot of families,” Biden insisted he is doing all he can to lower costs for families. He then quickly pivoted to put the blame on Russian President Vladimir Putin for rising gas prices, which he noted are up $1.74 since the war in Ukraine began. He also called out Republicans for “doing everything they can to stop my plans to bring down costs on ordinary families.”

Is he shifting blame away from economists, including his own advisers and those at the Federal Reserve, who believed that inflation was “transitory”? Sure, but he’s not arguing that Republicans caused inflation; he’s saying they are standing in the way of measures to tamp down costs for families — a fair point and a solid political argument.

Biden highlighted the Democrats’ plan to cap insulin at $35 per month. Republicans opposed that limit. Biden recalled his plans to help working-class voters with tax credits for kids, child-care subsidies and credits for energy-saving measures. Republicans don’t want any of those, either. (Neither does Democratic Sen. Joe Manchin III of West Virginia.)

Biden strenuously argued that voters should be wary of what Republicans are pushing. “Republicans have it all backwards: Their plan literally calls for increasing taxes on middle-class and working people and cutting taxes on corporations and wealthy Americans,” Biden said, referring to the infamous midterm agenda drafted by Florida Sen. Rick Scott. “I believe in bipartisanship, but I have no illusions about this Republican Party, the MAGA party.”

Biden is at his best when he’s going after Republicans who stand on the side of corporations and the rich. “They still refuse to consider changing any part of the Trump tax cuts — which delivered massive windfalls to billionaires and others, and they weren’t paid for,” he told the crowd. “They still refuse to consider a minimum corporate tax of 15 percent. … They seem to think that the problem in America today is that working families aren’t paying enough.”

He also took issue with a point in Scott’s plan that would “sunset” all federal legislation after five years. “Really, ask yourself, how are you going to sleep at night knowing every five years, Ted Cruz and the other ultra-MAGA Republicans are gonna vote on whether you’ll have Social Security, Medicare or Medicaid?” he argued.

Finally, Biden returned to the Affordable Care Act, pointing out that Sen. Ron Johnson (R-Wis.) is still running on repealing it. As Biden said, that would mean taking away protections for millions of people with preexisting conditions.

In short, Biden argued more convincingly than usual that “we’ve made extraordinary progress by laying a new foundation for our economy,” but that Republicans, if given the majority, would only make matters worse.

It’s no wonder Biden seemed more at ease. He has embraced that message for his entire career. Not coincidentally, the contrast between Democrats as the party of the “little” guy and Republicans as the party of corporations and the super rich has generally worked for Democrats.

“America still has a choice to make — a choice between a government by the few, for the few, or a government for all of us,” he declared. “Democracy for all of us, an economy where all of us have a fair shot and a chance to earn our place in the economy.” That argument might be the best shot Biden has to prevent a Democratic drubbing in November.