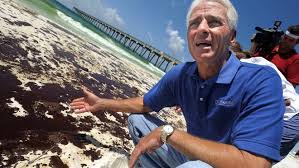 Port Charlotte, FL – On July 12th, US Representative Charlie Crist addressed 25 Charlotte County Democratic Party donors in a special meet and greet meeting via Zoom. He  is an American lawyer and politician serving as the U.S. Representative from Florida’s 13th congressional district, based in St. Petersburg, since 2017. He previously served as the 44th governor of Florida from 2007 to 2011. In May 2021, he announced that he is a Democratic candidate for Florida’s governor’s seat in 2022.

Our second gubernatorial candidate, Commissioner of Agriculture Nikki Fried, has confirmed she will meet with Charlotte Dems on October 9, 2021 at our next fundraiser. The Charlotte County Democratic Party will not endorse any candidate until after the primary election takes place on August 23, 2022.  Charlie Crist expressed confidence that the Democratic candidate who wins the primary can win the election, reminding us that Andrew Gillum lost to Ron DeSantis by just 0.4% in 2018.

He expressed that both he and Nikki Fried are both strong candidates, but that he has more experience. He feels he can work with the Republican-controlled legislature by listening to them, developing compromise positions, such as common ground on the needs to improve infrastructure and protect our environment. If all else fails, he will wield his veto pen.

In this meeting he explained his position on a wide range of topics. He is most concerned about recent legislation intended to restrict our voting rights. He is in favor of legalizing marijuana, increasing public education funding, preserving women’s rights to make their own decisions on their body, and protecting our fragile environment.  He is opposed to offshore oil drilling, as well efforts to drill for oil in the Everglades. He expressed strong concern for our wildlife, as manatees die due to loss of their seagrass habitat. He is in favor of restoring voting rights to former felons, which Floridians had approved by Constitutional amendment in 2018, but that will of the voters has been thwarted by our Republican-controlled legislature in 2020.

He answered numerous questions from the meeting participants.  In light of the horrific collapse of the Surfside condo complex, he endorses a proposal to require Condo boards to conduct inspections and be required to create reports on their reserve accounts and needed expenditures. He acknowledged that the Piney Point environmental spill is another wake call to us all – protect our environment before it’s too late.   He believes in home rule and is shocked how Tallahassee has stolen it away, since this had long been a Republican talking point.

He responded to a question concerning his allegiance to the Democratic Party, since he changed from the Republican Party in 2012.  He reminded us that he had hugged Obama in Fort Myers when he was still the Republican governor. He had been a Republican because his parents had been Republican; but he no longer could remain in that party as it drifted further and further right. He endorsed President Obama in 2012 and spoke at the Democratic National Convention.  He wrote a book about this experience. 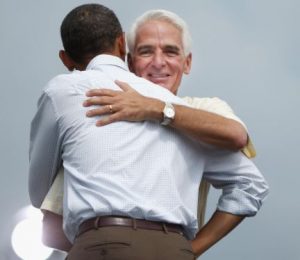 He wants to tap into public anger against the incumbent governor who encouraged and  signed outrageous anti-voting, anti-protest, anti-gay, anti-free speech bills in this 2021 legislative session, while he grooms himself as a Trump acolyte for a run at the 2024 US presidential election.  His eye is off the ball, pandering to a minority.  We must engage and educate Democrats, moderate Republicans and No Party Affiliation (NPA) voters to our values and positions. He has faith in Floridians to make the right choice in the voting booth on Tuesday, November 8, 2022.

Charlotte County Democrats ask for your financial support, which will be used for the development of voter guides, community activism, and voter education in preparation for the critical 2022 election.  Please donate here.

We seek local candidates for public office in the 2022 election. Please visit https://www.charlottedems.com/voting-matters/upforelection/ to see the many seats that are available.  Please contact vice-chair Larry Kuranowicz at [email protected] to learn more.