Emma González joined a dozen student leaders on the steps of the state Capitol Monday with a message to young voters: “Tomorrow is your chance to be a hero for yourself.” The students have been traveling the country on a nine-month voter registration effort — the Vote for Our Lives tour. (Read more in TampaBay.com)

Nine months after 17 classmates and teachers were gunned down at their Florida school, Parkland students are finally facing the moment they’ve been leading up to with marches, school walkouts and voter-registration events throughout the country: their first Election Day. (Read more in PBS.org) 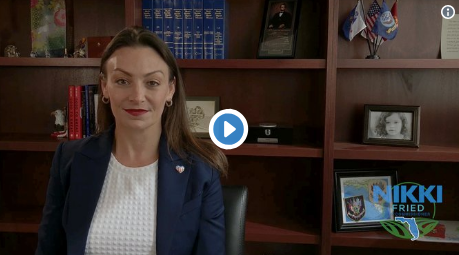 Nikki Fried to NRA: ‘I won’t be beholden to you’

Nikki Fried, the Democratic candidate for the state’s Commissioner of Agriculture and Consumer Services, sent a clear message to the National Rifle Association Monday morning: “I won’t be beholden to you.”

The message comes in the form of a signed letter to NRA lobbyist Marion Hammer. Fried says the letter was prompted by a Tampa Bay Times report that unveiled emails exchanged between Hammer and officials within the agriculture commissioner’s office.

On the Fourth of July 2016, National Rifle Association lobbyist Marion Hammer fired off an email to the Florida Department of Agriculture and Consumer Services. “This crap needs to stop,” begins Hammer in the first of seven emails she would exchange with the department over the next 48 hours. “You need to figure out how…

Another mass shooting happened in Florida. This time at a football video game tournament in Jacksonville.  Three people are dead including the 24-year old shooter, David Katz; 11 others are injured. After every mass shooting comes the hope that maybe this time will be different. Maybe this will be what gets the attention of Congress…

Joe Henderson: A warning to the GOP: Parkland isn’t going away

The Parkland kids and their determination to change the culture in Florida is the biggest X-factor in the primaries this month and in the November general election. That much has become increasingly evident as the campaigns have wound their ways toward the citizens’ right to determine what kind of state we want to be. Parkland’s…

Florida’s “Stand Your Ground” self-defense laws are a clear division point between the two Democrats and two Republicans in the state attorney general’s race, and that division showed in responses to questions Monday about the Markeis McGlockton shooting. (Read more in TampaBay.com) FDP Statement on Stand Your Ground Law Being Used in Clearwater Case Posted July…

PUNTA GORDA – More than two dozen protesters held a “die-in” on the steps of the Historical Charlotte County Courthouse Tuesday to mark the second anniversary of the Pulse Nightclub shooting in Orlando. Demonstrators lay down on the concrete and brick for several minutes to remember the 49 victims of the mass shooting. They held…

The NRA’s survey to Florida politicians is out

This year’s survey asks politicians whether they will repeal parts of the Marjory Stoneman Douglas High School Public Safety Act (the NRA calls it the “Gun Control/School Safety” bill). It’s not a popular idea and so far has limited public support. (Read more in TampaBay.com)

Survivors of this year’s mass shooting at a Parkland, Florida, high school are staging a “die-in” at some Publix stores in the state to protest the supermarket chain’s financial support for a pro-gun rights candidate for governor. (See more on CBSNews.com)

“I’m watching kids on TV. They’re standing outside their high school. And they’re crying because they survived a school shooting. It is so familiar and so horrifying. I’m so sad and so, so angry,” U.S. Rep. Ted Deutch wrote on Twitter. (Read more in Sun-Sentinel.com)

The cities are challenging a 2011 state statute, which was backed by the gun lobby, that outlines penalties for elected officials who try to enact local gun laws. The penalties include a $5,000 fine for elected officials, removal from office, as well as cities left on the hook for lawsuits from gun owners. (Read more in…

Participation by students in Charlotte County and North Port High during Wednesday’s national recognition of the Parkland tragedy was heartfelt and respectful — obviously planned in coordination and with the support of school personnel.

Many Democrats and supporters of gun control say the changes don’t go far enough. A recent statewide poll said 62 percent of voters in Florida support a ban on assault weapons

March for Our Lives!

Charlotte County students are going to stand up and be counted in their lives. The March for Our Lives event is a chance for students to send their message to all who will listen – 400 W. Retta Esplanade, Punta Gorda, FL 33950 10 AM March 24

“The main motivations that are pushing me forward are sheer anger and disgust toward our elected officials who have refused to take action,” Hogg said. “The motivation is to take action at the polls this November.”