Censorship is the refuge of the weak 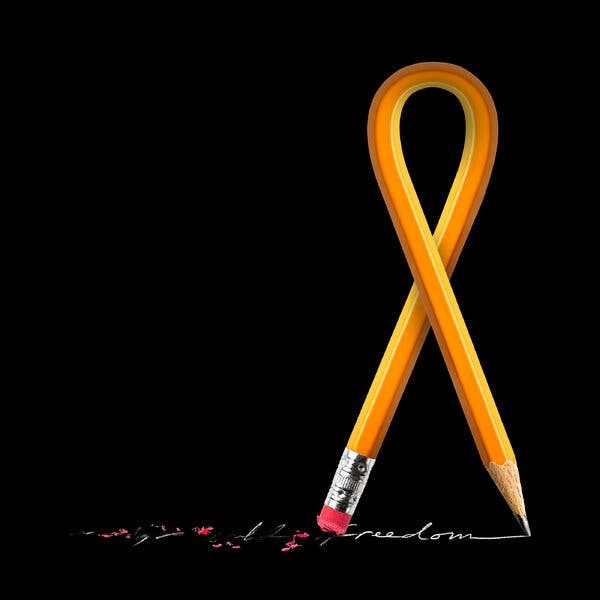 The editorial board is a group of opinion journalists whose views are informed by expertise, research, debate and certain longstanding values. It is separate from the newsroom.

Fights about free speech can feel rhetorical until they are not. Here’s what censorship looks like in practice: A student newspaper and journalism program in Nebraska shuttered for writing about pride month. The state of Oklahoma seeking to revoke the teaching certificate of an English teacher who shared a QR code that directed students to the Brooklyn Public Library’s online collection of banned books. A newly elected district attorney in Tennessee musing openly about jailing teachers and librarians.

In Florida today it may even be illegal for teachers to even talk about who they love or marry thanks to the state’s “Don’t Say Gay” law. Of course, it goes far beyond sex: The sunshine state’s Republican commissioner of education rejected 28 different math textbooks this year for including verboten content.

Acts of censorship are often tacit admissions of weakness masquerading as strength. This weakness is on full display with the imposition of so-called educational gag orders, laws which restrict the discussions of race, gender, sexuality and American history in K-12 and higher education. A political project convinced of the superiority of its ideas doesn’t need the power of the state to shield people from competing ideas. Censorship is the desperate rear-guard action of a movement that has already lost the fight for hearts and minds.

This year alone, 137 gag order bills like these have been introduced in 36 state legislatures. That’s a sharp increase from 2021 when 54 bills were introduced in 22 states, according to a report released last month by PEN America, a free speech organization. Only seven of those bills became law in 2022, but they are some of the strictest to date, and the sheer number of bills introduced reflects a growing enthusiasm on the right for censorship as a political weapon and instrument of social control.

These new measures are far more punitive than past efforts, with heavy fines or loss of state funding for institutions that dare to offer courses covering the forbidden content. Teachers can be fired and even face criminal charges. Lawsuits have already started to trickle through the courts asking for broad interpretations of the new statutes. For the first time, the PEN report noted, some bills have also targeted private schools and universities in addition to public schools.

It wasn’t all that long ago that Republican lawmakers around the country were introducing laws designed to protect free speech on college campuses. Now, they’re using the coercive power of the state to restrict what people can talk about, learn about or discuss in public, and exposing them to lawsuits for doing so. That’s a clear threat to the ideals of a pluralistic political culture, in which challenging ideas are welcomed and discussed.

How and what to teach American students has been contested ground since the earliest days of public education. The content of that instruction is something about which Americans of good will can respectfully disagree.

The Supreme Court has also recognized limits on the censorship of school libraries, if not curriculums. “Local school boards may not remove books from school libraries simply because they dislike the ideas contained in those books and seek by their removal to ‘prescribe what shall be orthodox in politics, nationalism, religion, or other matters of opinion,’” a plurality of justices wrote in a 1982 decision.

Despite the moral panic over teaching about gender and race, American parents say they are overwhelmingly satisfied with the instruction their children receive. A poll from National Public Radio and Ipsos earlier this year found that just 18 percent of parents said their child’s school “taught about gender and sexuality in a way that clashed with their family’s values,” while 19 percent said the same about race and racism. Only 14 percent felt that way about American history.

And yet, some Republican candidates are using the threat of censorship as a show of strength, evidence of their power to muzzle political opponents. Last year in Virginia, Glenn Youngkin won the governorship of that state after a campaign in which he demagogued the Pulitzer Prize-winning book “Beloved” by the Nobel Prize-winning Toni Morrison. Other candidates are looking to make it a centerpiece of their pitch to voters in the midterm elections in races from Texas to New Jersey.

Some want to extend censorship far beyond the classroom. In Virginia, a Republican state representative tried to get a court to declare as obscene two young adult books frequently banned in schools, “Gender Queer,” by Maia Kobabe, and “A Court of Mist and Fury,” by Sarah Maas. The case was dismissed last week, but if it had been successful, it could have made it illegal for bookstores, libraries to carry the books or for private citizens to sell or share them everywhere in the state.

Right-wing lawmakers are also looking to restrict what Americans can say about abortion. Model legislation from the National Right to Life Committee, which is circulating in state legislatures, aims to ban Americans from giving “instructions over the telephone, the internet, or any other medium of communication regarding self-administered abortions or means to obtain an illegal abortion.” That prohibition extends to hosting websites that contain such information.

Even when such bills fail to censor can easily cascade into vigilantism. Across the country, libraries in small towns are being closed and library staff are being harassed and intimidated. The Times reports that librarians “have been labeled pedophiles on social media, called out by local politicians and reported to law enforcement officials. Some librarians have quit after being harassed online. Others have been fired for refusing to remove books from circulation.” The American Library Association has documented more than 1,600 books in 700 different libraries or library systems that have faced attempted censorship.

Political factions on both the left and the right are insecure enough in their ideas that they’ve tried to muzzle those with whom they disagree. But only right-wing legislators are currently writing censorship into law and enforcing it with the power of the state.

For a vocal minority to ban discussion of certain facts or topics — because they make some people uncomfortable or simply to score political points — is deeply undemocratic, particularly in a nation founded on a commitment to free speech and the open exchange of ideas. Free expression isn’t just a feature of democracy; it is a necessary prerequisite.