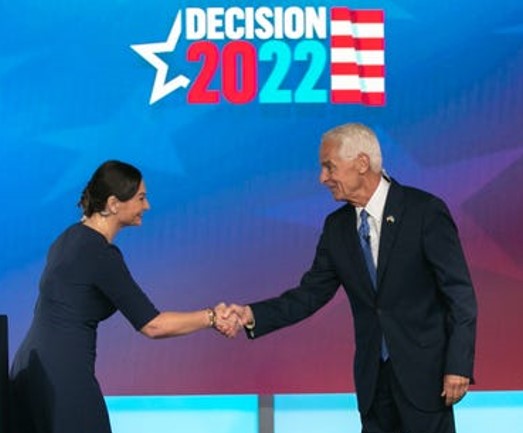 TALLAHASSEE — Democrats Charlie Crist and Nikki Fried tangled Thursday night over affordable housing, the economy, climate change and abortion, but agreed that Republican Gov. Ron DeSantis has to be stopped from winning a second term during a tough-edged, hour-long televised debate.

Crist and Fried also turned on each other, frequently. Fried repeatedly blamed Crist’s one-term as a Republican governor of Florida for policies that continue to threaten residents — particularly supporters of abortion rights.

“So you want to know why our right to privacy is going to be overturned here in the state of Florida? It’s because of decisions that Charlie made when he was governor,” Fried said, in a reference to three Florida Supreme Court justices he appointed that still serve on a court now made more conservative by DeSantis.

She said Crist has “been pro-life his entire life, including today.”

Crist fired back, telling Fried, “You know that’s just not true. And you shouldn’t say those kinds of things because you’re trying to muddy it up. And let’s understand what’s going on here. You’re losing this campaign. It’s time for desperation.”

The U.S. Supreme Court’s ruling last month overturning the constitutional right to abortion has been seized upon by Fried as a contrasting point with Crist, who has portrayed himself as “pro-life,” but still supportive of abortion rights, winning top ratings from Planned Parenthood and the National Abortion Rights Action League as a member of Congress.

Crist also tried to deflect from his GOP history by pointing out that Fried had contributed $2,000 to Republican Attorney General Ashley Moody’s campaign four years ago. Fried and Moody knew each other at the University of Florida.

“Now it’s that attorney general of Florida that you supported who’s trying to make sure that women don’t get a choice,” Crist said.

Crist’s history in the Governor’s Mansion also was cited by Fried when she accused him of contributing to the state’s current housing woes after he took $534 million from the affordable housing trust fund during his term as governor, 2007-11.

“We have a housing problem today because of your failed leadership.” Fried told Crist.

Her opponent was forced, again, to counterpunch.

“I was governor during the Great Recession,” Crist said. “We had to make hard choices. I made them and we saved 20,000 teachers their jobs. I’m very proud of that fact. Being governor’s a big job and it takes people who are ready to make big decisions. I’ve done it. I’ll do it.”

Democratic voters will decide their party’s nominee to challenge DeSantis in the Aug. 23 primary.  While Crist and Fried have taken part in eight candidate forums around the state, Thursday’s debate is the only televised exchange between the pair before the primary.

The debate was taped earlier Thursday and aired in the evening over many Florida NBC-TV stations and in Spanish over Telemundo stations. Debate moderators were NBC-6 anchor Jackie Nespral and Telemundo 51 senior political reporter Marilys Llanos.

A familiar stage for Crist

Crist, a three-term member of Congress from St. Petersburg, has run statewide six times — four times as a Republican, once as a Democrat and once as an independent.

He lost to then-Gov. Rick Scott in 2014, running as the Democratic nominee.

The two contenders were in most agreement when it comes to DeSantis.

Crist said he would repeal the law, which could prove difficult with a Legislature certain to remain controlled by Republicans after the November elections. But he said the measure was part of a series of steps taken by DeSantis to curry support from conservatives nationwide in advance of a likely presidential run in two years.

“We need a governor who wants to care about the people of our state, not the people in Iowa or New Hampshire who are going to be voting in 2024 for the Republican nominee for president,” Crist said.

The new law bans discussion of sexual orientation or identity in grades K-3 and requires that instruction at any level be age-appropriate. It’s sparked a firestorm nationally and sparked a continuing battle between DeSantis and Walt Disney Co., which came out against the measure.

Fried said DeSantis crafted the law “for one purpose only: To divide our state, to create hate.”

Both agree to sidestep on immigration

When asked about another DeSantis-backed law that bars sanctuary cities in Florida and is seen as a swipe as undocumented immigrants, both Democrats condemned the message it sends, but stopped short of vowing to overturn it.

Crist and Fried both said they were in favor of comprehensive immigration reform, a vague catch-all that Congress has been nibbling around for decades.

They also both pledged to advance state policies aimed at seriously addressing flooding and infrastructure damage related to climate change and to take steps at sustaining Florida’s environment.

Both candidates said they supported stricter gun limits, including a ban on assault-style weapons. Responding to a question prompted by the ongoing court sentencing trial of Marjory Stoneman Douglas High School shooter Nikolas Cruz, both contenders said they supported him receiving the death penalty.

Fried, however, gave a more detailed explanation, saying she concluded that Cruz should be executed after speaking with parents from the Parkland school who said that was the appropriate punishment.

“I stand united in hope that the judge and the jury do the right thing and put this guy to death,” she said.

No mutual pledge of support after primary

But when it comes to what happens following the Aug. 23 primary, Crist and Fried struck a more divisive note.

While Crist is better financed than Fried, has won endorsements of most of the Democratic Party’s major union allies and has led in the few public polls conducted in the race, he couldn’t get Fried to pledge her support if she loses the primary.

“I’ll pledge to you, if you win the primary, I’ll endorse you that night,” Crist said. “I hope you will do the same for me now.”

“If we vote for Charlie, we’re going to see Ron DeSantis running for president, because he’ll get another term,” Fried said. “If you vote for me in this primary, you will have a fighter, and we will end Ron DeSantis’ career.”

Republicans used the Democratic gubernatorial debate to bash Fried and Crist, and boast about Gov. Ron DeSantis’ work in steering the state during the COVID-19 pandemic and delivering a state budget surplus.

She slammed Crist’s debate performance as “defensive, condescending, and disconnected.”

“This debate showed why Charlie has backed out of every single debate but this one,” she said in a statement. “His record is too embarrassing to defend. His support is a mile wide and an inch deep and only getting shorter.”

Samantha Ramirez, a Crist campaign spokeswoman, also issued a statement, saying Fried “floundered on stage” and declaring him the winner of the contest. Ramirez said “he clearly laid out his vision of a Florida for all and kept his focus on the true opponent to building a brighter future for Florida, Gov. Ron DeSantis.”

Facebook
Twitter
Email
PrevPreviousI work for midwestern Democrats and I know how to win back voters from the GOP
NextWe are retired Generals and Admirals. Trump’s actions on Jan 6th were a dereliction of duty.Next