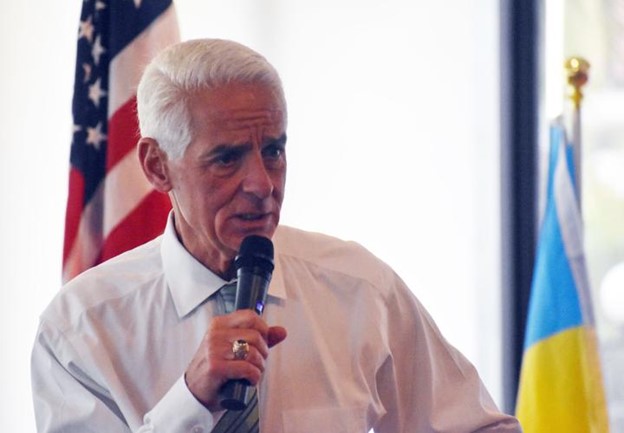 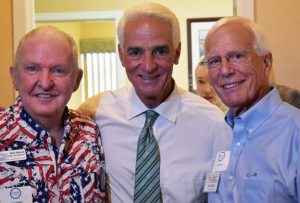 Crist, the Democratic nominee for governor, arrived at the Twin Isles Country Club on Tuesday to find roughly 100 local residents welcoming him.

“I didn’t know there were this many Democrats in the whole county,” Crist said over a round of laughter and applause.

About 120 people attended the private meet and greet at Twin Isles on Tuesday, hosted by Charlotte County Democrats. 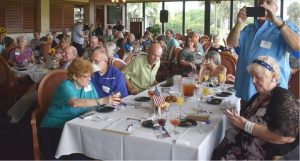 Charlotte County Democrats hosted the candidate for governor in a packed room of mostly older supporters who welcomed Crist with cheers of “Charlie! Charlie!”

Crist gave a roughly half-hour speech after shaking hands and taking photos with supporters. His podium was flanked with two U.S. flags on either side; behind him were the flags of the Republic of Ukraine and the original LGBTQ Pride flag.

During his remarks, Crist repeatedly criticized the incumbent governor for allegedly using his position as a way to gather attention for a future run at the presidency. He compared the recent migrant re-location to similar actions done by Donald Trump and other elected Republican officials.

“It’s a race to the bottom, let’s be honest,” said Crist, himself a former Republican during his previous term as governor.

Crist also hammered DeSantis on the issue of abortion. He pointed to the similarities in a new abortion law supported by DeSantis and a federal ban proposed by South Carolina Sen. Lindsey Graham — both laws ban abortions after 15 weeks.

“Except Ron’s is worse,” Crist said, adding that DeSantis and GOP lawmakers included no exceptions for pregnancies caused by rape or incest.

The former governor also spoke about his environmental credentials from his first term. Under Crist’s direction, Florida purchased 187,000 acres of sugar farming land and restored it to natural growth.

“I understand how important the environment is in Florida,” Crist said, linking the state’s natural beauty to what he said was the vital tourism sector.

Crist previously served as governor of Florida from 2007 to 2011. Before then, he had been elected to the positions of education commissioner and attorney general. Initially a Republican, he changed his party affiliation to independent in 2010 and then to the Democratic Party in 2012.

“I didn’t know there were this many Democrats in the whole county.” Charlie Crist, talking in Charlotte County

Crist previously attempted to return to the governor’s office in 2014, but lost to Rick Scott in a tight race. In 2016, he was elected to the House of Representatives from Florida’s 13 District; he was re-elected in 2018 and 2020, but resigned his seat in August to focus on the governor’s race.

The former governor was joined at the Twin Isles Club by Andrea Doria Kale, the Democratic candidate for the 17th Congressional District. Kale jumped into the race facing down incumbent U.S. Rep. Greg Steube after the previous candidate, Dan Lambert, pulled out.

Kale, a North Port resident, said that she was eager to face Steube in the general election, identifying him as one of 13 federal legislators from Florida who objected to certifying the 2020 Electoral College vote.

“There’s too much at stake,” Kale said.

Crist and local Democratic officials encouraged attendees to get involved in voter outreach, whether it was knocking on doors or talking to undecided voters in their families and communities.

“We need to get everybody to the polls,” said Teresa Jenkins, chair for Charlotte County Democrats.

Facebook
Twitter
Email
PrevPreviousCensorship is the refuge of the weak
NextWhere in the world is Ron DeSantis? He’s in Tennessee begging wealthy donors for more money.Next