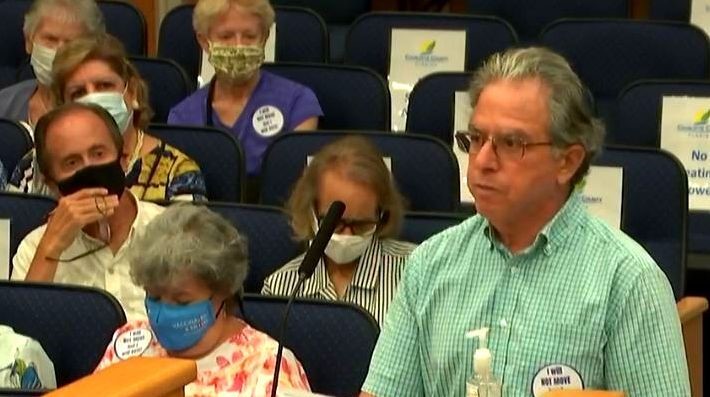 Editor’s comment: Charlotte County Dems showed up in force on May 25th to address an inappropriate comment made by the chair of our county’s Board of Commissioners. Be like CC Dem member Lenny Guckenheimer and others;  speak out when our elected officials do something wrong.  We’ll have your back!

Watch the NBC-2 news coverage of the event by clicking here. Below,  read the Charlotte Sun’s coverage.

in protest of its May 11 vote making the county a Second Amendment Sanctuary and telling those in opposition to leave if they don’t like it.

The commissioner knew he made a mistake two weeks ago.

On May 11, Truex summed up the board’s unanimous approval of a largely symbolic Second Amendment Sanctuary resolution.

May 11 was a meeting where gun rights enthusiasm reached a fevered pitch. Local gun control advocates say they were not in attendance due to short notice. The county has now joined a growing number of local and state governments seeking to protest current and future laws restricting gun ownership.

But Tuesday, the tone was different in the commission chambers. Instead of the dozens of gun rights locals, about 20 anti-sanctuary citizens, many from the local Democratic party, attended for the afternoon public comment. They all wore stickers saying “I will not move, but I will VOTE!”

Englewood resident Leonard Guckenheimer expressed dismay that a board which takes its job of representing citizens so seriously, would suddenly choose to exclude people they did not agree with.

“You are (usually) very careful in the manner that you speak,” he told Truex. “Maybe it was in jest … It’s out there in the record now. It’s there permanently.”

“There are many gun owners who are irresponsible, mentally ill, angry, ignorant, they’re gang members, drug addicts, but now who feel empowered,” she said.

“He just told a bunch of armed people that if you don’t like someone, you can tell them to move,” Guckenheimer told The Daily Sun.

He asked the commission to adopt a resolution saying, “Charlotte County has an open and inclusive community respecting the diversity of citizens in all respects.”

After Guckenheimer spoke, Truex asked for permission to address the chamber.

“That was a statement that should not have been made from this dais, and it’s not reflective of the entire board,” he said. “It was pretty much out of character for me.”

He tried to explain his mindset, but said finally, “Folks, when you mess up, you’ve got to stand up. You’ve got to own it, and I did. I messed up, and I apologize.”

Commissioner Joe Tiseo praised Truex for apologizing, stating that it’s a hard thing to do. But apologizing was not the hard part, Truex said. It was reading the emotional emails he received.

“I tried to hear through the anger and the disappointment, and tried to pay attention to the words that were written … It’s very difficult to be called out and held accountable for your words.”

On that day, he said, “When I left this chamber, I knew I screwed up, quite frankly … The last thing I ever want to do is disappoint my family, my community, my board members. That’s not who I am.”

The audience applauded Truex’s statement, and most said they chose not to speak out against him after that.

Bill Welsch, chair of Indivisibles SWFL, criticized the commission as a whole for adopting the resolution.

With all the issues the commission is tackling, Welch said, “You found time to declare the county a gun sanctuary, protecting us from all the wild-eyed radicals that want to take away our guns … All I can say about that is, really? That’s, like, a major issue in our county?

“All this unnecessary resolution does is provide a state for commissioners to show how ardently they support the Second Amendment.”

Given that 100 people a day die from gun-related incidents, he said, quoting the U.S. Centers for Disease Control and Prevention, a better move would be to convene a panel of experts and get their opinions on the best way for citizens to protect themselves from guns.