Charlotte County Women’s Rally: we are loud, we are bold, we are angry 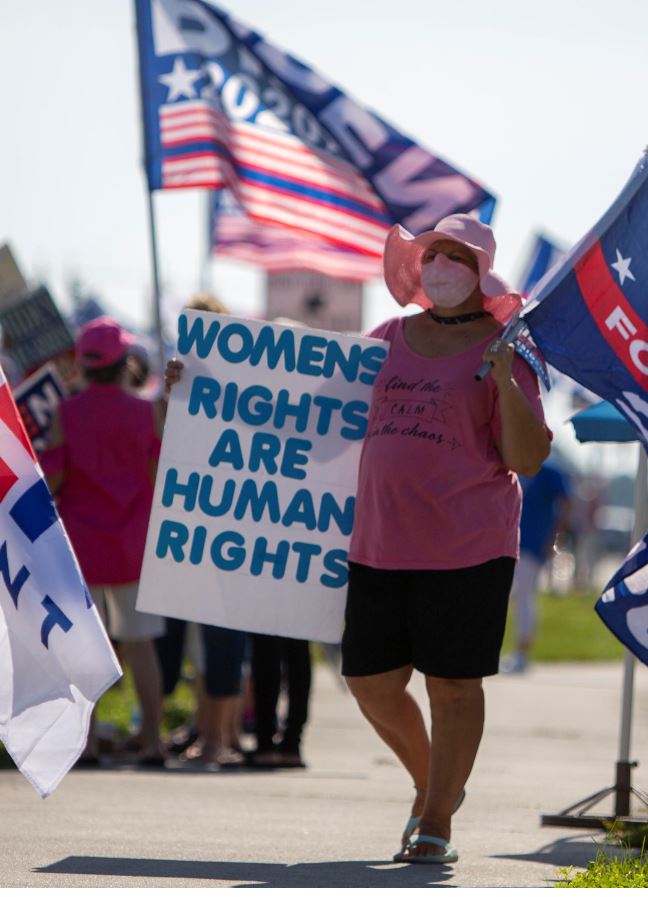 On Saturday, October 17th, the loud and proud voices of 165 Charlotte County women and those who support them delivered one, unified message to the Trump administration: “We’ve had enough!” at the event held on Tamiami Trail in Port Charlotte. The goal of the rally was to advocate for women’s rights, access to health care, LGBTQ rights and reproductive freedom.

The local women’s rally was one of hundreds throughout the country organized as a national effort to protest the current administration’s illegitimate attack on our Supreme Court by holding confirmation hearings that began just 21 days before Election Day. This threat undermines hard-fought victories for women’s rights won over the past four decades with the strong support of former Supreme Court Justice Ruth Bader Ginsburg.

Economic justice, racial equality, Roe v. Wade and fair employment opportunity are just a few of the rights at stake. But by far the most encompassing agenda item on the administration’s docket of destruction affecting past accomplishments of women and 20 million Americans is the Affordable Care Act (ACA).

As a courageous John McCain saved the ACA in 2017 by just one vote, the ACA now faces destruction by just one vote from a conservative, far-right leaning Supreme Court nominee, Amy Coney Barrett, on track for confirmation October 22nd.

And that’s the main reason why we are now so angry. Speakers at this event echoed these urgent concerns.

Teresa Jenkins, Chair of the Charlotte County Democratic Executive Committee, stated “Many people today are angry, but women are particularly angry. They’re bearing the brunt of the economic fallout of COVID-19. The rights that women fought hard to obtain have continually been under assault by the Trump administration. Now his ultra-conservative Supreme Court nominee’s writings and statements on health care, sexual assault and gender-based discrimination demonstrate that women’s social and economic equality is threatened by a cynical, political power grab. After almost 4 years of the Trump administration, women understand that democracy is not a spectator sport. We can’t weigh in on the nomination, but we can correct this country’s course by electing Democrats up and down the ballot next month.”

David Jones, 2020 Democratic candidate  for the FL House of Representatives, District 75 and ardent supporter of both women’s rights and the environment, emphasized the importance of a national Democratic victory for our daughters and granddaughters.

Linda Coe, aged 71 and waiting for her same-sex partner of 41 years to arrive, explained, “It’s time for women to stand up for women and protest both the nomination process and the nominee in this Supreme Court debacle.”

Sharon Winesett, a 67-year-old breast cancer survivor, stated, “What really gets me is how the Barrett confirmation will undo all of the successful efforts of RBG and set us back decades.  And, as a cancer survivor, I am very concerned about survival of the ACA.”

Alyce O’Keeley, age 85 and her daughter, Terri Caffelle, age 63, attended as a mother-daughter team.  Alyce, a long-time veteran protester for Democratic values, “wants everyone to understand how angry women are about threats to the ACA and Supreme Court.”

Brian Maloney, age 66, stated “I’ve reached my limit with this president and the daily onslaught of his attacks on democracy and the American people.”

Republicans in the United States Senate may not have heard our voices trying to penetrate the protected walls of the Senate chamber last Saturday, but they will hear our vote.  If there is one particular voting group positioned to take down this administration, it is women.

We may not be able to stop Amy Coney Barrett’s nomination, but we CAN vote to send Republications to the unemployment line. Our message to the spineless Republican senators and representatives beholden to Donald Trump as a political lifeline is hands off our bodies, our health care and our rights!

Continue voting Blue all the way down the ballot now and through November 3rd.

Watch this video about our Women’s Rally in Port Charlotte on October 17th.

Postscript:  Because of the increase in demand for food during this public health pandemic, the Charlotte County Democratic Party requested attendees bring non-perishable food items to be distributed to food pantries across the county. The combination of need and anxiety makes these food drives essential for Charlotte County. Please continue to drop food off at our headquarters on 3596 Tamiami Trail in Port Charlotte between 10 am and 2 pm daily, except Sunday.