Climate change is not negotiable 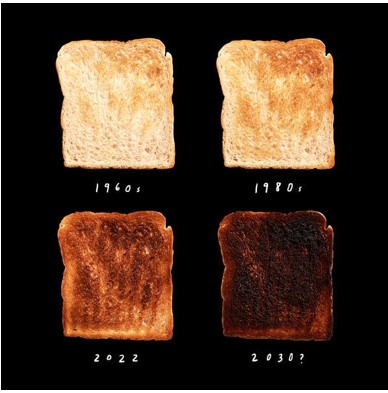 The editorial board is a group of opinion journalists whose views are informed by expertise, research, debate and certain longstanding values. It is separate from the newsroom.

The American West has gone bone dry, the Great Salt Lake is vanishing and water levels in Lake Mead and Lake Powell, the two great life-giving reservoirs on the Colorado River basin, are declining with alarming speed. Wildfires are incinerating crops in France, Spain, Portugal and Italy, while parts of Britain suffocated last week in temperatures exceeding 100 degrees Fahrenheit.

Yet the news from Washington was all about the ability of a single United States senator, Joe Manchin, to destroy the centerpiece of President Biden’s plans to confront these very problems — roughly $300 billion in tax credits and subsidies aimed at greatly expanding wind, solar, electric car batteries and other clean energy technologies over the next decade. Had it survived, this would have been the single biggest investment Washington had ever made to combat the ravages of a warming climate.

This was more than another setback for Mr. Biden, who had already seen his climate ambitions threatened by the Supreme Court and rising oil and gas prices. It undercut American competitiveness in the global race for cleaner fuels and cars, and made a mockery of Mr. Biden’s efforts to reclaim the leadership role on climate change that Donald Trump squandered.

Mr. Biden made bold promises to America and the world in his early months in office, designed to honor, at long last, America’s commitment at the Paris climate summit in 2015 to keep global temperatures from rising 1.5 degrees Celsius above preindustrial levels. That is the threshold, scientists believe, beyond which wildfires, floods, biodiversity loss, rising seas and human dislocation become significantly more devastating — and just a few tenths of a degree hotter than the world is today.

Reaching that 1.5 number or even staying below two degrees would require a radical transformation of the world’s energy systems, replacing fossil fuels with low carbon and ultimately carbon-free energy sources, and doing so not on a leisurely glide path but quickly, cutting greenhouse gas emissions in half by 2030 and effectively zeroing them out by midcentury.

Mr. Biden matched his ambitions to these goals: a 50 to 52 percent cut in American emissions from 2005 levels by 2030, and net zero emissions by 2050. Along the way, he said, he would eliminate fossil fuel emissions from power plants by 2035. This was anathema to Mr. Manchin, who has strong ties to West Virginia’s coal industry and has received generous campaign contributions over the years from oil and gas interests.

It must be said that Mr. Manchin was hardly alone in his opposition to Mr. Biden’s plans. His recent prominence owes much to Mitch McConnell and other Senate Republicans, not one of whom stepped forward to support the president or offer a plausible alternative. Had enough Republicans joined with the Democrats to construct a bipartisan climate bill, Mr. Manchin’s longstanding, entrenched opposition to necessary action on climate change would have been irrelevant. Instead, it was decisive. He became a necessary swing vote to get Mr. Biden’s program approved in an evenly divided Senate under a process known as budget reconciliation.

Without congressional backing, Mr. Biden has fewer tools to achieve his goals, which now seem out of reach. His best course is to take the same regulatory path President Barack Obama was forced to follow after the Senate’s last colossal climate failure — a cap and trade bill that passed the House in 2009 but died in the Senate the following year. Using his executive authority, Mr. Obama secured big improvements in automobile efficiency and ordered reductions in power plant emissions, which didn’t take effect, although the power companies managed to achieve them on their own by burning cleaner natural gas and closing inefficient coal-fired plants.

Major new improvements in the power sector, which still account for about one-quarter of America’s greenhouse gas emissions, may be constrained by the recent Supreme Court decision limiting the Environmental Protection Agency’s regulatory flexibility, but Mr. Biden could devise a more modest and legally acceptable rule. He can and must push forward with new rules he has already ordered up to control emissions of methane, a potent greenhouse gas, as well as a suite of new mileage standards for cars and light trucks that would compel automakers to double down on their efforts to sell all-electric vehicles. The Interior Department can also continue its efforts to promote wind and solar power, which were jump-started under Mr. Obama’s interior secretary, Sally Jewell. Mr. Biden embraced this course in a speech on Wednesday in Massachusetts.

The president and his interior secretary, Deb Haaland, could help further by bringing clarity to the administration’s policies on oil and gas drilling, which right now are confusing. Mr. Biden pledged in his campaign to halt new oil and gas leasing on federal lands, which is a significant cause of greenhouse gas emissions. That promise seems long ago and far away. Interior’s recent five-year offshore drilling plan opens the possibility of leasing in parts of the Gulf of Mexico, while a recent environmental impact statement does not foreclose, as environmentalists had hoped, the Willow Project, ConocoPhillips’s proposed development of oil and gas resources in the fragile Western Arctic.

Mr. Biden is obviously in a tough place on drilling, given the political peril of high gas prices and their toll on American household expenses, plus the possibility that Vladimir Putin’s hold on Russian oil and gas supplies could drive them even higher. The environmental community is beyond nervous about the potential for more drilling in the Gulf of Mexico and Alaska. Meanwhile, there are other protective measures that are still available to the president, including reforms of climate-intensive farming practices and nature-based solutions to climate change, which would involve putting large areas of land and water off limits to commercial activity.

One thing Mr. Biden has going for him is the economic tailwinds created by science and technology, private sector ingenuity and earlier government investment. That includes, prominently, the $90 billion in clean energy investments in the 2009 economic recovery act, which were maligned by Republicans because of the failure of one solar panel manufacturer but have helped yield a spectacular drop in the cost of renewable energy over the last decade — nearly 90 percent for solar power and about 70 percent for wind power, not to mention the emergence of the electric car. (Tesla benefited from a big federal loan from the 2009 investments.)

Coupled with coal’s precipitous decline, these technological gains have helped cause a roughly 20 percent drop in emissions since 2005. This puts the United States on track to reduce emissions by 24 percent to 35 percent below 2005 levels by 2030, according to a recent report by Rhodium Group, a research firm.

That, as they say, is not nothing, but it’s nowhere near enough to meet Mr. Biden’s pledge to the world. For that, we will need a huge infusion of federal money, which in turn means a concerned and engaged Congress. The threat posed by climate change to Americans’ lives and livelihoods is urgent and severe, and it requires significantly more commitment from those who are elected to protect them.