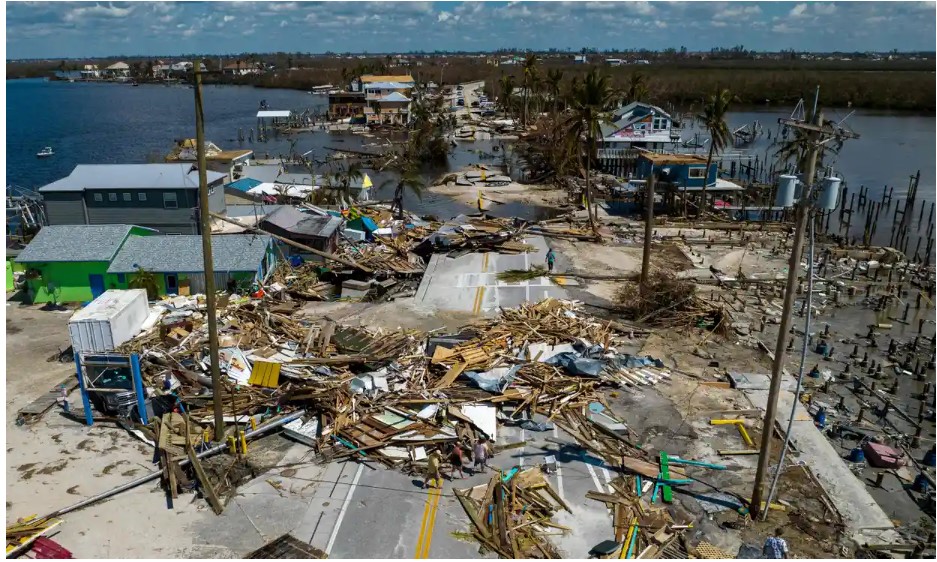 The following editorial was published in The Daily Sun on Jan 17, 2023.

OUR POSITION: Florida has a lot at stake in dealing with climate change.

There were 18 catastrophic weather events and natural disasters in the U.S. where damages exceeded $1 billion, according to the U.S. National Oceanic and Atmospheric Administration.

Those weather and climate change events killed 474 people, according to the U.S. agency. That of course, includes Hurricanes Ian, Nicole and Fiona — as well as heat waves, droughts and winter storms.

Damages for the 18 disasters totaled $165 billion and is the third most costly year on record behind only 2017 and 2005.

Hurricane Ian — which hit southwest Florida and much of the rest of the state as well as South Carolina — had damages of $112.9 billion. That is the third most costly tropical storm on record behind only Hurricane Katrina (2005) and Hurricane Harvey (2017).

That damage number is eye popping — and sobering considering the impacts on our neighbors, our coworkers, our friends and small businesses already challenged by the coronavirus pandemic and all its impacts.

Since 2016, major disasters and weather events in the U.S. have killed more than 5,000 people with more than $1 trillion in damages, according to NOAA (which is the parent agency of the National Weather Service).

We know, first hand, the impacts Ian had on our communities and how much bigger and more dangerous the 2022 storm was than Hurricane Charley in 2004. Hurricane Ian — with its 60-mile-wide eye wall — was significantly bigger than Charley (which caused $16 billion in damage in 2004).

Southwest Florida has changed a lot since 2004 — and so have storms and weather events.

Water temperatures in the Gulf of Mexico are warmer, sea levels are up across some of Florida’s coastlines and we are seeing more Sahara dust impacting our weather.

We should brace for bigger and worse storms. We’ve been seeing that with wildfires, droughts, winter storms and more intense weather across the country and the world.

More intense storms cause more significant damage, more loss of life and livelihoods and drive everything from insurance coverage and costs for recovery to larger migrations globally.

The climate change debate has often centered on the economic and contemporary social impacts of proposed environmental, land-use and renewable energy solutions to a warming climate and rising sea levels.

Jobs, livelihoods and our economy should not be ignored as we navigate some of the obvious impacts of climate change and larger and more destructive storms.

But neither should the economic, personal and community impacts warm temperatures and deadlier storms are bringing to our doorstep. The mammoth amount of damage brought by Ian to southwest Florida and its lingering impacts will hopefully give us some fresh eyes towards changes with the climate and how our communities and state navigate potentially more intense weather.

It can also serve as a reality check to some of the partisan fights over climate change. That debate will be helped immensely if potential paths forward are collaborative rather than fueled by vested economic interests on one hand and hypocritical pushes against emissions or things like gas stoves from an elite class with private planes, multiple homes and high-end gas stoves.

There are some common sense answers and lingering questions beyond cable news and partisan talking points. Why isn’t Florida — the Sunshine State — a top solar state and how do you get more rooftop solar on homes and businesses?

What should we do about land-use, water supplies and, of course, our insurance system going forward with the real potential of more monster storms and disasters?

That means solutions that move beyond the political side aligning with insurance and another with trial attorneys.

We should be bracing for bigger, badder storms. We also need to figure out some very important paths forward.