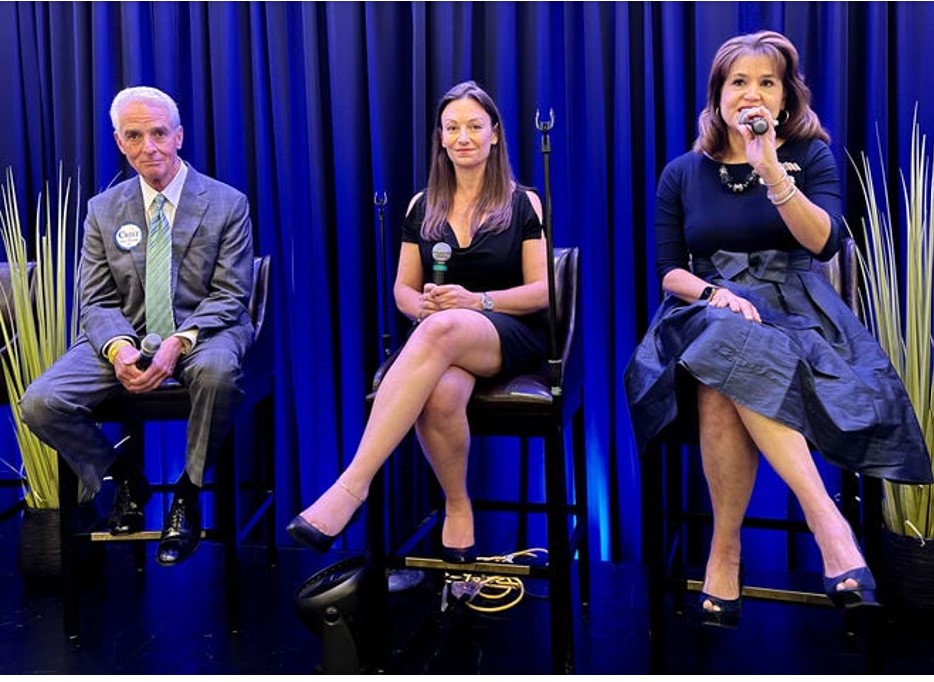 A surefire way to get Florida’s Democratic voters amped up is to invoke Gov. Ron DeSantis, a polarizing figure rivaling former President Donald Trump for the ire he elicits on the left in his home state.

So the Democratic candidates for governor take every opportunity to pillory DeSantis and paint him as a grave threat to Florida.

On Sunday, U.S. Rep. Charlie Crist went further, appearing to take aim not just at DeSantis, but at his base of supporters.

Crist’s description of DeSantis as appealing to the “toothless crowd” came during an event in Lakewood Ranch that featured all three leading Democrats running for governor. It was the first time all were on stage together answering questions from a moderator in a debate-like format.

Moderator Rob Lorei, host of the Florida This Week program on Tampa PBS station WEDU, led off the panel discussion by asking about DeSantis.

Lorei highlighted a statement by a former Republican consultant who said DeSantis has absolute authority in Florida, a remark made on the heels of the governor getting lawmakers to pass legislation punishing Disney and redrawing congressional district lines as he saw fit.

Agriculture Commissioner Nikki Fried went first, saying the governor “is more than a dictator, he is scary.” Crist then tore into DeSantis, criticizing his treatment of the LGBTQ community and local officials before eventually seizing on the governor’s opposition to mask mandates in schools during the height of the delta wave of COVID-19.

Crist said “that one got personal” because his 5-year-old niece contracted COVID-19 after attending a Pinellas County school where “nobody’s wearing a mask.” Her 2-month-old sister later tested positive for COVID-19 as well, Crist said.

“So while Ron DeSantis is trying to score political points with the red meat, hard right, toothless crowd, his actions have consequences on Florida families,” Crist continued. “He’s more focused on winning in (2024) and trying to appeal to Iowa voters, more than caring about Florida people. It’s horrific. We gotta beat him.”

The crowd applauded and the debate moved on to other issues, such as the environment and education. Nobody mentioned Crist’s “toothless” comment.

Asked about the comment, Crist’s campaign denied that he was targeting conservative voters with a word that can evoke stereotypes of poor, rural people. 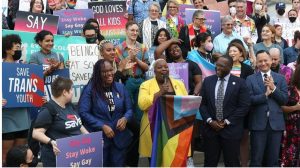 “Charlie was referring to the toothless, spineless crowd that aids and abets DeSantis’s crusade to hurt, rather than help Floridians – the legislators, lobbyists, and special interests who bend to his whims and only care about delivering red meat for their base,” said Crist Press Secretary Samantha Ramirez. “To imply that he meant anything else is nonsense.”

Fried touched on the “toothless” comment in a tweet Monday morning after a USA TODAY Network-Florida article about the remark was posted online.

Fried Communications Director Keith Edwards then shared a video clip of the comment on Twitter and said: “This is how you lose Florida for the 4th time: by mocking voters.”

During the 2016 presidential campaign, Hillary Clinton famously called certain Trump supporters a “basket of deplorables,” a derisive remark that Republicans seized on to paint her as elitist, condescending and out of touch. Trump backers began calling themselves deplorables, wearing the criticism as a badge of honor.

Lately it’s been figures on the right who have been accused of stereotyping and smearing people by equating those who question controversial legislation restricting how sexual orientation and gender identity can be taught in schools with “groomers,” a term used to describe people who prey on children.

Crist is a former Republican governor turned Democrat who has been leading in primary polls against his rivals — Fried and state Sen. Annette Taddeo — for the Democratic nomination for governor.

Part of Crist’s appeal is his genial personality, and he’s also long pitched himself as somebody who doesn’t go to extremes, can work across the aisle and is a champion for average people, all qualities at odds with how some might view his “toothless” remark.

Trump won Florida twice, the second time by tripling his first margin of victory, and DeSantis narrowly won in 2018. Democrats need to expand their appeal to be successful in 2022, and can’t afford to alienate a large swath of voters.

Forum calls for Democrats to broaden their support

Sunday’s panel discussion was part of a fundraiser for the Manatee County Democratic Party held at Grove restaurant. It touched on the importance of Florida Democrats broadening their support, with Lorei asking how the candidates would put together a “winning coalition.”

“It’s important to just make sure we get out the Democrats, but it’s equally important that we motivate the independents and the moderate Republicans to vote for us,” Fried said, adding that she would be “able to get into our rural communities” as agriculture commissioner.

Crist also said he will campaign in red areas of Florida.

“You gotta go to every place, every county,” said Crist, who noted his second stop after announcing his campaign was in Pensacola in the conservative Panhandle region. “You gotta go out there to try to reduce the margin. That’s absolutely the truth and that’s what it’s gonna take to win this election.”