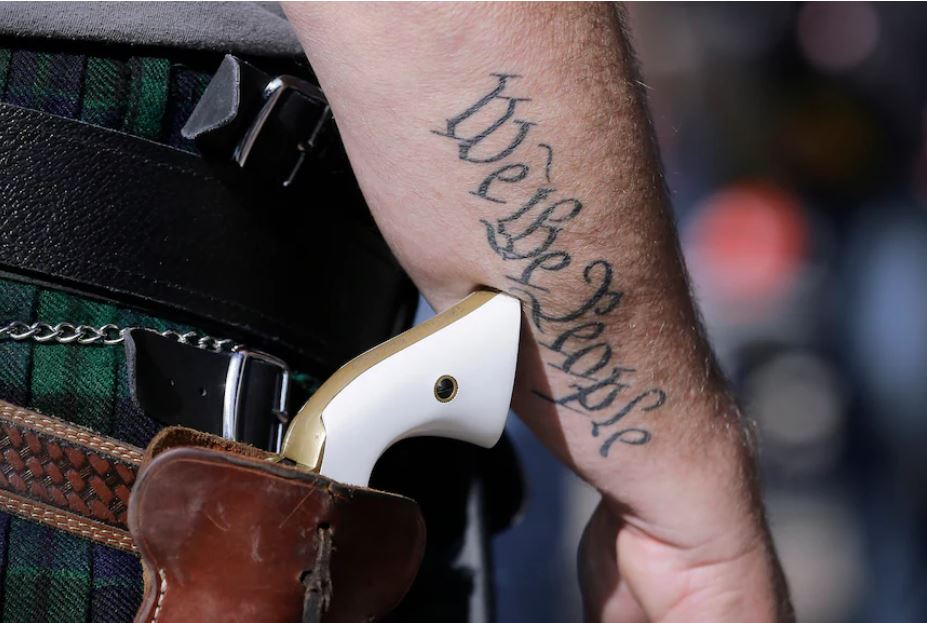 Gov. DeSantis expects our Legislature to pass a bill this year that would allow people to carry guns without a concealed-weapons permit. The proposal is known by gun-safety advocates as “permitless carry” and by its Second Amendment supporters as “constitutional carry.”

Most Floridians oppose such a bill. A poll of 500 voters conducted by Giffords Florida, a state affiliate of the gun violence prevention group that was founded by former Congresswoman Gabby Giffords,  shows that 68% of Miami-Dade voters oppose permitless carry. That includes 65% of registered Republicans and 60% of voters who say they voted for Gov. DeSantis in November.

The survey says that 60% of Miami-Dade voters “strongly” oppose the proposal. And the poll says that once voters are informed that the policy change would allow anyone who can legally purchase a firearm to carry a gun in public, opposition grows by 12%, with 81% of Hispanics, 76% of non-party-affiliated voters, and 69% of DeSantis voters opposing such a bill.

Footnote: Giffords Florida was launched in August of 2022. The national group was founded by and named after former Arizona Congresswoman Gabby Giffords, who survived being shot in the head while meeting with constituents near Tucson, Arizona in January 2011. (Source: https://giffords.org/press-release/2022/08/giffords-launches-giffords-florida/)

On Thursday, Florida Speaker of the House Paul Renner said “yes” at a press conference when asked by DeSantis if the Legislature would push for a permitless carry bill in 2023.

And in Fort Myers Beach on Friday Dec 16th, for a bill signing ceremony on the property insurance package passed earlier this week, DeSantis said the issue of allowing gun owners in Florida to carry guns without a concealed-weapons license is something that he’s always supported.

“The last two years, it was not necessarily a priority for the legislative leadership,” DeSantis said. “But we’ve been talking about it and Renner’s pledged publicly and that’s moving forward, and it’ll be something that will be done in the regular session

FL Senate President Kathleen Passidomo did not speak on the gun issue on Dec 16th.

In the wake of the tragic February 14, 2018 massacre of 17 students at Parkland’s Marjory Stoneman Douglas High School, Florida significantly improved its gun laws, but it still has a long way to go.

Florida’s package of reforms in 2018 included creating an extreme risk protection law, raising the minimum age to purchase firearms from dealers to 21, requiring a three-day waiting period on purchases from dealers, and closing the Charleston Loophole*. In 2020, Florida had the 29th-highest gun death rate in the country and the 17th-lowest rate of crime gun exports from our state, likely due to this 2018 legislation.

Footnote: *The Charleston Loophole is a dangerous gap in the federal system that allows gun sales to proceed after three business days, even if the background check has not yet been completed. States such as Florida addressed this loophole by giving background check operators more time to determine if a buyer is prohibited.

To save lives from gun violence, Florida legislators should require a background check on all firearm sales, expand domestic violence protections, invest in community violence intervention strategies, and certainly NOT approve permitless carry, as current “shall-carry” legislation is more than adequate to protect Floridians’ 2nd amendment rights, while protecting the public.

Florida does not prohibit a person from carrying a concealed firearm on or about his or her person if the person has a license to carry a concealed firearm. Florida is a “shall issue” state, meaning that the state Department of Agriculture and Consumer Services must issue a concealed weapons license if the applicant meets certain qualifications.

The Department must issue a license to carry a concealed weapon if the applicant is a US citizen, at least 21 years old, has no felony convictions, no history of drug or alcohol abuse, no mental incapacitation for at least 5 years, etc. Perhaps most importantly, the applicant must have completed firearms training. The issued license has a duration of 7 years and renewals are mailed to the licensee at least 90 days in advance of its expiration. In 2016, 1.5 million Floridians were concealed weapons permit holders.

These requirements are not unduly restrictive and ensure that persons authorized have met minimum safety requirements.

In Florida, firearms owners currently may:

Today, Florida generally prohibits the open carrying of a firearm.1 Persons licensed to carry a concealed firearm in Florida who possess a firearm in a concealed manner may “briefly and openly display” the firearm to the ordinary sight of another person, unless the gun is intentionally displayed in an angry or threatening manner, not in necessary self-defense.2

Florida also prohibits the exhibition of a firearm in a rude, careless, angry, or threatening manner, not in necessary self-defense, in the presence of one or more persons.3

In the Sarasota Herald Tribune on Dec 27, 2022, John Hoover wrote in a letter to the editor:

“Gov. Ron DeSantis and the state Legislature seem determined to make “constitutional carry” legal in the state of Florida. This is unequivocally the worst idea imaginable.

Florida is known for its citizens having serious problems with impulse control.  Imagine if you will “Florida Man” carrying a Glock without a permit or any firearms training.

Mark my words, this law would drive up the number of gun deaths.

I am not anti-gun.  I grew up in rural Florida, where guns were part of the tool kit. But when they were not in use, they were unloaded and put away.

We did not feel compelled to take them to town or to always be armed. In my 70 years as a Floridian, I have never encountered a situation in which I needed a gun.

How is law enforcement going to sort the good guys from the bad guys until after the shooting stops? Florida deserves better than this.”

In the Daily Sun on Jan 6, 2022, the following Letter to the Editor was published.

Editor: Florida will become the next Wild Wild West if Gov. Ron DeSantis’ constitutional carry law becomes the new Florida state law. Gov. DeSantis believes that constitutional carry, popular in some other states, will result in less gun violence because no one will know who is armed and who is not.

With no permit required, there would be no formal training. As a concealed carry permit holder, the CC course I completed was a valuable part of being a gun owner. It is not enough to prove you’re not a convicted felon, a serial rapist or have not spent years in a mental institution — the main requirements for the purchase of a weapon. Owning and carrying a gun requires a thorough understanding of the conditions under which you may use your weapon. Without a formal training course, I’m afraid gun owners will use their own discretion in conflict situations. The new mantra will be “when in doubt, pull your weapon.” Self-protection will take a back seat to property protection, road rage and personal conflict.

While I am a supporter of most of Gov. DeSantis’ policies, I believe he is remiss in his support of the proposed law. Florida has never looked to other states for guidance. Let’s hope this is not the exception.

The Center for American Progress has determined through its research that by making it easy for almost anyone to carry a concealed handgun in public, right-to-carry laws increase violent crime, firearm robberies, gun thefts, workplace homicides, and mass shootings. Right-to-carry laws make it harder for law enforcement to solve violent crimes and are opposed by many law enforcement leaders across the country.

Permitless carry harms public safety by removing essential safety measures designed to ensure that those carrying handguns in public have been properly trained and vetted.

A January 2022 poll found that 70 percent of registered voters in Georgia opposed allowing adults to carry concealed handguns in public without a license. Nonetheless, Gov. Brian Kemp (R) signed such a permitless carry law in April 2022.

I implore you, as our elected legislators, to represent the majority of Floridians by opposing any change to the current legislation which would allow permitless carry of firearms in Florida.