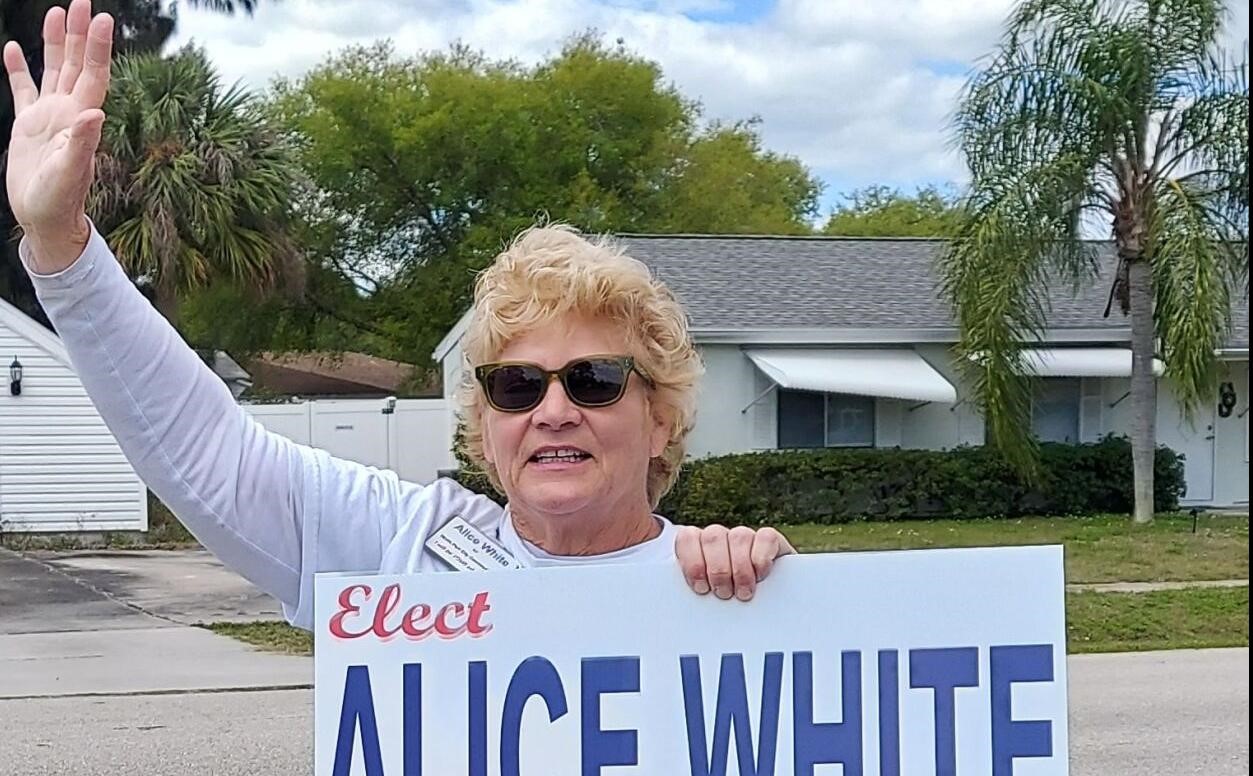 Editor’s note: Total votes cast were 8,921, which was a strong turnout; attributed to an excellent get out the vote campaign by Alice and our sister Sarasota County Dems organization. Congratulations to all!  This victory is an inspiration to Charlotte County Dems.  We can win elections, too!

“All the hard work … from everybody, it’s just wonderful,” said White, who is also known as North Port’s Tree Lady for her environmental work. “I’m so happy to do this for North Port.”

A retired school teacher and the founder of the nonprofit People for Trees, White also founded the Pie-Licious Bake Shoppe about five years ago. She admittedly surprised even herself Tuesday after voting results arrived.

The race was to be close, but she won with 60%, meaning that some Republicans switched sides for that day. White is a Democrat and had run in November against Ron Cutsinger for a spot with the Sarasota County Commission.

“Pies,” White added, “are one of those things we forget how it used to be. (Governing) … we’ve been doing things on the surface that may not be a good idea in the long-term.”

The day after, has winning sunk in?

Alice White: “It has now. I think I was in disbelief after the election results came in and thought for sure something was going to change. But when Mr. Garren called to congratulate me, I knew it was final. And then today I received a phone call from Jason Yarborough, the (interim North Port) city manager, advising me about my orientation, and then with all of the message ‘pings’ from my phone, emails, phone calls, it has definitely sunk in that I am the North Port city commissioner for District 1.”

White: “I appreciated that the campaign period was relatively short, with the qualifying period being the last week of December, and it was great to have a tremendous support system of people around me who agreed to do specific tasks which enabled me to concentrate on being a candidate.

“But I was not ready or prepared for the smear campaign mailers that came out against me. I felt those were especially disrespectful of my residency here for 30 years, the community history I had established, and the work I continue to do for the people of North Port (i.e. planning for the annual Tree Festival which will be April 24!).”

Goals as a commissioner? How will you govern?

White: “My goal is to continue to be an advocate for the people and to continue to strive for positive changes in our city that will enhance our quality of life. These don’t always necessarily have to be one-time events or happenings, but what we can have and do everyday to fully embrace this beautiful, natural part of Florida, our paradise.”

Advice to others pondering government service?

White: “Anyone who is considering being an elected official should consider the importance and value of truly knowing about where they live, the history, the people. This means having a variety of involvements and establishing roots that are grounded in being involved for no other reason other than sincerely wanting to make our world just a little nicer place to live.”

White enters the job, which pays about $31,000 annually, with plenty scheduled in the coming weeks and months. Budgeting under COVID-19 duress, revising the city’s codebook and the de-annexation of Wellen Park top that agenda. Commissioners will address the de-annexation issue in mid-April, with budgeting and updating Unified Land Development Code language also slated for commission study and approval.

“Now we have five going into budget,” Luke said of the completed commission.

The election was the second one for White this year. She ran for Sarasota County Commission as a Democrat against Republican Ron Cutsinger of Englewood. Cutsinger won 27,907 to 17,717 in the countywide race Nov. 3.

The nonpartisan city commission race included all of North Port, including the Wellen Park communities within the city limits.