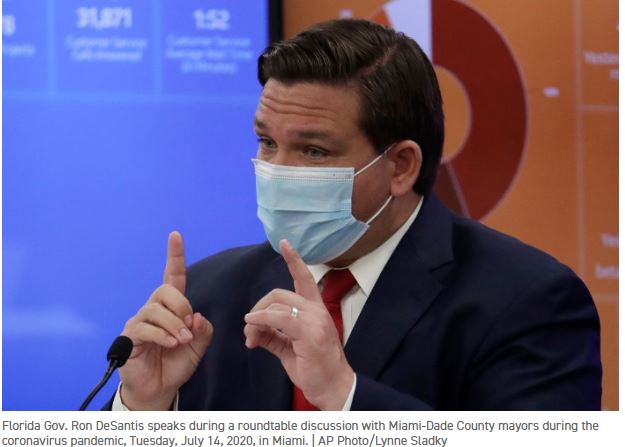 Roll back the tape – As Florida’s Delta surge exploded this summer Gov. Ron DeSantis and his team would snap when the time he was spending touting monoclonal antibody treatment for those infected with Covid-19 was used to question his support for vaccination.

Pro-vaccine — The state’s Republican governor would quickly retort that he held more than 50 vaccination events last winter and that he was criticized for setting up pop-up vaccination clinics in certain neighborhoods. And let’s not forget, DeSantis was well-versed with Operation Warp Speed and was in constant communication with the Trump administration as plans were drawn up for vaccine distribution. The governor himself got vaccinated, although he did it in private.

And now… — DeSantis held a campaign-styled event on Monday for himself (along with other Republicans such as Attorney General Ashley Moody and Chief Financial Officer Jimmy Patronis) where he reiterated his strong opposition to vaccine mandates coming from Washington, D.C., and threatened to levy fines on any local governments in Florida that imposes mandates on its employees. DeSantis contended that mandates were “anti-science” because they didn’t recognize natural immunity for those who already caught Covid-19.

Mum’s the word — But then the governor stood quietly by as Gainesville employees upset with a vaccine mandate suggested that taking the vaccine could kill them or alter their genes. DeSantis did say that mandates would harden resistance to getting shots. And the governor’s own team pushed back a little by contending that DeSantis is “both pro vaccine and anti-mandate” and the event was all about “freedom.”

Fear factor — But Monday’s event was also an exercise in outrage and fear and a far cry from moments when the governor crisscrossed the state promoting the vaccines as a moment of hope, especially for Florida’s elderly and vulnerable. (And the legal logic being espoused by Moody and the governor’s administration as to why local government can’t mandate vaccines is well… interesting.)

Evolution — It’s hard to figure out how he got here. Maybe it was because former President Donald Trump got booed when he mentioned the vaccine at a recent rally. Maybe it’s because the DeSantis administration has seen an exodus, including the looming departure of another chief of staff, of people who push back. And yeah, maybe it’s all about a GOP primary in 2024 that may evaporate quickly if Trump runs again.

What happens next? — So what’s the natural progression here? What about other vaccine mandates now in place for schools? That’s not the same, insisted a spokesperson for DeSantis. OK, but that debate is coming — and fast. And what about businesses? DeSantis railed several times on Monday about how it’s wrong for someone to lose their job if they don’t get a shot. But back in May, he suggested it wasn’t his role to dictate to businesses. So one standard for Disney, and another for Leon County?