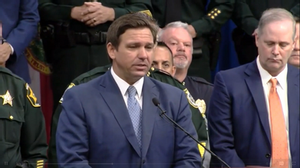 Governor Ron DeSantis this morning surrounded himself with legislative leaders, two cabinet officers, and several law enforcement personnel–all white–and except for Attorney General Ashley Moody–all male. One purpose of the gathering was to show the governor signing HB 1 into law.

The event also gave DeSantis an opportunity to blow racist dog whistles in the direction of white Republican voters.  During his remarks DeSantis disparaged two African-American leaders, Rep. Maxine Waters (D-Cal.) and Minnesota Attorney General Keith Ellison. He picked up on recent Republican criticism of Waters for her comments related to the Chauvin trial in Minneapolis. Here’s a LINK to a story about that.

Without identifying Ellison by name, DeSantis claimed, without evidence, that the Minnesota attorney general had “bungled” the Chauvin case. He then praised Florida’s attorney general and introduced Moody to speak. She was dressed in a black outfit with short sleeves that made her white pale skin stand out. There were other speakers, of course, including two sheriffs. But it was all carefully staged to clearly convey a message that DeSantis will “protect” people who identify as white from everybody else.

Contributor Darwin Gamble is a Tallahassee resident and local social justice activist. He has been involved with Tallahassee Community Action Committee and the League of Women Voters in organizing to stop the passing of HB1 into law.