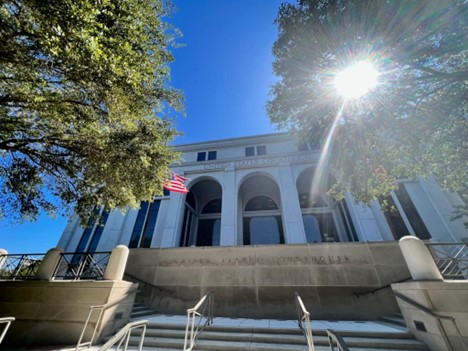 The judge hearing the suspended Hillsborough County prosecutor Andrew Warren’s First Amendment lawsuit against Gov. Ron DeSantis has been poking holes in the governor’s defense as the trial progresses in federal court in Tallahassee.

For example, when DeSantis public-safety adviser Larry Keefe took the stand to describe how he vetted Warren’s performance as state attorney with a phalanx of law-enforcement officials and private citizens, Warren’s attorneys elicited his acknowledgement that those sources overwhelmingly were Republicans. Warren is a Democrat twice elected as state attorney and a critic of the Republican governor.

U.S. District Judge Robert Hinkle, hearing the case without a jury, asked Keefe Tuesday whether, in his former job as U.S. attorney in Tallahassee, he would have done business that way.

“You would never conduct an investigation talking to people on just one side of an issue?” he asked Keefe.

Keefe allowed that perhaps one of the people he talked to was a Democrat.

“I’m just trying to find anyone that’s not a Republican or a Republican contributor” among those Keefe talked to, Hinkle noted.

Warren is asking Hinkle to issue a permanent injunction returning him to the office to which he’d been elected in 2016 and reelected in 2020.

The DeSantis defense team’s line as the trial entered its second day on Wednesday has been that the governor was so offended that Warren co-signed open letters issued by Free and Just Prosecutions, comprising prosecutors pursing criminal justice reform, that he felt obliged to suspend Warren (pending a hearing before the state Senate that hasn’t happened yet).

The letters avowed an aversion to criminally prosecuting women and doctors involved in abortions or doctors providing gender therapy to transgender people (the Legislature has banned abortions after 15 weeks but hasn’t targeted gender therapy yet, although the DeSantis administration has begun clamping down administratively).

To hear the governor and his people tell it, that amounted to a refusal to enforce a legitimate state law. They’re also unhappy that Warren had established presumptions against charging low-impact crimes, including homeless people sleeping near businesses and nonviolent resisting-arrest offenses based on civil stops of people riding bikes or pedestrians.

Warren testified on Monday that the letters represented his policy views and not a refusal to prosecute any crimes, and that his staff were free to prosecute notwithstanding the presumptions when the evidence supported it in particular cases.

Testimony from DeSantis’ legal and communications aides hasn’t supported the picture the administration is attempting to convey: that the governor’s legal team conducted a principled review of the matter and felt compelled to act.

For example, on Tuesday afternoon Keefe forcefully defended the suspension, which he said began when the governor asked him during a meeting about other matters whether any state attorneys were not enforcing the law.

“I looked into it in the course of my ongoing daily duties,” Keefe said under questioning by lead Warren attorney J. Cabou.

But there was no formal investigation, as in a criminal matter, Keefe acknowledged. Instead, he brought the topic up while conversing with people in the law enforcement community, including sheriffs and police chiefs in various locations.

Keefe consulted with the Florida Sheriffs Association too — an organization firmly on the governor’s side on criminal justice policy, though some sheriffs in Florida’s counties are Democrats.  And he talked to his own friends in Tampa, including Preston Farrior, a DeSantis financial backer, and his brother Rex Farror  ̶  both prominent Republicans.

He said he talked to Hillsborough Sheriff Chad Chronister and former Tampa Police Chief Brian Dugan, but not to sitting Chief Mary O’Connor or Dugan’s predecessor, Jane Castor, now serving as mayor as a Democrat.

Among those Keefe didn’t consult was Warren himself, who might have explained his policies, nor any staff in Warren’s office.

What Keefe did hear alarmed him — Warren’s approach to criminal justice was unleashing “chaos” and “anarchy;” he was “contumacious,” or willingly defiant of the law; also, “antidemocratic” and “thwarted [law enforcement’s] ability to protect the community,” according to his testimony.

Another theme that has emerged is the horror with which DeSantis and his team view philanthropist George Soros and his efforts to promote criminal justice reform (which, basically, entails efforts to make the system fairer to Black and Brown people, including eliminating cash bail and offering leniency for minor offenses while concentrating on more serious crimes).

Soros is a Holocaust survivor who finances lots of progressive projects, which has rendered him anathema to many on the extreme political right, as documented by the Anti-Defamation League.

The defense team led Taryn Fenske, DeSantis’ communications director, through reams of internal communications evidencing an ideological aversion to Soros and “Soros-affiliated prosecutors.” One set of talking points prepared for the governor’s August press conference was headlined, “The Soros Plan,” and mentioned his attempts at “radical change through his web of advocates, including FPJ,” the progressive prosecutors’ group.

Fenske said DeSantis might not have seen the document.

Fenske described reprimands given to aides who issued triumphalist tweets about Warren’s defenestration, including by in-house analyst Kyle Lamb and Christina Pushaw, DeSantis’ former press secretary. The governor himself scolded Pushaw, Fenske said  ̶  because he wanted attention paid to his stated reason for acting and not on his political differences with Warren, and because of the risk that the former prosecutor would sue.