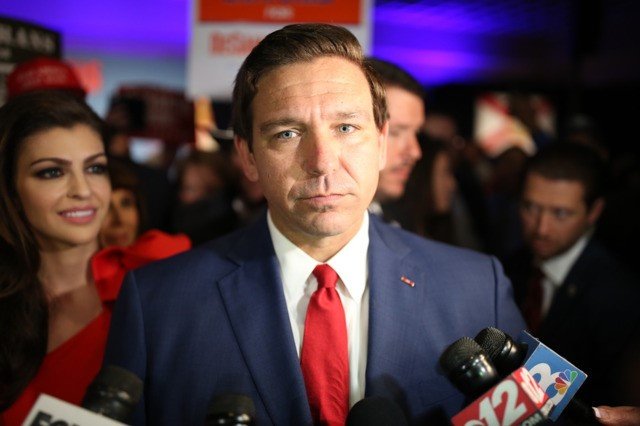 TALLAHASSEE – The biggest items on Gov. Ron DeSantis’ wish list are being roundly attacked as unconstitutional – although his tough penalties for protesters, new demands on social media platforms and voting overhaul look certain to clear the Republican-led Legislature.

A long legal siege will likely follow, with opponents already outlining lawsuit strategies. But DeSantis has reshaped the state’s highest court, where his hand-picked jurists from the conservative Federalist Society are expected  to side with him. Or will they?

“I’d be very surprised if the Florida Supreme Court, even if it’s packed with Federalist Society appointees, would be able with a straight face say that these provisions are constitutional,” said Amanda Hollis-Brusky, a California political scientist who has written widely on the Federalist Society, the influential group guiding both DeSantis and former President Donald Trump’s rightward shift of the judiciary.

“Conservatives have promoted robust speech rights, more freedom of association, and are remarkably skeptical of regulations on private companies,” she added. “It’s hard to see where the governor’s protest or social media bills fit into that.”

But for voting rights advocates, the odds may be worse. A Federalist Society leader and former Trump judicial advisor, Leonard Leo, stayed out of the former president’s failed attempts to overturn the November election results.

But Leo’s organization, The Honest Elections Project, is now promoting more restrictive voting measures moving forward in Florida and other Republican-controlled states. The Federalist Society is known for its advocacy of strictly interpreting the constitution according to what conservatives say was its original meaning.

With the Legislature entering the closing weeks of the 60-day session, DeSantis’ priorities have emerged as the most fought-over measures.

His “anti-riot” bill toughening penalties against violent protesters, which stemmed from the Black Lives Matter demonstrations, was approved by the House in a party-line vote.

Voting changes (SB 90) that include new limits on mail ballots and drop boxes also have been condemned by Democratic lawmakers in both House and Senate committees.

And DeSantis’ push to punish with hefty fines what he derided as “Big Tech” social media companies that suspend or block users and candidates for political office also is expected to be approved before the Legislature’s scheduled April 30 finish.

DeSantis, an ally of Trump already being touted as a possible White House contender in 2024, has enhanced his national profile among conservatives with his agenda, especially for coming to the defense of the former president banned from social medial platforms for allegedly inciting the deadly Jan. 6 insurrection at the U.S. Capitol.

Rep. Blaise Ingoglia, R-Spring Hill, a former Florida GOP chair and sponsor of the voting and social media legislation, denies that having a seven-member state Supreme Court filled with appointees of Republican governors has emboldened lawmakers to test the bounds of the U.S. and state constitutions.

“We don’t write bills thinking the end game is that a court is going to agree with us, because we don’t know that,” Ingoglia said. “That’s not our concern right now. It’s to write the legislation the way we think is best for Florida. And we’ll deal with any lawsuits that come later.”

Since he took office in 2019, DeSantis has filled three seats on the Supreme Court with new, conservative jurists following the retirements of the last appointees of a Democratic governor.

One of those former justices, Peggy Quince, said the governor’s anti-riot bill is “not just anti-protest and anti-First Amendment, it is outright anti-American,” citing the nation’s long defense of the free speech right to demonstrate.

The state Supreme Court is among the likely stops for any legal challenges to the controversial menu of legislation now advancing. Federal courts also may be involved, especially in reviewing voting changes.

But for the state Supreme Court, the DeSantis priorities may be a major policy test. Still, the makeup of the court already has played a role in the thinking of advocacy groups.

When DeSantis last year signed a parental consent law that had been approved by the Legislature for minors seeking abortions, it potentially clashed with a 31- year-old state high court decision that an earlier consent requirement violated Florida’s constitutional right to privacy.

While a lawsuit was expected from abortion rights advocates, it never came. Laura Goodhue, executive director of the Florida Alliance of Planned Parenthood Affiliates, said they feared a trap.

“Abortion opponents wanted the law to be challenged so our new, far-right state Supreme Court would have a chance to reinterpret the right to privacy to no longer include access to abortion,” she said. “That would open Florida up to a wide range of abortion restrictions that have previously been found unconstitutional.”

This year, though, opponents of the DeSantis agenda look ready to fight.

“I don’t know what the governor’s motives are,” said Mikah Kubic, executive director of the American Civil Liberties Union of Florida. “But we know when something is unconstitutional.”

“Killing free speech is not acceptable, denying voting rights is not acceptable,” Kubic added. “So, whether he’s doing it because he really believes it, or it provides something for a certain type of supporter is less the point than he should know this is wrong. It hurts the very principle of democracy.”

DeSantis has portrayed his efforts as aimed at blunting the possibility of voting fraud, defending small businesses from mob violence and shielding Floridians – especially conservatives – from the excesses of social media “oligarchs,” as he called them.

“We’ve seen the power of their censorship over individuals and organizations, including what I believe is clear viewpoint discrimination,” DeSantis said.

The governor’s approach, however, won’t fly with a court, warned Corbin Barthold, internet policy counsel for TechFreedom, which studies how law and technology overlap.

The legislation sponsored by Ingoglia effectively demands that social media platforms and websites carry politicians’ speech, among several provisions that Barthold said should be rejected by a court as a First Amendment violation.

But the package of bills the governor is promoting is positioning him as a fighter for conservative causes, willing to take on entities often targeted by Fox News and other outlets, Barthold said.

“He certainly is doing good politics, but I don’t mean that as a compliment,” Barthold said.  Ingoglia, though, defended the governor’s stance.

“Anytime that you govern the way you campaign, where you are standing up to big behemoths like the big tech companies and ensure the integrity of the vote, you’re going to be rewarded by the people who believe in those principles and I think the vast majority of Floridians believe that,” Ingoglia said.