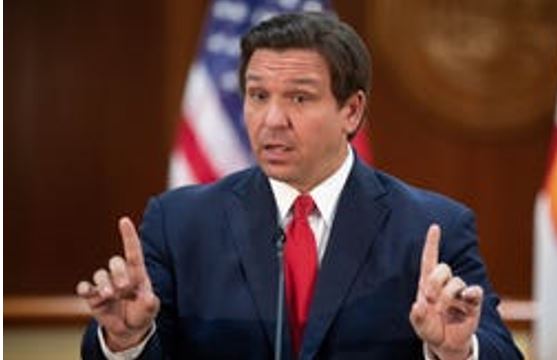 TALLAHASSEE – When Gov. Ron DeSantis ordered Florida’s secretary of state to investigate Facebook, alleging it may have manipulated 2020 elections in the state, he made sure his donors didn’t miss the news.

Forty-eight hours after the Republican governor dispatched Laurel Lee last month on a search for evidence of what he labeled “Big Tech interference,” an email blast went out from DeSantis’ fundraising team to potential contributors.

“Floridians DESERVE to know the level of influence Big Tech has on our elections, and Governor DeSantis will continue to work tirelessly to hold them accountable,” the Team DeSantis blast read, asking those who received it to complete a survey that guided users to another page.

“Help us continue the fight by chipping in today,” the final page read.

With more than $53 million in cash on hand, DeSantis’ re-election campaign is steadily fishing for more money, increasingly using his recent policy actions as bait. This year alone, the governor has raised $51.2 million – 44% of it from contributors outside Florida, records show.

Like the Facebook appeal, many of the governor’s official actions look aimed at a national Republican base which is already eyeing him as a potential White House contender in three years. But the link between DeSantis’ recent policies and their fundraising potential is also drawing scrutiny.

“When policy is closely linked to donations, we should be concerned,” said Sheila Krumholz, executive director of OpenSecrets, a nonprofit organization which tracks the influence of money on U.S. politics.

“It raises questions as to whether a politician supports these policies purely on their merits, or supports them for their usefulness to them personally,” she said.

Not surprisingly, DeSantis’ rivals see it even more starkly.

Still, in the same interview, DeSantis managed to push another hot-button for Republican donors – his opposition to teaching how racism has shaped public life in this country.

“We are also working on a lot of things in the state beyond the governor’s race, we got school board races,” DeSantis said. “I want to make sure people are not supporting critical race theory.”

The policies and fundraising emails issued by DeSantis and his campaign team members follow a similar course: He acts, they ask.

In recent weeks, solicitations have gone out tied to his announcing the state’s lawsuit against President Joe Biden over his handling of migrants at the Mexican border; the governor’s proposal for $5,000 signing bonuses aimed at helping Florida attract law enforcement amid criticism from the Black Lives Matter movement; and his resistance to the federal government’s renewed push in mid-summer for COVID-19 mask regulations.

When DeSantis, speaking to reporters at the Florida Capitol last month, criticized the Biden administration for reducing Florida’s supply of monoclonal antibodies used to treat COVID-19 patients, video of his comments was quickly sent out to donors.

“This is unacceptable,” the email read. “This treatment is bigger than politics.”

Below the statement was the “chip in” button, directing donors to contribute.

Before DeSantis, Florida governors have drawn criticism for using state-owned planes to attend events of a political nature, although his predecessor, now U.S. Sen. Rick Scott, avoided that risk by selling the state’s air fleet and traveling on his own jet.

But the one-two punch of policy pronouncement followed by a fundraising pitch is emerging as a signature of DeSantis’ leadership style.

DeSantis spokeswoman Christina Pushaw said the governor’s office follows the law and does not coordinate with fundraising activities.

“The state office cannot coordinate with ‘Team DeSantis’ to engage in political activity,” she said. “But any entity can send fundraising emails that are inspired by an elected official’s public statements and policy actions. Usually, these fundraising appeals come soon after the official’s public actions.”

Pushaw attempted to equate fundraising by his opponents to the governor’s approach. But Crist and Fried have sent fundraising appeals inspired by DeSantis’ actions – not the policies they’ve put in play through their own official actions.

“Any political group is free to reference the governor’s official statements and actions in their fundraising and campaign materials,” Pushaw said. “This does not constitute coordination.”

DeSantis’ fundraising tied to Biden’s immigration policy both preceded and followed the state’s late-September lawsuit that claimed it will cost Florida millions of dollars and will spur the entry of drugs and undocumented migrants into the state.

In July, DeSantis and Moody went to the Texas-Mexico border, where the governor ultimately dispatched more than 250 state law enforcement officers with the stated mission of helping Texas stem the influx of migrants and drugs.

The Florida taxpayer-financed force stayed several weeks and reported 9,171 contacts with migrants at the border.

“The deployment of Florida law enforcement to Texas was state business, and the governor’s trip to the border was official,” Pushaw said. “There was no political element to the deployment.”

But Ben Wilcox, research director for the government watchdog Integrity Florida,  acknowledged that a trend appears to be developing: The introduction of policies that carry a distinct political tinge.

“It seems like we are seeing a continued blurring of the lines that are supposed to separate your campaign efforts from what are your official, public duties,” Wilcox said.

Pushaw said there is no blurring.

“Gov. DeSantis uses state resources to do what’s right for Floridians, because that’s what Floridians elected him to do,” she said.

Yoonserk Pyun, a data journalist with USA Today Network-Florida, contributed to this report.