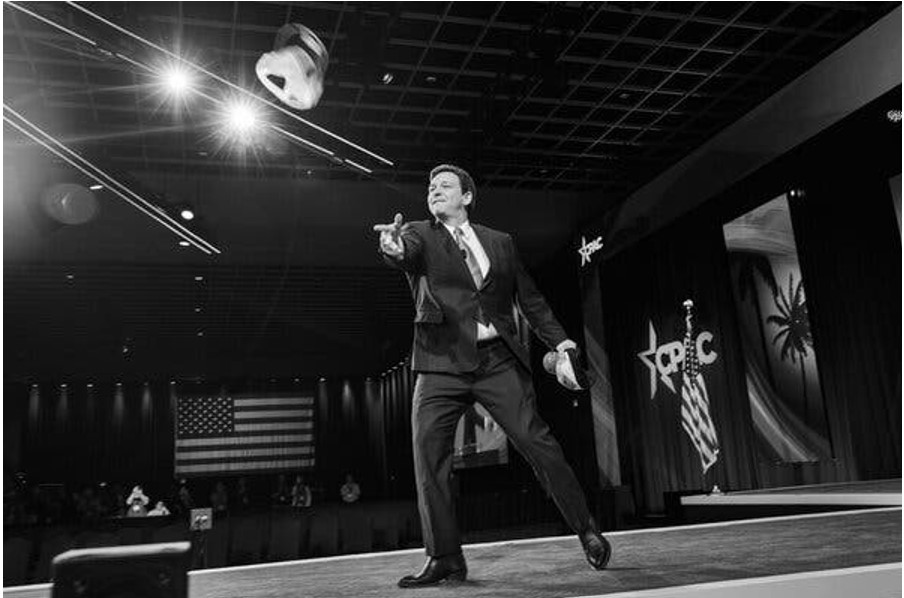 Gov. Ron DeSantis hasn’t said he’s running for president, but Florida Republican legislative leaders are considering making it easier for him to do so anyway.

Gathered in Tallahassee on Tuesday, these leaders said they are open to revising a Florida law requiring the governor to resign his position if he runs for president. The talk in Tallahassee apparently did not go unnoticed in Trump world, where the Make America Great Again political action committee (PAC) emailed a list of polls showing former President Donald Trump leading a potential field of GOP White House rivals.

Current Florida law requires state or local officials seeking federal office to resign at least 10 days before qualifying for the federal position if the two terms would overlap.

The state Legislature’s top Republicans, House Speaker Paul Renner and Senate President Kathleen Passidomo, expressed their support for repealing the law in speaking with reporters Tuesday after incumbent and freshman legislators were officially sworn into office.

Passidomo, of Naples, said in response to a reporter’s question that changing the law would be “a good idea” in making it politically less risky for a sitting governor to seek higher office.

“When you think about it, if an individual who is from Florida — who is a Florida governor — is running for president, I think he should be allowed to do it,” Passidomo said. “I mean, that’s an honor and a privilege.”

DeSantis says “chill out,” but won’t confirm another 4 years as governor

DeSantis has not said whether he will serve a full second term amid widespread speculation about his 2024 plans.

Not conclusively ruling out a run in two years has in turn helped fuel DeSantis presidential talk, although the governor did tell reporters to “chill out” when most recently asked about his plans.

This month, the governor won his reelection bid by a nearly 20-point margin against his Democratic opponent, Charlie Crist. The speculation has been growing since the election, especially after DeSantis handily led Republican wins statewide by wide margins and conservative media, like the New York Post, called him “DeFuture” in a post-election front page headline.

DeSantis also spurred speculation in the only gubernatorial debate when Crist pointedly asked the governor to confirm that he would stay in office for four years. DeSantis, looking uncharacteristically uncomfortable at the podium, refused to answer.

The governor also was a headliner at a Republican Jewish Coalition conference in Las Vegas this past weekend, where former President Donald Trump and former Vice President Mike Pence also spoke.

On the other hand, Trump made his 2024 plans public at his Palm Beach Mar-a-Lago estate last week. That followed Trump’s public attacks against DeSantis on his Truth Social social media platform in which he called the governor “average” and claimed DeSantis only won the election in 2018 because of Trump’s endorsement.

“The Fake News asks him if he’s going to run if President Trump runs, and he says, ‘I’m only focused on the Governor’s race, I’m not looking into the future.’ Well, in terms of loyalty and class, that’s really not the right answer,” Trump said in a Truth Social thread.

The MAGA PAC email said that “poll after poll shows that President Donald Trump is Republicans’ top choice for the 2024 presidential nomination.” The email cited a series of polls all showing Trump with a double-digit percentage point lead over DeSantis and other potential Republican candidates.

Stephany Matat is a journalist at the Palm Beach Post, part of the USA TODAY Florida Network. You can reach her at smatat@pbpost.com.