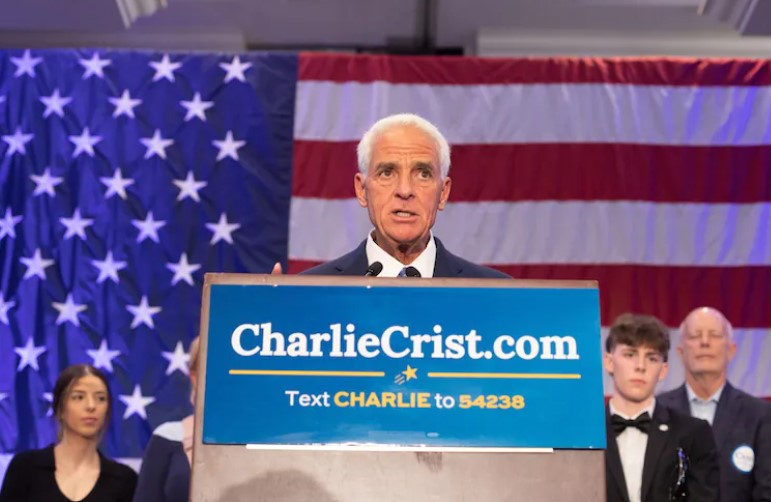 Rep. Charlie Crist (D-Fla.) obliterated opponent Nikki Fried in Tuesday’s Democratic primary for Florida governor. And now Crist, himself a former Republican governor of the state, goes up against the current Republican governor, Ron DeSantis, who has visions of the Oval Office dancing in his head. Just as Lawton Chiles did with his 1994 defeat of Jeb Bush for the same office, Crist has a rare opportunity to knock a would-be presidential candidate off track. And it looks like he has every intention of doing so.

Crist, a mild-mannered moderate on the trail, came out swinging at DeSantis in his victory remarks: “Our fundamental freedoms are literally on the ballot. … A woman’s right to choose, on the ballot. Democracy, on the ballot. Your rights as minorities are on this ballot.” He told the crowd that DeSantis wants to be president, but if Crist wins, “that show is over.”

Crist went on to call his race “the most consequential … in the history of the state,” saying he hardly recognized today’s “extremist” Republicans, who “want to turn back the clock on our freedom.”

Crist made clear that he’s going to run as a uniter, while DeSantis schemes to reduce access to the voting booth. Crist vowed to make it easier to vote (saying Election Day should be a holiday), as well as to sign an executive order protecting abortion rights and reinstating Hillsborough County State Attorney Andrew Warren, whom DeSantis suspended for declaring he would not prosecute women seeking an abortion. Crist also went after DeSantis for refusing to call out GOP Lt. Gov. Jeanette Nuñez for suggesting Cubans “illegally” in the state should be bused to Delaware.

Crist’s attacks on DeSantis were unsparing: “He’s abusive. He is a bully. … He’s dangerous.” Crist accused the governor of imitating the worst political authoritarians around the globe and bashed him for refusing to call out his flag-waving neo-Nazi supporters.

Crist might consider bringing Rep. Liz Cheney (R-Wyo.) into the state, or at least running an ad featuring her slam against DeSantis. (“DeSantis is somebody who is, right now, campaigning for election deniers,” she said in a recent ABC interview. “That is something that I think people have got to have real pause about. … Either you fundamentally believe in and will support our constitutional structure, or you don’t.”)

Crist sounds as though he is running against former president Donald Trump — and in a sense, he is. He’s battling a mini-Trump who adopts the same inflammatory slogans (“woke” seems to be his favorite word), and who also refuses to unequivocally denounce white nationalists. Like Trump, DeSantis uses critical race theory to crank up White resentment, even signing into law a litigation behemoth for suing teachers who dare to accurately teach American history. To all that, Crist declares: “Enough!”

Florida remains a red-trending state. DeSantis has a boatload of money. But this does not mean DeSantis will waltz to victory. In making DeSantis’s bullying and violations of freedom the central issue, Crist is trying out a playbook that may be useful against any MAGA Republican nominee in 2024. If Crist pulls an upset, or even comes close, Republicans might decide DeSantis is not a good bet for 2024.