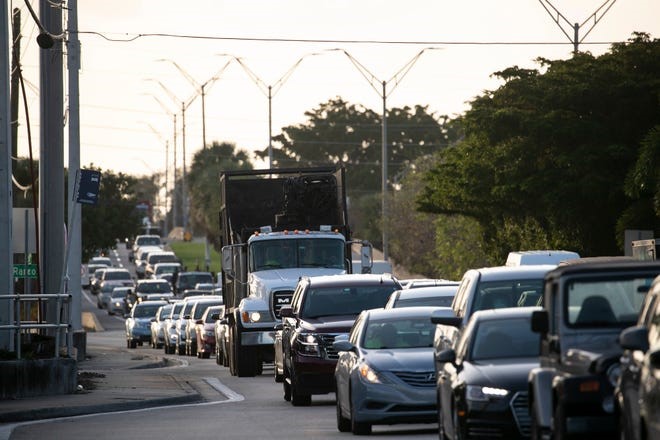 Editor’s note:  Charlotte County comes in 5th amongst this ranking, worse than Sarasota County. The full report is available here.

Coastal urbanization is the top factor driving pollution from the Tampa Bay area south to Collier County, and the water quality in many of those counties declined over a recent three-year period.

Those were some of the findings from a report released last week by a local environmental group.

Calusa Waterkeeper published an assessment of Southwest Florida waters that is based on Florida Department of Environmental Protection records and databases, and the report concludes that, for the most part, Southwest Florida’s ailing waterways are not getting any cleaner.

“We wanted a regional outlook, so we had seven coastal counties and we added Glades and Hendry because they’re in our Calusa Waterkeeper project boundary, and it kind of compares coastal areas to inland areas,” said Calusa Waterkeeper John Cassani. “The land uses contrast, so the coastal counties are predominately urban growth and Glades and Hendry are predominantly agriculture. Manatee (County) has a combination of urban and ag lands, so it’s a good mix of uses and a variety of waterbodies involved.”

Cassani said the report focuses on water quality from 2018 through 2020.

The assessment focuses on what are called impaired water — creeks, rivers, lakes and bays that have been verified by DEP as having too much fecal bacteria or even copper.

Excess nutrients from farm fields, stormwater drainage systems and urbanized areas are the top pollution sources in many of Southwest Florida’s most troubled waterways.

Some urbanized areas are showing improvements in water quality trends simply because they had reached development capacity. Waters aren’t improving there, but the rate at which waters are being degraded has slowed.

“For the seven coastal counties, it’s quite apparent the accelerated growth is enforcing the trend in impairments,” Cassani said. “Pinellas and Hillsborough are nearing buildout, so about the only direction they could go was to decrease the number of impairments.”

Further south, counties are less developed, but they are growing.

“The other counties are growing fast, and that’s what I believe is driving impairment,” he said. “The other connection is it looks like the fecal bacteria factor relates to human growth and sewage infrastructure. It’s affecting people’s health and it’s affecting their property value; and we want to help (the public) understand what might be driving those trends.”

This type of analysis should be a regular part of planning when considering growth in an area that is in ecological decline, the report says.

“Tracking verified impairment should be considered a valid tool for measuring overall water quality but may only be the ‘tip of the iceberg’ in a more comprehensive impairment context as other (identified waterbodies) are typically in the ‘pipeline’ for impairment verification,” the report reads.

Collier, Manatee and Hillsborough showed the most growth among the nine counties, with Lee County coming in fourth on that list.

Impervious surfaces cause waters to flow quickly from one place to another and can take the form of anything from a parking lot to a drainage network.

The report compares counties to each other and should be used as a planning tool to help guide future growth management decisions, the report says.

“Assessing water quality impairment on a geo-political basis, such as a county, is relevant in that most state mandated restoration programs, such as Basin Management Action Plans, are implemented primarily by local government stakeholders,” the report says.

Marisa Carrozzo with the Conservancy of Southwest Florida said the report shows that our region needs a variety of answers to what have become common problems.

“A couple of things that stuck out to me were the prevalence of nutrients pollution and bacteria contamination; and looking at the higher prevalence, especially in the agriculture dominated land use areas but for the coastal areas,” she said. “It highlights that we need to tackle these sorts of pollution in a holistic manner.”

Carrozzo said some of the issues have been ongoing for a decade or more, and that Florida needs to update stormwater management criteria to help fight pollution.

“We need to look at urban stormwater issues, and the standards have been out of date for well over a decade,” Carrozzo said. “So as we’re seeing this increase in urbanized areas, we’re falling further behind in reducing the nutrients when new development is going in.”