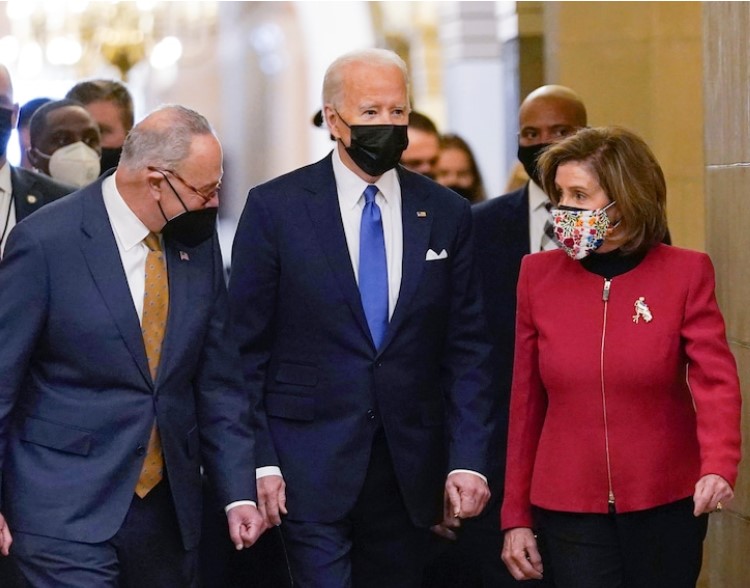 Next Tuesday evening, on March 1st, President Biden will deliver his State of the Union address, to which all members of Congress — but not their guests — have been invited in accordance with Covid-19 policies. State of the Union speeches are notorious for their excessive length and poor construction; no matter how hard the president and his speechwriters try, the addresses invariably devolve into laundry lists of accomplishments and laundry lists of agenda items. A week later, no one can recall a single line.

Biden will speak at a perilous time. War seems unavoidable in Europe. Inflation is raging. The Republican Party clings to the “big lie” and systematically attacks voting access while setting the stage to sabotage vote counting. Perhaps a different sort of speech is needed, with fewer items and more depth.

The president should begin with a reminder where we were a year ago. The country had just endured the worst violent insurrection since the Civil War. The vast majority of Americans were unvaccinated, many schools were closed or remote, and the economy was at a standstill. In other words, some perspective is badly needed. With a booming economy (6.6 million new jobs), a large majority vaccinated and able to return to normal life, kids back in schools and functional government restored while prosecutors and the House have begun to investigate and hold the insurrectionists accountable, the improvements are stunning — and too easily forgotten.

Second, Biden needs to spend considerable time explaining what the American Rescue Plan did (who got aid, what would have happened without it) and what the infrastructure legislation will produce (including major strides in green energy). The White House fails to appreciate how little the American people know about what was delivered. Biden should not dwell on or even use the phrase “Build Back Better.” It’s kaput, and Biden’s insistence on talking about it reminds voters of his failures and of the giant spending plans that made many voters nervous.

It is in this context that Biden should level with Americans about inflation. We have inflation because we pumped lots of money into the system during the coronavirus pandemic — to keep businesses from failing, people from starving, kids from suffering in poverty, etc. — while production ground to a halt. Saving people from misery was not wrong; now, however, the Federal Reserve must do its job to contain inflation. Biden has done his part — getting the economy back up and running to meet demand. He can do some small things (e.g., supply chains) but inflation will abate over time. Until it does, he can do everything to pump up production (as the Competes Act does) and can police monopolistic practices and price gouging. He should empathize with voters but project confidence that things will improve in the months ahead.

Third, Biden should recognize that we have reached an inflection point on the pandemic. He can take the victory lap for more than three-quarters of Americans receiving at least one shot, for getting schools back open and for rolling out effective antibody treatments. With few exceptions (e.g., the youngest kids, those with compromised immune systems) the people who remain at risk of death or serious illness are the willfully unvaccinated. Biden should urge them to get on board because the rest of us will be returning to normal.

Fourth, Biden should be candid: The state of our democracy remains frightfully fragile. He needs to explain the assault on democracy by authoritarians and would-be-authoritarians and debunk their attacks (e.g., democracies can’t function, there are quick fixes only a strongman can impose). He then needs to be clear that the Trumpist movement is an authoritarian cult that has spread a web of dangerous lies about everything from the 2020 election to covid-19; winked if not encouraged political violence; and sought to undermine the premise of our democracy that every legal voter should be able to cast their ballot and have their vote counted. He should call out Republicans running on the “big lie,” pushing (still!) to decertify elections, politicizing voting administration and refusing to protect election officials. The president should pledge to do everything in his power to enforce existing voting laws, prevent fraudulent practices and protect election workers. There is no higher priority than protection of ballot access and election credibility.

In this context, he should talk about Ukraine — why it is vital to prevent authoritarians from changing borders by force, dictating other countries’ choices and upsetting international order. Just as we must defend our democracy at home, we must assist Ukraine in its fight for survival and force Russia to pay a terrible price for its unprovoked and unconscionable aggression.

Finally, Biden needs to pick a few items — not the full Build Back Better laundry list — to pursue going forward. Add to that list crime-prevention measures. Democrats must show voter they care about their safety and are committed to doing what they can to make certain that well-trained and paid cops are on the job.

And that’s it. Keep the speech under an hour. Remind voters where we came from and how our economy has improved. Acknowledge and promise a downturn in inflation. Take a victory lap on Covid. Address the crisis in democracy here and abroad. Then pick a couple of to-do items. If he can do that, this State of the Union will be among the better ones in recent memory.