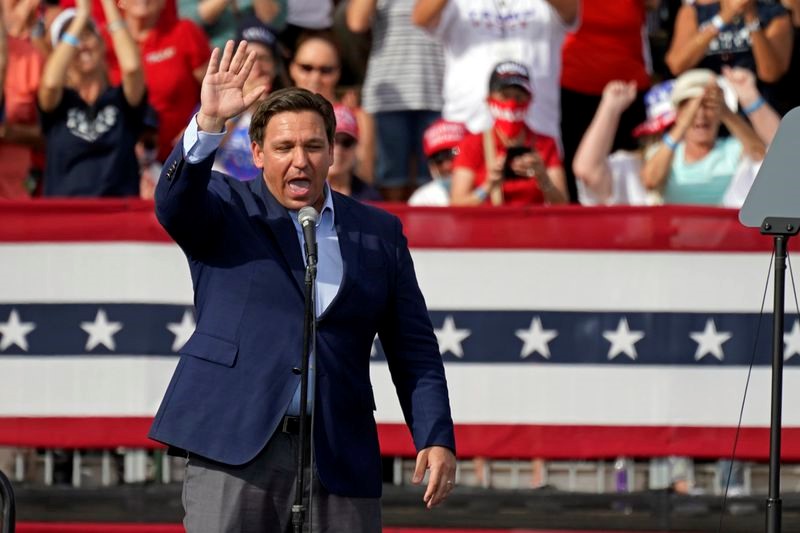 Extract from the politico.com newsletter, Dec 16, 2020

Slow shuffle — Florida Republicans, including Gov. Ron DeSantis, appear to be grudgingly moving closer to accepting that Joe Biden will be America’s next president.

Recognition of reality — Attorney General Ashley Moody — who joined 16 other attorneys general in an unsuccessful effort to get the election results overturned in four battleground states — also sounds as if she is headed in that direction even as she tries to defend her actions to withering criticism. “I believe we will have a peaceful transition of power as we have had historically and the court process adds to that and I’m proud about that for our country,” Moody told a small group of reporters following Tuesday’s Cabinet meeting with DeSantis.

Not a big deal? — When asked point blank about her decision to support the long-shot lawsuit from the state of Texas, Moody framed her decision several times as merely asking the U.S. Supreme Court to “take jurisdiction” of the case rather than acknowledging the sweeping remedy being proposed by the lawsuit. She said having the Supreme Court — which quickly threw out the Texas case — review the lawsuit “would bring trust and faith in our electoral process, not just for this election but for future elections… Obviously I’m disappointed they didn’t [accept jurisdiction] but I respect the Supreme Court’s decision.” Moody said several times the legal effort was about whether or not elected officials — and not the Legislature — could alter procedures in federal elections. When it was pointed out that had also happened in Florida, Moody brushed aside the question.

Internal decision — Several news stories have detailed how President Donald Trump tried to persuade top Republicans in several states to try to overturn the election results. But Moody, who is up for re-election in two years, also maintained that her decision to join with other states filing an amicus brief in support of Texas’ effort was done without anyone from the president’s campaign or outside elected officials urging her to do so.

“DeSantis begins to acknowledge Biden win even if he has trouble saying it,” by POLITICO’s Gary Fineout: Florida Gov. Ron DeSantis, a top ally of President Donald Trump, all but acknowledged on Tuesday that Joe Biden won the presidential election even if he appeared to have difficulty saying it out loud. DeSantis’ attempt to deflect answering a question about Biden’s win came the same day that Senate Majority Leader Mitch McConnell directly acknowledged Biden as president-elect a day after he officially won 306 electoral college votes.

A meandering reply — When asked directly by reporters if he accepted a Biden win, DeSantis said, “It’s not for me to do. But here’s what I would say: Obviously we did our thing in Florida. The college voted. What’s going to happen is going to happen.” DeSantis added there was a “lot of frustration” for Trump supporters because he said the president’s opponents did not accept Trump as president during the preceding four years. “I mean Hillary [Clinton] the last week of the election was saying [Russian President Vladimir] Putin stole it,” DeSantis said. “And I just think that’s left a lot of people really frustrated with how it’s going to go. But we’re going to do the job for Florida. We’re going to push ahead. We’ll work with whoever we need to be able to do right by the state of Florida.”

“Three quarters of states will elect governors in the next two years. Here’s a field guide,” by POLITICO’s Steven Shepard and Sabrina Rodriguez: If Trump’s victory in Florida is any indication, Gov. Ron DeSantis — a Trump ally — is well positioned to win reelection. DeSantis will also be on the ballot with Sen. Marco Rubio — a popular Florida Republican — and other Republican incumbents for statewide positions. And while Democrats are still reeling from their losses in the state, the party could see a competitive primary given DeSantis’ controversially less restrictive response to the pandemic and close ties to Trump. State Agriculture Commissioner Nikki Fried, the only statewide elected Democrat, has long been expected to run against DeSantis — and state Rep. Anna Eskamani and Reps. Stephanie Murphy and Val Demings are often mentioned as potential candidates, too. Former Rep. Gwen Graham, who ran in 2018 but fell short in the primary, is also considering the race.