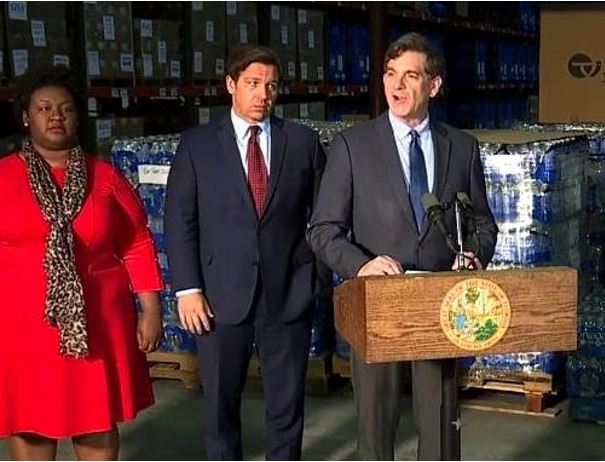 Florida now has the largest number of cases in the United States of the troubling new COVID strain that emerged in the United Kingdom, where it has been wreaking havoc as the virus spreads rapidly.

As of Monday, Florida has 46 of the so-called B.1.1.7 variant cases, more than any other state, according to the federal Centers for Disease Control and Prevention.

Overall, the CDC has identified 122 of the variant cases in 20 states, up from 15 states this weekend.

At that time, CDC reported 22 cases of the variant in Florida, but the cases jumped to 46 by Monday, and the public remains in the dark.

(The cases identified are based on a sampling of specimens and do not represent the total number of B.1.1.7 cases across the nation, according to the CDC.)

For at least two weeks now, neither Gov. Ron DeSantis nor Florida Surgeon General Scott Rivkees have sent word to the public about the troubling strain. There haven’t been any news conferences, press releases, Facebook and Twitter messages related to the troubling B.1.1.7 variant during the COVID pandemic in Florida.

Elsewhere, other states have been doing many of those efforts to alert the public.

Of concern is that the new more, transmissible COVID-19 variant could become the dominant strain by March, triggering a surge in cases across the country, the CDC has warned.

“A higher rate of transmission will lead to more cases, increasing the number of persons overall who need clinical care, exacerbating the burden on an already strained health care system, and resulting in more deaths,” according to a recent CDC report. News outlets have used words such as “alarm” and “dangerous” in terms of discussing the more contagious variant.

“The increased transmissibility of this variant requires an even more rigorous combined implementation of vaccination and mitigation measures (e.g., distancing, masking, and hand hygiene) to control the spread…These measures will be more effective if they are instituted sooner rather than later to slow the initial spread of the B.1.1.7 variant,” the CDC report said.

“Increased transmissibility also means that higher than anticipated vaccination coverage must be attained to achieve the same level of disease control to protect the public compared with less transmissible variants.”

The Florida Department of Health on Dec. 31, 2020 — New Year’s Eve — tweeted about the first case of the more contagious strain of COVID-19. The B.1.1.7 case involved a young man in his 20s in Martin County, north of Palm Beach County. Health officials and lawmakers held a press conference Jan. 2 in Martin County about the variant case, but neither the governor nor the surgeon general participated.

Ever since then, state officials have been mum about the troubling new cases that can spread more easily and make more people ill.

Meanwhile, state health officials and DeSantis, who is focusing almost solely on vaccines, should be considering measures to control the new variant, according to the CDC. Measures could include a statewide mask mandate, which DeSantis has been against.

The Phoenix has requested details from the state health department about the variant cases, but thus far, no response.

Knowing at least where the new COVID variant has emerged in a particular county could be helpful in making decisions about the opening of schools, restaurants and businesses.

The CDC has a national map of the variant cases that you can find here.