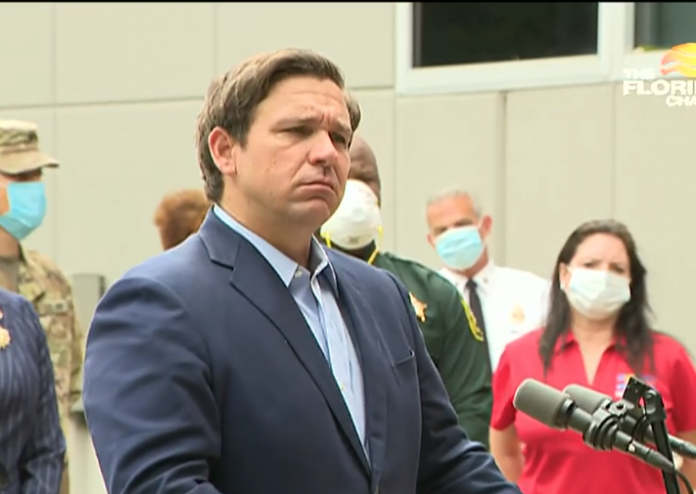 As new daily cases of COVID-19 hit record highs across the nation this week, Florida remains an outlier by not requiring its people to wear face masks in public.

Florida is one of just 16 states that don’t impose a statewide mask mandate.

The others are Alaska, Arizona, Georgia, Idaho, Iowa, Mississippi, Missouri, Nebraska, New Hampshire, North Dakota, Oklahoma, South Carolina, South Dakota, Tennessee, and Wyoming, according to recent surveys by the Association for the Advancement of Retired Persons (AARP), CNN, and the Florida Phoenix.

Thirty-four states – with Utah, the latest, joining on Monday – plus Puerto Rico and the District of Columbia impose mask mandates in all public places within their borders.

Sen. Lori Berman, a Palm Beach County Democrat, said Tuesday she will continue to push for mask mandates but does not expect Florida Gov. Ron DeSantis, a Republican and fervent Trump ally, to relent in his opposition to them.

DeSantis lifted all statewide COVID restrictions on Sept. 25 and banned local governments from enforcing their mask mandates against individuals. (Municipalities may continue to enforce masking requirements among businesses and organizations.)

“Our governor has been on the wrong side of this from the beginning. I wish he would heed the experts,” Berman said. “Look at Utah. They just imposed a state mandate yesterday [after a 15 percent increase in cases]. I hope we don’t have to get that bad before our governor will act.”

Berman noted the irony of Florida’s Republican-controlled Senate and House of Representatives convening in their first legislative sessions next week under requirements that they wear masks, test negative for COVID-19, maintain safe distances, and submit to fever checks.

“The things we’re doing in the Legislature are not being required at the top of the state for all other Floridians,” Berman said.

Most of the non-masking states were won by President Trump in the general election, with the exceptions of Arizona (won by Democrat Joe Biden) and Alaska and Georgia, still undecided one week after Election Day.

In the Southeast, where Trump generally prevailed, four states impose statewide mask mandates – those being Alabama, Arkansas, Louisiana, and Texas. Again, Georgia, which does not mandate the wearing of masks in public, and North Carolina, which does, were too close to call for either candidate.

President-Elect Joe Biden, in a national address Monday, called on all 50 states to adopt statewide mandates, saying it is the most successful and cost-effective way to hasten an end to the coronavirus pandemic in the United States.

While Tropical Storm Eta has moved closer to Florida, Gov. Ron DeSantis has not made public appearances for several days, and his office did not respond to requests for comment on Biden’s call for mask mandates.

DeSantis’ last major appearance was on a Nov. 5 Fox network TV show, when he urged Republicans in pivotal states to call on their legislators to cast their electoral-college ballots for Trump regardless if their popular votes went to Biden.