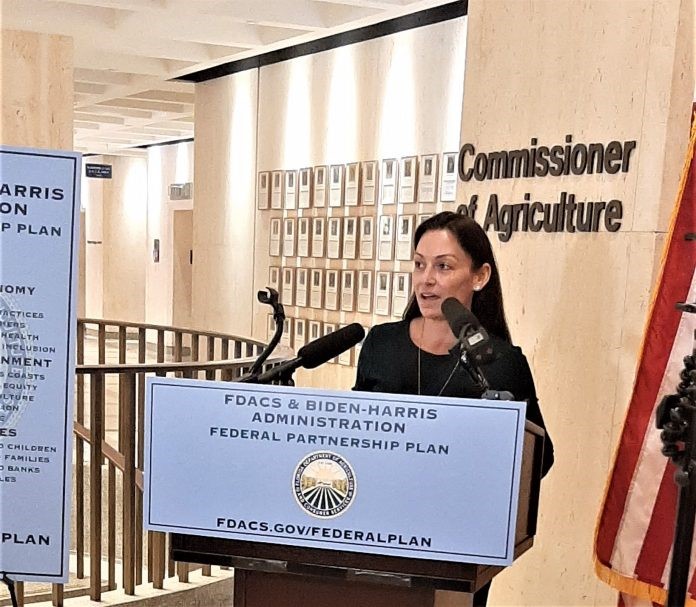 Nikki Fried, Florida’s only statewide-elected Democrat serving on the state Cabinet, is pushing myriad initiatives and pairing up with the Biden Administration now that Democrats control the Congress and the White House.

With President Trump out, the shift in political parties controlling the federal government will take on Democratic-led initiatives.

Already, Republican Gov. Ron DeSantis faces a difficult period and is trying to adjust to the new administration, particularly over priorities for COVID-19 vaccine distribution in the state.

But Fried, who is also the state’s Agriculture Commissioner, wasted no time in building a relationship with President Joe Biden’s administration and federal agencies.

She said on Tuesday that her department has already been in talks with the Biden-Harris administration to address issues surrounding climate change and energy, health care, education, racial equality, school nutrition and more.

“Since November, we had a number of productive communications with the Biden-Harris transition team,” Fried said during a press conference in the state Capitol. “We have gone through some of these issues with them.”

Fried encouraged other state officials to follow suit, saying it is crucial that “state leaders work closely with this new administration.”

“We have a lot that needs to get done in Florida. And we need a strong partnership with the president, the administration, and the federal government to deliver results to Floridians,” she said.

Fried unveiled an extensive partnership plan between the state, the Department of Agriculture and Consumer Services, the Biden administration and federal agencies.

“Partnerships are a two-way street,” she said.

She also declared a push for legalizing marijuana for recreational use but said it is likely to face difficulty. DeSantis and “top leadership” in the Republican-led Florida Legislature, Fried said, “are not in favor of legalization.”

Fried’s “Keeping America and Florida Growing” is a 30-page federal partnership plan highlighting nearly 40 initiatives for Florida. Those include policies for farmers, addressing climate crisis, expanding voting rights, assisting families and children with access to nutrition, and increasing diversity and inclusion. You can see the plan.

The plan marks Florida’s first public plan in collaboration with the Biden-Harris Administration. Other initiatives laid out in the plan are strengthening rural communities, protecting consumers from fraud, and expanding voting rights.

At the press conference, Fried concluded with a message to President Biden and Vice President Kamala Harris: “On behalf of the state of Florida…we support you, we are here to partner with you and we are ready to get to work.”

Fried said in the message: “In Florida, federal funding makes up 33% of our state revenue, more than most states. That’s why we are pursuing a strong partnership with the federal government to help us face these issues properly.”

A message from our Charlotte Dems Chair on Hispanic Heritage Month

Joe Biden’s response to my request to address gun violence

Joe Biden’s response to my request to protect voting rights

A message from our Charlotte County Democrats Treasurer