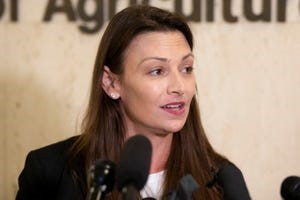 After a surprise 2018 win that made her a leading Democratic voice in Florida and a pandemic spent as Gov. Ron DeSantis’ chief antagonist, Agriculture Commissioner Nikki Fried filed Tuesday to try to unseat the governor in 2022.

Later in the day, Fried released a campaign video via Twitter in which she denounces a “rigged system” that that’s “corrupt” and “antidemocratic.” She acknowledges the campaign will be difficult but adds that few expected a Miami Democrat to win election as agriculture commissioner.

As a young, female elected official who has made pro-marijuana policies central to her political brand, Fried would not be the typical contender for statewide office in Florida, and she’s leaning into that by pitching her potential campaign as “something new.”

“I’m unafraid. I’m tested. I’m ready,” Fried said, speaking directly into the camera in a two-minute video launching her campaign. “And I know you’re ready for something new, too.”

Without mentioning DeSantis, Fried said that she was read to “break the rigged system in Florida,” which she said was “anti-democratic,”

Fried is the second Democrat to launch a campaign for governor after U.S. Rep. Charlie Crist announced his campaign last month.

Fried narrowly won the agriculture commissioner job in 2018 and is the only statewide elected Democrat.

A sharp critic of DeSantis throughout the pandemic, Fried has been signaling for months that she plans to run for governor.

Fried, 43, is an attorney and former marijuana lobbyist.  A Florida medical marijuana card-holder who uses medical cannabis to treat a sleep disorder, she is likely to emphasize marijuana legalization in her campaign.

Previous coverage: Charlie Crist announces his third campaign for governor of Florida, second as a Democrat

Fried is the only sitting statewide officeholder representing the Democratic Party but her 2018 victory over Republican Matt Caldwell was exceptionally narrow — the margin was 6,753 vote out of more than 8 million cast, according to the Division of Elections.

In her video, the former medical marijuana lobbyist includes marijuana legalization as a priority, in addition to environmental protection, expanded access to health care, smaller class sizes, economic opportunity, and access to justice.

“We can build a state that gives power back to you; an economy that rewards hard work with prosperity, not poverty or stagnation,” Fried says,

Fried’s Florida Consumers First PAC has raised more than $780,000 since it resumed fundraising in earnest in November, overwhelmingly due to small donations. The committee did attract several substantial donations from other PACs, however, including $128,500 from Equal Justice P.C., chaired by Fort Lauderdale criminal-defense and election-law attorney Jason Blank. Another Blank-affiliated committee, Citizens for United Florida, gave another $80,750.

By contrast, the Friends of Ron DeSantis committee raised more than $24 million during that same period, including nearly $14 million during April alone. The Friends of Charlie Crist organized only last month and has yet to file campaign financial disclosure information.