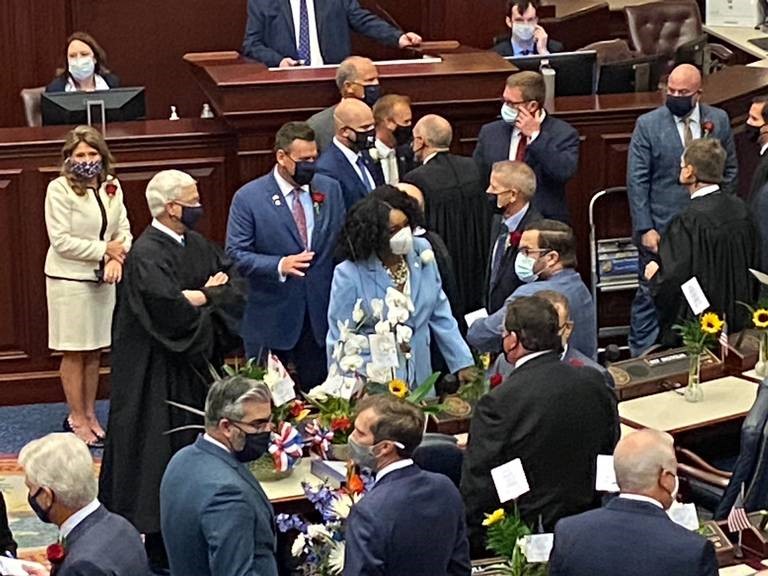 For a whole year, as Floridians suffered and died by the tens of thousands from COVID-19, Florida’s government routinely kept the public from seeing detailed information about the course and intensity of the pandemic, often until the trend line had changed to better match the governor’s sunnier version.

That disgraceful behavior by a state known for its broad public-records laws is detailed in a story and accompanying timeline published by the Miami Herald and Tampa Bay Times last week. That important reporting shows that Florida’s government spent a year stonewalling, obfuscating and evading requests for information about such vital matters as the number of COVID deaths recorded by medial examiners’ offices, details about contact tracing to see where transmission was occurring and which eldercare facilities had seen outbreaks among staff and residents.

Mounting such a pervasive and sustained attack on the state’s public-records law in the midst of a tragedy that has killed 31,000 people and infected more than 1.9 million in the state should outrage and offend every Florida taxpayer.

In some ways, this is no surprise. Under former Gov. Rick Scott, now Florida’s junior senator, the state became increasingly hostile to open- government principles. But current Gov. Ron DeSantis has expanded on Scott’s antagonism, chipping away at the public’s right to know what its government is doing — just when Floridians most needed to rely on their leaders on life-or-death issues. That is inexcusable.

Starting last spring, when the coronavirus was taking hold in Florida, and continuing to today, the state slow-walked requests to see a wide variety of information relating to the pandemic.

Let’s be clear: The information we’re talking about doesn’t fall under the umbrella of national security or nuclear codes, exceptions any thinking person would agree are reasonable. No, we’re talking about the kind of information that might be critical to helping Floridians gauge the risk to themselves and their families in a pandemic — no small thing at all.

For example, the state attempted to block the release of COVID death records, information used to determine how severely Florida had been hit. The DeSantis administration ignored public-records requests for specifics of contact tracing in Florida — the government-financed program that is supposed to help cut down on transmission by notifying people when they’ve been around someone who tested positive. And Florida’s government wouldn’t disclose the number of deaths at specific eldercare facilities, something that families of vulnerable seniors surely should be able to know.

In a particularly egregious and revealing moment in April, the state refused requests by the Herald and family members of people in eldercare facilities to give them information that the state collected identifying which facilities had staff and residents who tested positive for COVID. When the Herald’s law firm, Holland & Knight, drafted a public-records lawsuit seeking the information, the governor’s office tried to stop the suit by pressuring the law firm, which does a lot of work for state agencies.

It worked. Holland & Knight backed down, and the Herald had to find another law firm to file the suit.

Florida’s Government-in-the-Sunshine Law, a tradition of openness that includes a constitutional amendment passed by voters in 1992, is a series of statutes intended to give the people access to the meetings and records of the government they elect and pay for. But the Herald/Times report, along with additional proposed exemptions now before the Legislature, show in no uncertain terms that these are dark times for the Sunshine Law.

Pamela Marsh, president of the Florida First Amendment Foundation, said governmental openness and accountability in the state have “gotten worse in every way.”

From exorbitant fees for residents to obtain public records to mothballing requests until threatened with a lawsuit, the state has tried to prevent access to information that rightfully belongs to the public. Worse, those tactics often have succeeded.

“Transparency has gone downhill,” Marsh told the Miami Herald Editorial Board. “It got bad under Rick Scott when he was governor, but I do think it’s gotten worse under this administration.”

There already are 1,159 exemptions to the Sunshine Law — and more in the works, if some of our state legislators have their way. It’s a grim prospect, especially as Sunshine Week — dedicated to promoting open government across the country — is about to be observed March 14-20. For example, there are bills this year that would make voter-registration records secret, hide the home addresses of members of Florida’s Cabinet and Legislature (making it hard to determine whether a lawmaker lives in his or her district) and keep secret the names of candidates applying for the presidency of a university or college.

Some public-records exemptions may sound reasonable on their surface — until you look deeper. Marsy’s Law, passed by voters in 2018, was part of a national push to protect crime victims from harassment by their attackers, among other things. But law-enforcement agencies in Florida are now using it to protect the names of cops after they use force, as USAToday reported.

Why does the state’s open-records law matter so much? Because information is power.

The government works for the people. The people get to decide what the government does. And the only way for the people to do that is to have free and open access to government records and meetings. There have to be exceptions to that basic democratic premise, of course, but they should be, as noted in the Sunshine Law, as narrow as possible and fulfill a public need.

Yet in this monumental, yearlong struggle with COVID, the government of Florida has tried — not even subtly — to keep pandemic information away from the people. Has the state paid too much for contact tracing? Was it effective? We Floridians don’t know — but we should.

In the governor’s annual State of the State address Tuesday, he cited his pandemic response in a speech that sounded more like a campaign rally for his reelection next year than a somber address in the midst of possibly the worst crisis the state has ever faced.

“Our nation and our state have endured a tumultuous year. Floridians have responded in ways that would make our founders proud,” DeSantis said. “Because of that, the sun is rising here in Florida, and the Sunshine State will soon reach new horizons.”

That’s an awfully optimistic vision when cast — as it must be — against the backdrop of 31,000 deaths. But maybe Florida did avoid the worst of the pandemic. Maybe our government and governor rose to the occasion and functioned at their best in a situation terrible beyond imagination. Without transparency and accountability, we’ll never know.

Image Background: Florida legislators open their 60-day legislative session on Tuesday with strict COVID-19 protocols that have kept the public away and required all members to be tested, keep their distance from one another and wear masks.