Florida hits 1 million coronavirus cases. How did we get here? 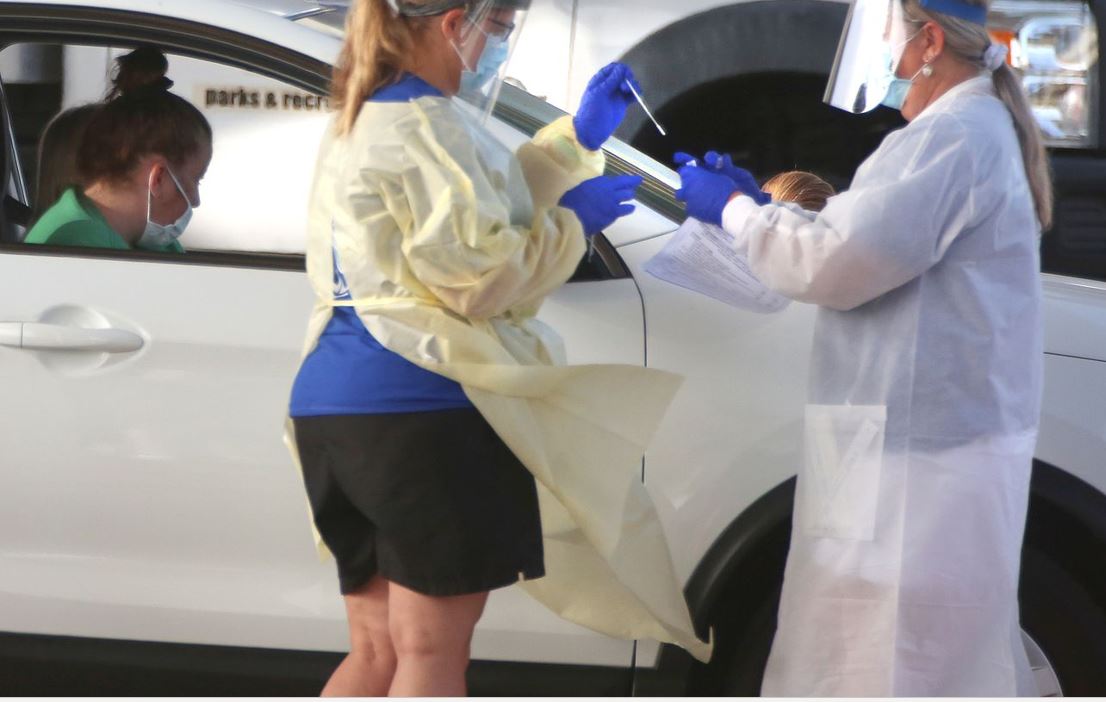 One million coronavirus cases. Florida is on track to hit that mark, the most staggering milestone in the virus’ deadly spread across the state. On Friday, the total stood at 979,020, at a time when the toll hovers around 8,000 cases a day.

In a year that has felt like a decade, and with “pandemic fatigue” a regular part of the lexicon, it can be hard to recall how we got here. But jog your memory: Remember when there were just a handful of confirmed cases? When testing wasn’t just a drive-through away? When people told each other, “If we can just make it through April …”

It all started just nine months ago:

It was going to happen. Florida made it more than a month without a coronavirus diagnosis after the first one in the U.S. — someone who had traveled to China and was diagnosed in Washington state on Jan. 20 — but the virus was in America, spreading more each day. On the first day of March, a Sunday night, Gov. Ron DeSantis announced the news: Two people had tested positive, one of whom turned out to be a Tampa woman, the other a Manatee County man.

DeSantis said in a press conference the next day in Tampa that the risk to the public was low, and to many Floridians, the virus seemed far away, still embodied by runs on hand sanitizer and wet wipes rather than death tolls. Tests were hard to come by, even for those who had reason to believe they’d been exposed.

But tens of thousands of cases had been reported around the world, and thousands more had died. Within a week, Floridians started dying. For weeks, DeSantis would resist calls to issue a stay-at-home order.

RELATED: A tribute to the Floridians taken by the coronavirus

The daily counts of new cases came in single and double digits at first, then by the hundreds. Community spread meant the virus was circulating rapidly; increased testing made that easier to see. Hospitalizations increased sharply. New cases were being announced by the thousands as the calendar flipped from March to April, with 7,000 cases reported in a week that culminated with Florida crossing the 10,000-case threshold.

By then, it was becoming clear that the virus would change the world, though no one yet knew how long it would stay or how vast the toll would be. The reckoning had really begun in mid-March: Sporting events and concerts were canceled; the stock market nosedived; Dr. Anthony Fauci, who has led the nation’s battle against infectious diseases for years, designated Florida as one of a few states with community spread; courts and other public entities started closing; and DeSantis ordered bars to close and universities to move classes online.

A month to the day after he announced the first cases, and two days before Florida hit 10,000, DeSantis issued a statewide stay-home order.

State and municipal stay-at-home orders tamped down the spike that emerged in late March and early April. And, for a while, it looked like Floridians were “flattening the curve” — holding up what many had heard was their end of the bargain to get through the pandemic.

By late May, when Florida crossed the 50,000-case mark, daily case numbers were holding steady in the triple digits, and the average positivity rate was trending down. But several signs pointed to more trouble ahead.

Earlier that month, DeSantis had lifted statewide restrictions on restaurants, stores and parks, and people began to congregate in public spaces. Sound methods for slowing the virus’ spread, such as wearing masks and limiting gatherings to small sizes, were increasingly politicized.

And researchers and health officials warned that Florida and other southern states were reopening too soon, setting them up for a summer surge in cases.

Deciding not to heed those warnings, DeSantis continued lifting restrictions.

“We’re just looking forward to getting back to our new normal,” DeSantis said then.

By the third week of June, Florida cases hit six figures. It signaled another wave, and public health officials once again spoke with a sense of foreboding.

“Now, all of those things we were worried about a few months ago are things we’re worried about again — things like our hospitals becoming overwhelmed or the rate of infection to start snowballing,” Pinellas County EMS Medical Director Dr. Angus Jameson said at the time. “We’re not totally overwhelmed by the increases just yet, but if these trends continue I’m very concerned that we could be, maybe in just a couple weeks.”

The state logged the milestone over the same period in which virus hospitalizations hit a record high. Deaths that day topped 200. A couple days later, the Tampa Bay Times published an analysis that found Black residents in Pinellas County were 2.5 times as likely to contract the virus than white residents.

Out and about in Tampa Bay’s downtowns and business districts, pandemic fatigue was playing out in stark contrast. At the end of June, state officials suddenly suspended on-premises drinking at bars, “a necessary step to take to protect public health as we continue working in partnership with industry and health officials to combat COVID-19,” said Halsey Beshears, the secretary of the Department of Business & Professional Regulation.

But that didn’t stop some businesses. Bars and breweries trying to stay afloat got around the restriction by selling food. Others risked fines or loss of alcohol licenses to reopen under the radar. Complaints of businesses operating over capacity or as nightclubs rolled in from across the state.

At the end of August, hundreds of people gathered at the Cuban Club in Ybor City for a sold-out concert. The long Labor Day weekend, with beaches now reopened to the public, loomed.

The highest single-day increase since August bumped Florida over the 750,000-case mark. After a dip in new cases at the beginning of the month, the curve was creeping back up again.

Meanwhile, Floridians waded into fall traditions. Voters and candidates prepared for an especially consequential election. Students logged onto virtual school from home, or returned in person to campuses, where cases seemed to pop up daily. Families gathered around the TV for a disjointed football season, pocked with game cancellations when players turned up positive.

And in Tampa Bay, it was all about hockey and baseball. The Tampa Bay Rays advanced to the World Series, losing in six games to the Los Angeles Dodgers but still bringing a boost to the franchise and its fans.

A few weeks prior to the three-quarters-of-a-million case mark, the Tampa Bay Lightning defeated the Dallas Stars to win the Stanley Cup. Thousands of fans flocked to downtown Tampa for a boat parade, cheering along with a mask-less Mayor Jane Castor. Players and fans took turns drinking from the goblet-shaped trophy.

It’s been a bleak November. Florida, along with nearly every state in the country, has and continues to grapple with rising cases and hospitalizations. At the same time, Florida’s governor has largely disappeared from public view and refused to answer crucial questions from the media.

RELATED: DeSantis won’t answer questions about anything. Where has he been?

The Centers for Disease Control and Prevention issued an advisory urging Americans to stay home for Thanksgiving, but airports were still crowded with travelers. Health experts worried that young people traveling home for the holidays would infect older relatives vulnerable to the virus.

“There will be someone sitting at your dinner table … who may not be with us at Christmas,” said Joanna Moore, a registered nurse in Miami who lost her 79-year-old mother to the virus after a relative visited and exposed her.

November did bring a glimmer of hope. Three pharmaceutical companies announced successful COVID-19 vaccine trials, and the treatments could begin rolling out in a matter of weeks.

But video announcements from DeSantis on the subject lacked details, and neither he nor the Florida Department of Health would answer questions about how vaccines would be distributed or how the state will decide who gets them first.

It kept Florida in a familiar place: looking for light at the end of the tunnel, wondering how much longer or more painful this journey could be.