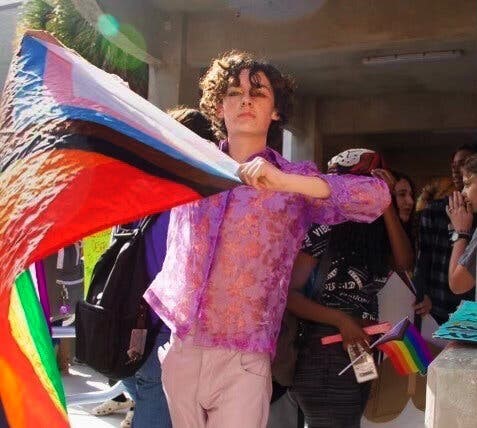 Mr. Larkins is a junior at Winter Park High School in Winter Park, Fla., the president and co-founder of the school’s Queer Student Union and one of the organizers of its Say Gay Anyway walkout.

Last October, I attended a high school Halloween party. A group of guys from my school surrounded me and shouted homophobic slurs. One even threatened me with physical violence. When I broke down crying in class the next day, my teacher comforted me. She told me that she had gone through something similar when she was my age.

On Tuesday, the Florida Senate approved the Parental Rights in Education bill, also known as the “Don’t Say Gay” bill. The bill seeks to ban public schools in the state from teaching about sexual orientation or gender identity from kindergarten through the third grade, or through the twelfth grade in a manner deemed “age-inappropriate” by parents. Had the proposed law been in effect last year, my teacher could have put herself in jeopardy by being there for me.

From an early age I knew I was different. I wasn’t interested in the things other boys my age did, and I didn’t really feel comfortable in the clothes my parents bought me. The struggle for acceptance was not just internal, it also felt like my classmates didn’t know what to make of me. By fourth grade I was convinced that I was broken. I didn’t know how to defend myself when other kids made hateful comments or bullied me — I didn’t know why I was the way that I was. Without the vocabulary to articulate why I felt and acted like this, I assumed what they said about me was true. For most of the kids in my grade, I was the only kid like me they knew.

My life changed the summer before seventh grade. A girl at an arts summer camp turned to me on the first day and asked, “Are you L.G.B.T.Q.?” She explained what each letter meant and showed me pictures of RuPaul on her phone. It felt like a weight had been taken off my shoulders. The realization that I wasn’t the only one saved my life. I remember stepping away and calling my best friend at the time: “Max, I think I am gay.”

When I came home from camp, I became fascinated with learning more about queer culture. I read about Georgia Black, a Black trans woman who lived close to where I do now in the early 1900s, and I learned that in pre-Colonial times, more than 150 Indigenous tribes acknowledged third genders in their community and three to five gender roles: female, male, Two Spirit female, Two Spirit male and transgender. I realized how common the experience of falling outside of the gender binary was. As I learned about the history and culture of my community, I grew to understand and love myself. Education made me hate myself less.

I have come to realize that those who have been so openly hateful toward me often knew little about the queer community — they thought being L.G.B.T.Q. was a conscious choice. Education didn’t just give me a sense of self worth but also the knowledge of a community and lifeline there for countless young people.

L.G.B.T.Q. teens are four times more likely to commit suicide than their straight counterparts. According to the Trevor Project, a crisis intervention and suicide prevention organization for young gay, lesbian, bisexual, transgender and queer people, teens who learned about L.G.B.T.Q. issues or people in school were 23 percent less likely to attempt suicide. We have a mental health crisis in the queer community, and Gov. Ron DeSantis and the Republican Party want to outlaw the solution.

I am lucky to have supportive parents, but I am in the minority among my peers. Research has shown that L.G.B.T.Q. teens have a higher risk of experiencing some form of homelessness, with family conflict being the primary cause. Many of my close friends have been thrown out of their homes after coming out to their parents or being outed by others. One of my best friends even stayed with my family for three weeks after he was kicked out of his home because his parents refused to accept that he was trans. Other friends have told me disturbing stories of being physically abused or worse because they strayed from traditional gender norms.

On Feb. 28, I spoke out against the bill on the senate floor, and on Monday my friend Maddi Zornek and I led a walkout of more than 500 students at our high school. Republican lawmakers have been echoing the idea that parents know what is best for their kids, not the schools. In some cases that may be true. But parents aren’t trained professionals; unlike schools, they aren’t made to follow a set of standards. For many of my friends in dangerous situations because of their sexuality or gender identity, school has been a space where they could be themselves.

Now, under threat of lawsuits, districts, schools and teachers may be hesitant to talk at all with students about gender identity and sexuality, even if the conversation is “age-appropriate.” The bill also allows the state commissioner of education to implement a “special magistrate” so that prosecuting those in violation of the law would happen much faster than in a normal court.

When I look back to elementary school, I wonder how different my childhood would have been had my classmates and I known that I wasn’t some tragic anomaly, a strange fluke that needed to be fixed. People in support of the bill always ask, “Why do these subjects NEED to be taught in schools?” To them I would say that if we understand ourselves, and those around us understand us, so many lives will be saved.

Will Larkins (@ProudTwinkie) is a junior at Winter Park High School, the president and co-founder of the school’s Queer Student Union and one of the organizers of its Say Gay Anyway walkout.

Image Credits: The author leading a walkout at his high school last Monday. By Macey Woodburn