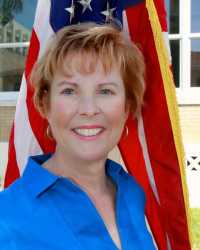 There is a saying that if you want anything done, ask a busy person to do it. Teresa Jenkins is one busy lady. She supports several Punta Gorda and Charlotte County community endeavors. She is a prolific writer, contributing frequently to the Democratic website and the Sun Newspaper. She is a published author, a consultant, and an avid golfer. Her current role as Charlotte County Democratic Party Chair is a natural fit after a long career in government.

Teresa and her sister grew up with her parents and grandparents on a farm in rural Maryland. She loved helping her father raise chickens and cattle and harvest wheat, corn, and tobacco. She attended a private Catholic school with a graduating class of 20. “By the 8th grade, I thought I might want to go to college. Neither of my parents saw the need and I didn’t get much encouragement from the school counselor.” She began attending classes at a community college in the evenings and summers while working full time.

“I was influenced by the political changes in the turbulent ’70s. I saw the impact on rural families and economic opportunities.” With an interest in environmental issues and human resources, she continued her education at the University of Maryland, earning a B.S. in Business Management, followed by a Master’s from Strayer University—all while working full time to pay for her education.

“My first job after college was with the U.S. government. Later in my career, I was responsible for the Defense Department’s Overseas School, hiring K-12 educators for military families based overseas.” Teresa continued to be promoted throughout the federal government, and under the Clinton administration, she worked with his Cabinet secretaries to devise human resource policies for two million federal workers. “I was also responsible for policy development for federal employees working from home and testified before Congress on federal telework progress. I continued this work during the Bush administration, until 9/11.” Teresa then helped establish Homeland Security, writing much of the law for labor-management relations.

Teresa said she never planned to write a book about politics. She spent 4 to 5 years reading and taking notes about current events—locally and globally—trying to make connections to other areas. After accumulating several notebooks, she thought it might be worth publishing. “Make Democracy Work Again: A Blueprint for the 2016 Election and Beyond“, was an Amazon bestselling political reference book. The book provides insights into the U.S. political environment and provides solutions to make democracy work again. She also enjoyed writing a non-fiction book, titled “Cranberry Lake“.

After retirement, Teresa started a consulting company, JenNel Corporation, advising federal agency executives on workforce and strategic planning. Teresa and her husband moved to Punta Gorda in 2008 and she continues some consulting work. According to Teresa, “Being semi-retired, I read an article in the local paper that the Charlotte County League of Women Voters was about to collapse. A friend and I decided to join and turned it into a successful organization, rapidly securing donations and members.” Teresa’s next stop was Director of the Florida League of Women Voters, where she was a state-wide advocate for Medicaid expansion.

Currently Chairwoman of the Charlotte County Democrats, her message to voters is “GET OUT AND VOTE. Florida’s 29 electoral votes hinge on Charlotte County and other key counties to get Joe Biden elected. Don’t think that your vote doesn’t matter—it does!”

Teresa said, “I encourage anyone interested in volunteering to reach out. We have a great team with great ideas. There are so many opportunities, just do what you like to do! You will have fun and meet a lot of great people. Join the party/Party!”  To volunteer,  complete the form by clicking here.

Watch Teresa Jenkins explain why you should join the Democratic party,  why she is optimistic, and the role of government to improve society.