Gov. DeSantis takes on how racial history is taught in Florida schools 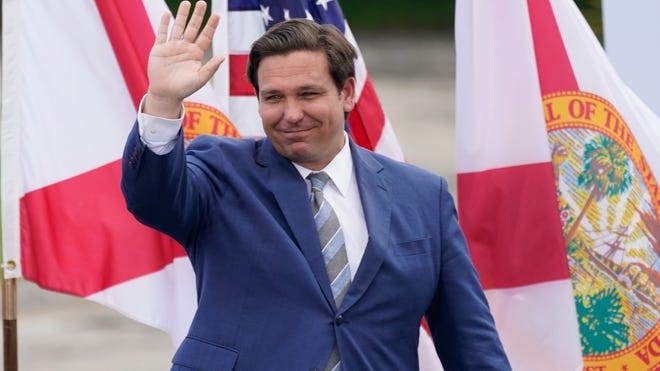 TALLAHASSEE – Gov. Ron DeSantis is poised to declare victory on another front in what critics call a culture war  – with his administration expected to approve new limits on how racial history is taught in Florida schools.

Now, a rule going before the Florida Board of Education on June 10 is intended to endorse DeSantis’ view that teachers should not be “indoctrinating kids with fad-ish ideologies.”

“They’re supposed to be teaching the basics and let them make sense of this for themselves,” said DeSantis, after signing into law a new crackdown on social media platforms, a measure sought by many defenders of former President Donald Trump.

Sounding alarms about critical race theory has emerged as a key talking point nationwide for Republican candidates courting cultural conservative voters. DeSantis is up for re-election next year and is widely viewed as a possible White House contender in 2024.

The governor’s latest demand comes after he has capitalized on issues popular with a Republican voting base still loyal to Trump, who last year restricted diversity training at federal agencies that used critical race theory principles.

In the past few weeks, DeSantis has signed into law enhanced criminal penalties and new offenses for violence occurring at demonstrations, a move that followed Black Lives Matter protests, new election standards decried by Democrats as harmful to minority voters, and the social media provision – all now the subject of lawsuits in federal courts.

Critical race theory developed among legal scholars in the 1970s but has gained fresh attention with the Black Lives Matter movement. Republican leaders have cast Democrats supporting the theory as radical.

It effectively argues that systemic racism was part of this nation’s founding and continues to negatively affect people of color at all levels. Opponents like DeSantis counter by saying that when included in classroom instruction, critical race theory teaches students to disparage the U.S., while it also fosters racial divisiveness.

Educators, though, warn the proposed state rule will have a damaging impact on the free exchange of ideas in school.

“Critical race theory has nothing to do with hating America, but has everything to do with being true and honest about the history of the United States,” said Dr. Dana Thompson Dorsey, a University of South Florida education professor who has consulted with schools on racial equity and cultural bias.

Legislation restricting or banning components of critical race theory has been proposed in 15 states and approved in four of them.

Tennessee’s new law allows for public funding to be withheld from districts that teach students about white privilege. DeSantis indicated he’d also be willing to sign a law that keeps dollars from counties that allow critical race theory principles to be included in classroom instruction.

“Critical race theory is race essentialism,” DeSantis said. “It teaches people to view (race) as the most important characteristic. And obviously if you’re certain races, Caucasian and what not, they view that in a negative fashion. That’s not something appropriate for schools.”

Thompson Dorsey said imposing such restrictions is a disservice to students.

“All of this legislation… is erasing history,” she added. “We’re un-educating students, keeping true and honest history from students. We have some states now talking about producing textbooks that don’t talk about slavery.”

The rule going before the Board of Education says that instructors may not “define American history as something other than the creation of a new nation based largely on universal principles stated in the Declaration of Independence.”

But it also demands that teaching should be “factual and objective and may not distort or suppress significant historical events.”

Andrew Spar, president of the Florida Education Association, the state’s largest teachers union, called DeSantis’ characterization that instructors were “indoctrinating kids” a slap in the face. He said that teachers already adhere to a code of conduct that specifically prohibits such action.

Still, Spar said the rule would have a chilling effect when it comes to many classroom discussions, particularly involving race, constitutional rights and many episodes in the nation’s history.

“It seems intent on limiting what we teach in civics and social studies,” Spar said. “I think it’s obviously about opening a door to say that someone is violating this rule and they can be disciplined.”

Spar also said he found irony in the rule demanding that classroom instruction should be factual and objective.

“Is it all of the facts or just some of the facts?” he said. “There appear to be some people who want some facts talked about, while others are ignored.”