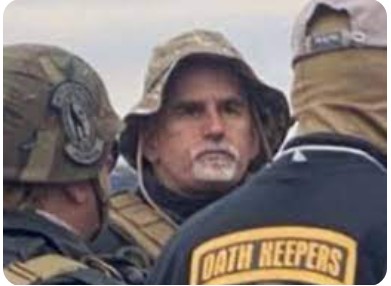 The following editorial was published in The Daily Sun on Nov 4, 2022.

OUR POSITION: Englewood’s Graydon Young is likely a good example of how people caught up in rhetoric and social media posts can be led to ill-advised actions.

Graydon Young pictured himself as an insurrectionist, storming the Bastille during the French Revolution.

In testifying this week in the seditious conspiracy trial of Oath Keepers founder Stewart Rhodes and four associates, he talked about how he was caught up in the momentum Jan. 6, 2021, when he and other followers of Rhodes stormed the Capitol. He saw similarities between what he felt was a crooked 2020 presidential election and the tyranny French peasants were trying to overcome.

Even before the day was over, however, he realized his mistake.

“I’m really sorry for what I did,” Young said from the witness stand according to a story in The Daily Sun.

The Englewood man has pleaded guilty to conspiracy to obstruct Congress when he and fellow Oath Keepers tried to override the certification of Joe Biden’s 2020 election victory. He has admitted he committed crimes that day.

“I won’t do anything like that ever again,” he said. “It’s really embarrassing.”

We’ll take Young at his word. Some might question his sincerity and whether or not he is seeking leniency from the court.

To hear him talk about his actions and the impact they had on the nation, we believe he is truly contrite. We only wish more people who participated in that attack on the Capitol could embrace the damage that was done to democracy and all that America stands for.

To read Young’s testimony of what happened that day in the Associated Press account, it is obvious how members of the Oath Keepers and others got caught up in the momentum after attending a “Stop the Steal” rally that included an address by President Donald Trump.

When he learned the crowd had breached police barricades at the Capitol he said “we all knew that there was the potential for a historical event to be taking place at the Capitol.”

After overwhelming police and getting inside, he said he became scared, realizing how much trouble he was in after the riot.

Young, a veteran of the U.S. Navy reserves, said YouTube videos fired him up for the trip to Washington, D.C.

When it was all over, however, Young said he became concerned about potential legal issues and burned the gear he wore when he breached the Capitol.

“That’s when the embarrassment about the whole thing kicked in … I’m going to have to tell my mom,” he said.

There’s a lot to be learned from Young’s experience and his regrets.

Unfortunately, there are too many who still believe violence is the only way to express and fight what they think is corruption in government. Too many believe what they read on the internet is all true. Too many who don’t feel their vote is the best weapon they have. Too many who are content to follow others’ lead instead of searching for the facts themselves.

We rarely, if ever, address national issues in Our View. But Young’s experience and his revelations about being drawn into the conflict and the social media campaign that influenced him were worth addressing, we believe.

There are tens of thousands more Graydon Youngs out there. And many, probably most, will never see the error of their ways until it is too late.