HB 1, the “anti-protest” bill continues to progress in Tallahasee 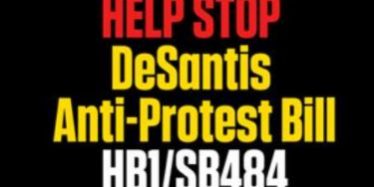 Two bills in this season’s Florida legislative session present more problems for the Democrats than most of the other bills. One is SB 90, the “Anti-Voting” bill and the other is HB 1, the “Anti-Protest” bill.

Please call or send a short email ASAP! These two bills may become law sooner than we expect (or want). Many thanks for your continued assistance.

HB 1 — the “anti protest” bill — was moved to the Senate Appropriations committee where Kelli Stargel is Chair (Republican). If the House bill language is adopted, the companion bill SB 484, which has not yet been heard in a committee, is a moot point and the Senate can move ahead with HB 1 in a floor vote before sending it to the Governor for approval. HB 1 is not yet on the Senate Appropriations schedule, but I expect we will see it scheduled for next week.

Here are your talking points regarding HB 1:

Please contact members of the Senate Appropriations Committee below ASAP and urge 1) Chair Stargel to refrain from hearing this bill; and 2) contact the other members to vote “NO” on this anti-democratic bill if it is scheduled.