How gun violence changed my father (Ronald Reagan) and our family 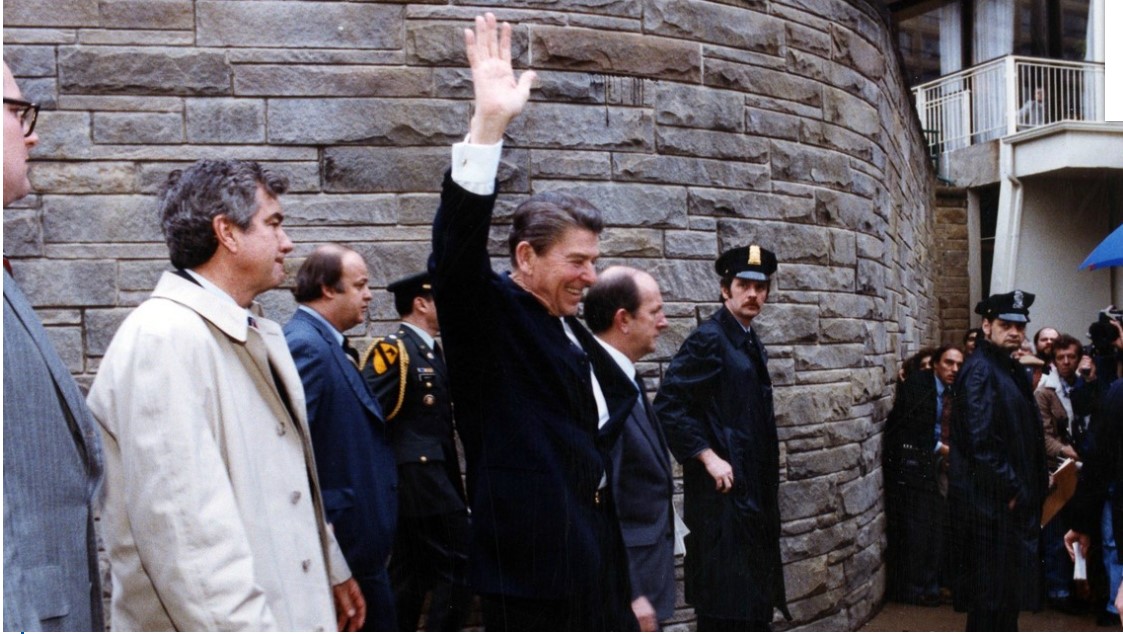 Ms. Davis is an author and the daughter of President Ronald Reagan.

Forty-one years ago, on a cold, drizzly day in Washington, four people were shot by a young man who had concealed a gun in his jacket. This was long before mass shootings became a frequent reality of our lives. It was long before semiautomatic weapons became commonplace. There were many “good people with guns” there that day. It made no difference. Four men were shot in a matter of seconds. I am the daughter of one of those men, Ronald Reagan, who came incredibly close to losing his life because the bullets John Hinckley loaded into his gun were devastator bullets, meant to fragment. Meant to kill more efficiently. One of those bullets blew apart James Brady’s head; he was never the same.

The gun used was a Röhm RG-14 revolver. It fit neatly into a jacket pocket. In the decades since that day, I have lived with a fear of guns, especially concealed guns. Now that fear has expanded to assassins in tactical gear with AR-15-style rifles storming grocery stores, schools, churches, theaters — anyplace, really — and mowing down scores of people in minutes. It is no comfort that my fear is shared by so many Americans. In fact, that adds another dimension. We are, increasingly, a country gripped by fear: It weakens us, gnaws at our confidence, makes us more vulnerable than resolute.

When the Supreme Court ruled recently that Americans have a right to carry a concealed handgun in public, something froze in me. It won’t just be the sketchy-looking guy with a backpack who sets off alarm bells, or the person wearing a big jacket on a blazing hot day. It might also be the nondescript person who barely gets noticed, who suddenly reaches into his pocket for a gun. Someone like John Hinckley, who blended in until he didn’t.

Years ago, someone quoted to me a statement they attributed — probably apocryphally — to the Romanian dictator Nicolae Ceausescu. The quote was, “You can do whatever you want if you keep the people frightened enough.” There are people in America who know this and are counting on it. And to have a country in which everyone is scared of who might be legally carrying a gun as they walk through their daily lives means we have a weakened country in which anything is possible. Fear is a breeding ground for autocracy, and history shows us that every democracy that has crumbled did so in an atmosphere of fear.

But fear is not one-dimensional. There is a healthy version in which we learn caution; we learn what to stay away from.

It was my father who taught me to have a healthy fear of guns. I grew up in the 1950s, when television staples were Westerns like “Gunsmoke” and “The Life and Legend of Wyatt Earp.” The men had guns, someone was always getting shot, and they would clutch their wounds and keep on fighting. My father was determined to educate me about certain realities compared with what we were watching. Every time, he would say things like: If that man were really shot in the shoulder at that range, half his arm would be blown off. Or: He was just shot in the thigh. He would not be limping along. He’d be bleeding out. I learned about the femoral artery at a ridiculously young age.

Before I was born, my father obtained a permit to carry a concealed gun. It was 1947; he was the head of the Screen Actors Guild and it was a time of anti-Communist fervor and intense labor disputes. He had gotten threats that acid would be thrown in his face. His tires were slashed on one occasion. He said he wore the gun in a shoulder holster and it was a horrible time in his life. It was necessary, he said, but it didn’t really make him feel safer. It was a constant reminder of how life can take a frightening turn, and he didn’t like living in fear. He knew how corrosive it is.

On the day my father was released from the hospital after John Hinckley nearly killed him, my mother and I escorted him out. The world saw him confident, unafraid. What you didn’t see was the Secret Service putting a bulletproof vest on him in the hospital room, carefully strapping it over the long incision on his chest. That evening at dinner I asked him if he would now endorse stricter gun control legislation. My father had a stubborn streak, and he answered no, that stricter laws wouldn’t have prevented what happened. By 1991 he had changed his mind, supporting the Brady Bill and writing an Opinion essay for The New York Times saying, “This level of violence must be stopped.”

Despite bravely staring down his fear, my father did make some concessions to it. He rarely attended church services. He said he was afraid he would be putting other people in danger. I thought about that decades later, in 2017, when, after receiving death threats following the publication of several of my journalistic pieces, I decided to stop running my support group, Beyond Alzheimer’s. I’d run it twice a week for six years, the schedule was public, anyone could walk in, and I was increasingly haunted by the possibility that I could be putting others at risk. One of the threats against me was credible enough that I contacted the F.B.I. I remember after the Pulse nightclub shooting, sitting in the support group with my stomach in knots, unable to shake how vulnerable I thought we all were.

You are never the same after gun violence has touched your life. From the deepest wounds of those who have lost children, loved ones, friends — most recently in Uvalde and Buffalo — to the survivors, like the kids from Parkland whose lives have been changed forever, lives are never the same. You wonder when it will happen again; there is a part of you that’s always watchful, always suspicious of strangers. You get jumpy when someone reaches into a backpack. Increasingly, because shootings have become so common in America, almost all people carry around that fear, even if their own life hasn’t (yet) been touched by gun violence.

Democracy thrives when citizens feel emboldened by their country, when they feel confident in their freedoms and in a government that exists to make their lives safer, not more at risk. Democracy dies in the dark waters of fear, and that’s where we are — swimming for our lives, wondering why a strident minority wants us to drown.

Image Credits: This photo taken by presidential photographer Mike Evens on March 30, 1981 shows President Ronald Reagan waving to the crowd and Jerry Parr (left) just before the assassination attempt on him, after a conference outside the Hilton Hotel in Washington, D.C.. Reagan was hit by one of six shots fired by John Hinckley, who also seriously injured press secretary James Brady (just behind the car). Reagan was hit in the chest and was hospitalized for 12 days. Hinckley was aquitted 21 June 1982 after a jury found him mentally unstable. (Photo credit: MIKE EVENS/AFP/Getty Images)